Picture yourself at Jet 19 in New York City in the ‘90s. Or at Shine, or Sky Bar, or Veruka. No matter the upscale club/restaurant, the scene remains the same. You’re sitting at a table when the ambient noise of conversation seems to fold in on itself. It doesn’t get less quiet, just more focused, as if the center of gravity in the room has changed. A young man with immaculate, semi-long hair, wearing a Michael Jackson “Black or White” era white button-down, struts through the restaurant, being led to a table in the back corner by a maitre'd and a pair of good-looking waitresses. “That’s Leo,” your dining mate whispers to you, as if you didn’t know. Titanic just came out—and Leo just went from being that boy in What’s Eating Gilbert Grape to the boy, an ultimate heartthrob with industry cred as well. Everyone knows who he is. But who are those guys filling up his table, the vaguely handsome ones following him with innate loyalty and wide-eyed devotion?

In the mid-’90s, a group of young actors kept bumping into each other at auditions. Leonardo DiCaprio, fresh off small roles on Growing Pains and Critters 3, would run into Tobey Maguire, Lukas Haas, and Kevin Connolly. But instead of becoming rivals, they banded together. “A little competition rose up between them,” an anonymous actor told Nancy Jo Sales in her legendary New York profile, “Leo, Prince of the City.” “They were always betting on who would blow up first.” “Making it” was primary among the group, but as can be expected of any bright, young, good-looking group of guys with the world at their fingertips, having fun and being seen was almost as important. Nights out would include sneaking into Victoria’s Secret events in New York City, impromptu trips to Vegas, setting off stink bombs at Sky Bar, and always, chasing girls. “They’re all about seeing the girls,” a photographer told Sales. And so eventually, as the group became more famous—for their roles and their partying—Hollywood circles dubbed them with a name they still carry today: the Pussy Posse.

DiCaprio was twelve when he and Tobey Maguire became best friends. After meeting him through auditions, DiCaprio was drawn to Maguire because of their shared experiences—both were raised in Los Angeles by single mothers. “When I want someone to be my friend, I just make them my friend,” DiCaprio told Esquire in 2014. When 12-year-old DiCaprio saw Maguire shooting in L.A., “I literally jumped out of the car. I was like, ‘Tobey! Tobey! Hey! Hey! And he was like, ‘Oh, yeah—I know you. You’re…that guy.’ But I just made him my pal.” From there, DiCaprio and Maguire befriended other actors in their peer group—Connolly, Haas, Jay R. Ferguson—as well as guys in or on the fringes of Hollywood, like director Harmony Korine, street magician David Blaine and A Tribe Called Quest rapper Q-Tip. 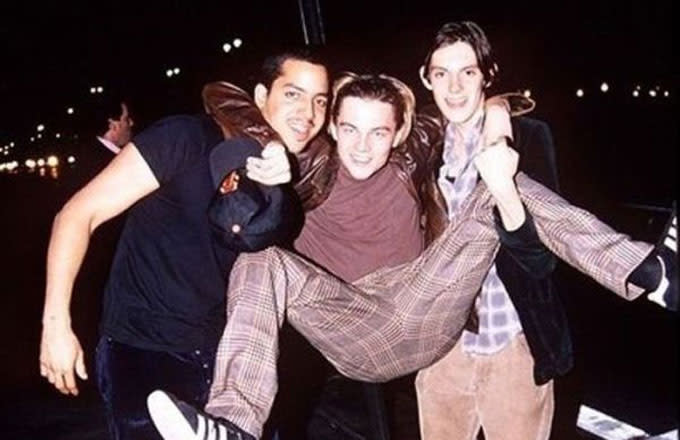 It’s relatively easy to play armchair psychologist and analyze the way DiCaprio built his friend group: how he turned potential enemies into friendly (and perhaps unaware) competitors; how this man with an absentee father made it a point to craft a posse of men, men who would have an intricate understanding of his life experiences—the fame, the way Hollywood works, the women; how he’d give this group every part of himself and in turn let it create an impenetrable bubble around him. “I really like to have sweet people around me,” DiCaprio told Detour magazine in 1996. “I can’t stand badasses. There’s too many of them, especially at my age in L.A. and...you have to peel away so many layers of those people.” The Pussy Posse was formed, yes, to chase pussy, but at least for DiCaprio, it also existed to protect him.

Because whether or not he’s ever acknowledged it, the clear center of the group is DiCaprio, a fact that has either always been true or became true. He beat out fellow Posse member Lukas Haas for roles in This Boy’s Life and What’s Eating Gilbert Grape (Haas to Texas Monthly in 1996: “We’re both very lucky. Why should I want to be him?”). He landed juicy roles working alongside Robert de Niro and Meryl Streep while the other guys remained mostly in the dark. And then, he got Titanic. After playing Jack Dawson and launching himself to the top of every teen girl in America’s list, DiCaprio was easily the leader of the Pussy Posse. “The Titanic stuff has caused this big identity crisis,” the anonymous actor told Sales. “Some of them have completely lost their careers. All they do now is hang out with Leo.”

Not that that was ever a bad way to live. DiCaprio had his friends through the doors of clubs that Mariah Carey had to wait in line for; Posse members got to fly to Australia when DiCaprio was shooting Romeo + Juliet; they had an endless amount of women, both famous and not, lining up to be with them. They got to have more fun than anyone else, so long as they had DiCaprio’s back. And maybe agreed to hold onto his money. ”They get off on protecting him,” paparazzo John Barrett told Sales. “They’re always ready to start yelling and swinging.” 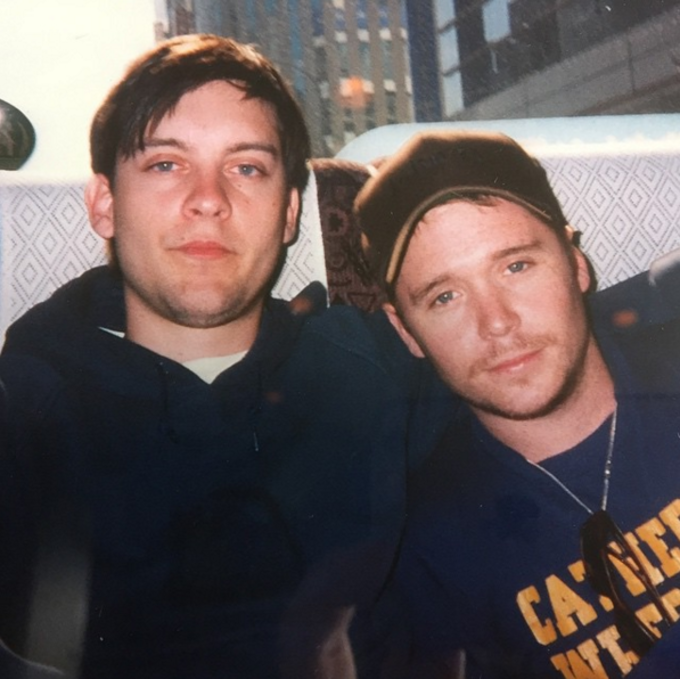 One such night where the Pussy Posse’s combination of shameless conquest and rush to fight for Leo came together happened shortly after Titanic made DiCaprio Hollywood’s biggest star. The actor, along with his Posse friends, spotted Elizabeth Berkley of Saved by the Bell and Showgirls fame at the premiere for The Man in the Iron Mask and decided she needed to be partying with them. As they surely did a thousand times before with a thousand different girls, the Posse sent L.A. publicist Karen Tenzler to corral Berkley. “She said, ‘Jay Ferguson and Leo are going crazy for you, and they want you to come to Elaine’s after this,” Berkley told Sales. The only problem? Berkley was dating actor Roger Wilson, which DiCaprio and Ferguson knew. As did Tenzler: “Without Roger,” she specified to Berkley. Berkley balked, and the day after got bombarded with calls from Ferguson and Tenzler until Wilson tried to step in. “I said, ‘Look Jay,’” Wilson told Sales. “‘I know you guys are having a great time and the town is your apple—but not this part of town.’”

There was a pause, and then Jay responded: “Fuck you, you fuckin’ faggot motherfucker, we’ll call whoever we want and if you don’t fuckin’ like it, why don’t you come down here and tell us to our face?” And so Wilson did.

Wilson rolled up to Asia de Cuba in New York City to find DiCaprio and Ferguson at a back table, enjoying themselves along with the likes of Julia Ormond and several other Posse members. After Wilson and Ferguson agreed to “take it outside,” DiCaprio was reportedly overheard saying, “Let’s go kick his ass.” Before a fight could even happen though, someone—someone who Sales heavily implies was DiCaprio—punched Wilson in the larynx. The posse “went crazy, saying ‘Oh, no, oh, no, this can’t happen!’” Wilson said. “They jumped on the guy and threw him back in the hotel. I never saw the kid again.”

For every time the Pussy Posse has fulfilled the ideal male fantasy—because seriously, what guy doesn’t want to pop bands with his best friends and an interchangeable cast of beautiful women every day—there have been notes of darkness. They got to have a ton of fun, of course, but sometimes that fun involved “Leo throwing litter off the Brooklyn Promenade onto cars traveling below on the BQE.” And then there’s Don’s Plum, a movie starring, produced, written and directed by the Posse that was so offensive that Maguire and then DiCaprio, both likely anticipating the PR mess that lay ahead, worked to block the movie’s release. In a suit against DiCaprio and Maguire, Don’s Plum producer David Stutman accused the two actors of using their (and by “their” I mostly mean “DiCaprio’s,” because it was 1998, four years before Spider-Man) influence to dissuade Miramax from distributing the film and Sundance Film Festival from screening it. “Maguire and his manager had determined that, in the Film, Maguire did not come off as strong a ‘leading man’ as DiCaprio and that some of the improvisational comments Maguire had made during the Film revealed personal experiences or tendencies that would undermine the public image he and his manager were trying to project,” Stutman’s lawsuit read. Eventually, both parties reached a settlement that resulted in Don’s Plum only being released outside of the United States and Canada (though, another of the film’s producers is now hosting the movie for free on a website called freedonsplum.com).

Maguire and DiCaprio were right to be worried about how they come off in Don’s Plum, a movie so overtly misogynistic that also feels like such a close reflection to how the Posse probably talked and acted in real life. In making a movie with each other, the Pussy Posse accidentally brought their secret, back-table debauchery to the forefront. “Stop looking at me like that—I’ll fucking throw a bottle at your face, you goddamn whore,” DiCaprio says to a girl in tears, while Maguire and Connolly laugh. Jack Dawson, America’s teen idol, can’t be talking like that. (It’s somewhat ironic that in 2005, almost a decade after DiCaprio uttered that line in Don’s Plum, model Aretha Wilson attacked him with a broken beer bottle. Wilson’s attorney claimed that Wilson was defending herself after DiCaprio took a swing at her for calling DiCaprio and the Posse “a bunch of fags.”)

There are things to like and admire about the Pussy Posse. The camaraderie is relatable, and representative of male friendship in general. It’s almost sweet the way the Posse members have leaned on each other, especially the way DiCaprio has relied on his friends to protect him and used them as some sort of mobile feeling of home. But could something this male-centric, this exclusively XY (actress Sara Gilbert has been called an “adjunct member,” but she strikes me as someone the Posse has deemed cool enough and homely enough, and, you know, gay enough, for them to hang out with Platonically) not have an underbelly? The Pussy Posse were the coolest guys in the club—the ones having the most fun—but they were also assholes, fucking hooligans; guys who liked to steal other guys’ girlfriends, be obnoxiously aggressive for the fun of it, and see women as second-class playthings. They’re a group that’s funny to think about, but troubling to actually think about.

In 2015, the Pussy Posse really only exists as a relic of the ‘90s, immortalized by New York magazine and the little-seen Don’s Plum. The group that DiCaprio built around him is fractured. While he hops from Blake Lively to models Erin Heatherton, Toni Garrn, and Kelly Rohrbach, because apparently 41 is the new 26, the rest of the Posse has grown up. Tobey Maguire is married with two kids; Jay Ferguson is married with three kids; Ethan Suplee is married with four kids; Harmony Korine is married. Even DiCaprio has grown up somewhat—once the kid who threw garbage onto the BQE, he now spends millions every year to promote environmental awareness. The guys all still hang out, but it just isn’t the same, no matter how many Robin Thickes or Jonah Hills are added to the mix. And it’ll never be like it was just after Titanic ever again. For those who lived and died in them furious days, it’s like everything was mightily swept away.