Do you ever let your mind wander to unrealistic places? For America's normal folk, imagining a grandiose living is quite easy. Culturally, we equate our sense of worth with however many zeros are at the end of a bank statement. When the lottery gets up into the hundreds of millions and becomes a local news story, figuring out exactly what you're going to spend the money on (because you're going to win it, of course) is an enjoyable, but hopelessly pointless thought exercise.

At Complex, however, we're fully committed to aiding and abetting pointless things. That's why today, in the latest entry to our "Ask Complex" series, we've got our sights set on a topic that's truly worthy of your imaginary lottery winnings: FIFA. As John Oliver taught America, FIFA is one of the most corrupt organizations on the planet. They're seemingly always down to make moves in their own self-interest, especially if those moves have a kickback at the end of them. Given the level of widespread corruption throughout FIFA—particularly concerning World Cup bids for Russia 2018 and Qatar 2022—the latest question presented by our readers is curious, but more than worthwhile:

How much would it cost to bribe FIFA? —Rimesh, L.A.

If I won the lottery tomorrow, my first phone call wouldn't be to my parents—it'd be to our pal Sepp Blatter. As FIFA's president/overlord, he's presides over hundreds of soccer officials who are always looking get a bit more out of their jobs. If there's a rich person to shake down in exchange for the hand of a FIFA executive, that FIFA executive will grab em by the ankles, only letting go for millions of dollars.

Putting an explicit number on how much any potential FIFA bribe would cost is conjecture, but in briefly looking at the alleged history of a handful of corrupt high-profile FIFA executives, a ballpark figure can be deduced. If you're thinking that a few thousand dollars will be sufficient, don't expect anyone in Zurich to return your phone call.

FIFA's corruption has found itself in the media spotlight as of late. Over the past few years, outlets like the BBC, Sunday Times, ESPN, and Fox Sports have all released their own reports of alleged bribery within FIFA. These stories, in addition to Michael Garcia's internal investigation of FIFA's bid selection process for the 2018 and 2022 World Cups, make it abundantly clear that Russia and Qatar, the respective hosts for 2018 and 2022, paid their way to the promise land. Here are a few such recent reports, accompanied by the dollar figure involved in the bribe:

Purchasing power in FIFA not only takes a lottery winner's wealth, but also a demagnetized moral compass.

Still want to buy a slice of the beautiful game? Bidding starts at $1 million. The bribe may begin with a kickback or a shady wire transfer, but it doesn't just stop there. Purchasing power in FIFA not only takes a lottery winner's wealth, but also a demagnetized moral compass. —Justin Block (@JBlock49) 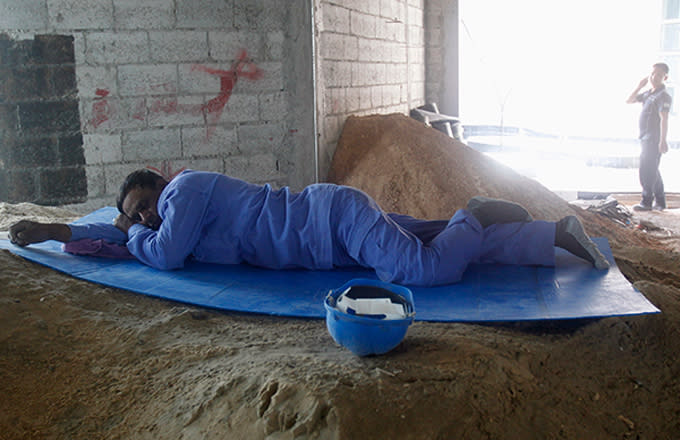 Unfortunately, the answer is clear. The 2022 World Cup is set to take place in Qatar, and even though that’s almost eight years away, there’s already plenty of evidence to raise some serious questions about FIFA and its leader President Sepp Blatter.

For starters, when you type the words “fifa qatar” into Google, the three of the first four suggestions that come up after the words "fifa qatar" are "scandal," "corruption," and "investigation." So take your pick. A closer examination of what’s been going on in the Emirate, as well as within FIFA’s own house, reveals a very ugly truth.

According to ESPN’s investigative program E60: Trapped in Qatar—​nailed it, Bristol—​the majority of infrastructure being built for the games is being done so by migrant workers. Nepal, the Philippines, India, and Sri Lanka are the main countries providing this work force. A work force that is taking deadly hits at an alarming rate.

Last year, 184 Nepalese workers died from shitty working conditions and sweltering heat. Overall—​and here’s the real fall off your couch figure—​ESPN estimates that we’re looking at no fewer than 4,000 total migrant worker deaths before the first ball is kicked in 2022. Let that sink in for a few. And mind you, this projection was made last May, with just one of the 12 new stadiums having undergone any amount of construction. The Nepalese alone have died at a rate of one worker every two days in 2014.

who’s speaking out against this farce?

In case you were wondering, Brazil suffered eight recorded deaths in relation to stadium construction for the 2014 World Cup. Eight. Total.

The Qataris, who have more money than you can imagine, have the audacity to claim that there has been a grand total of zero worker deaths since construction began. Zero? Really? Wake up, people. This is happening right now, and aside from investigative reporting like that of ESPN, who’s speaking out against this farce?

FIFA, who are just about as disillusioned as Qatar, allowed Michael Garcia, head of the world governing body’s investigative chamber of the ethics committee, to do an independent search into the bidding process for both the 2018 and 2022 World Cups. But Sepp Blatter, who has been in charge since 1998, later said the report wouldn’t be published as a result of witness confidentiality concerns.

Just this past Tuesday, Blatter announced that Qatar’s World Cup would stay put no matter what, despite the existing and future reports of horrid worker conditions. Does this feel like the final nail in the coffin to anyone else?

How much does it cost to bribe FIFA?

It takes more than just money. Let’s say 4,000 x 12 = 48,000 lives.  Factor in the billions Qatar spent to showcase their sporting acumen to the world, both legally and sketchily, and we’ll say it costs 48,000 lives, the full reach of a nation built on wealth and migrant workers' backs, and all the drones roaming the planet. – Adam Silvers (@silversurfer103)