Today a jury decided not to indict the police officers who fatally shot a 12-year-old boy playing with a toy gun at a park in Cleveland last November. His name was Tamir Rice. After the drawn out case was decided today case prosecutor Timothy J. McGinty called the fatal police shooting "a perfect storm of human error." Well it was clear skies for Elaine Rothenberg a 66-year-old white woman who pointed a gun at police officers, yelled "Boom boom boom!" and was arrested.

According to WFSB Rothenberg stood outside the Torrington Police department wielding a BB gun which Jezebel describes as looking: "…very much like a pistol, without the orange tip sometimes used to flag replica guns as fake."  Here's the gun: 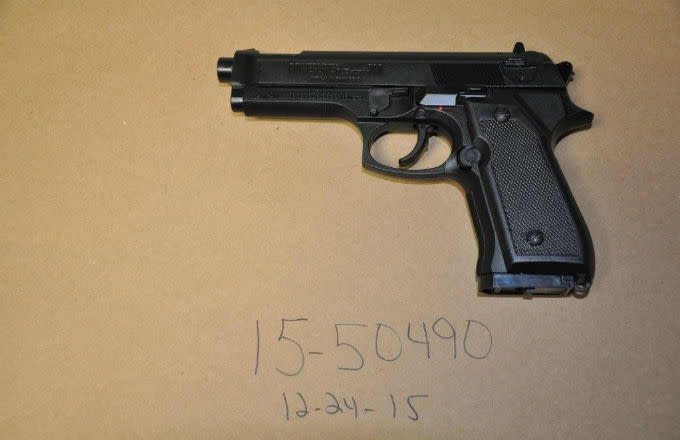 The realistic looking gun nor the not-at-all fragile adult-sized white woman apparently weren't physically threatening to police, despite Rothenberg reportedly taking a "shooting stance" when aiming the BB gun—which she is said to have bought that same day—at police officers. Torrington police said Rothenberg had pointed the BB gun at two civilians and asked if they were police before her meeting with the police. WFSB reports Torrington Police continued to not shoot Rothenberg even when she yelled about her hatred for police. "What are you doing? Shoot me! What are you, scared?" Rothenberg yelled.

Police arrested Rothenberg after she released the gun. Jezebel writes Rothenberg faces charges for: "first-degree threatening (a felony, also known as terroristic threat), as well as interfering with an officer and reckless endangerment, both misdemeanors."