After every game athletes are expected to spout mindless cliches for postgame interviews. Sometimes they're interesting. Most of the time they're not. But there are consequences for not fulfilling your obligation to thank god for a win, or to tell the world you're just taking things "one game at a time."

The NFL reminded the notoriously tight-lipped Marshawn Lynch of that after his team pulled out an overtime victory over the Green Bay Packers in the 2014-15 NFC Title Game. In a move that went unreported by...everyone, the league fined Lynch $75,000 for his refusal to utter a word on that particular January Sunday. Today, Lynch finally heard back from the NFL about scheduling a hearing over said seven-month old fine.

During that same game Lynch was fined $20,000 for grabbing his dick as he entered the endzone. As I mentioned, like, five seconds ago, the actual fine for his silence was never revealed to the public until today. But ESPN's Adam Schefter had reported that the NFL was considering one, at the time, in excess of 50 grand: 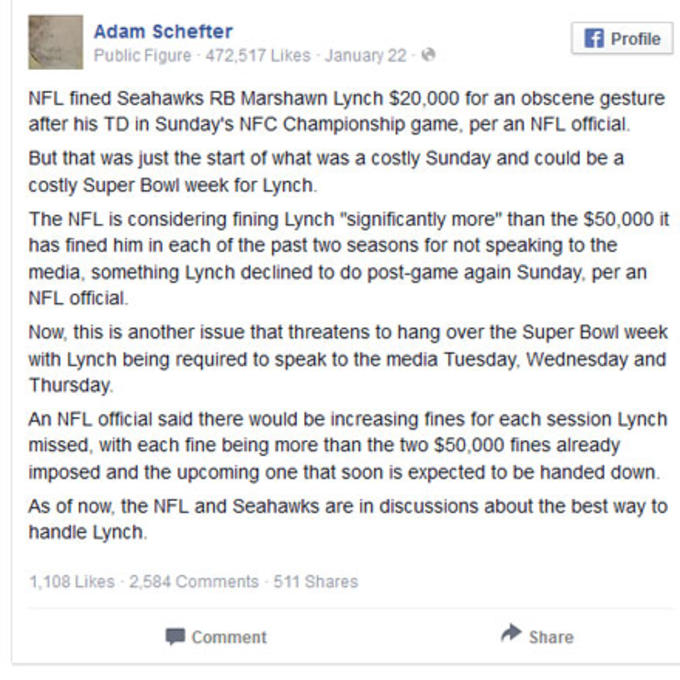 The hearing for Lynch to try to overturn this penalty is scheduled for August 27, a full *checks calendar* two days from now. Lynch learned that today.

Previously, Lynch had appealed a separate fine of $100,000 after ducking the media following a regular season game against the Kansas City Chiefs. After stating his case the NFL decided to get together and overturn their initial ruling.

No, just kidding, it was predictably upheld.