Donald Trump. Though the name alone conjures paragraphs and paragraphs of fascinating commentary on the unfortunate power of an idiot with a terrifyingly large audience, the latest plot twist in the saga of Trump requires an addendum: 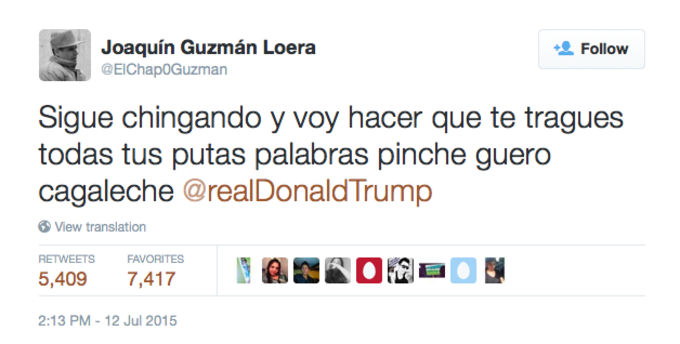 Roughly translated, this tweet — reportedly from the son of escaped drug lord Joaquin 'El Chapo' Guzman — is a profanity-laden, low-key death threat akin to "Keep fucking around and I'm gonna make you swallow your bitch words, you fucking whitey." Though Trump's initial stance on El Chapo was little more than a baffling attempt at using his much-discussed prison escape as some sort of real-life endorsement of Trump's idiotic stance on immigration, he's now taking matters much more seriously.

Following the tweet, Trump reportedly contacted the FBI in an effort to ensure his own safety from the impending wrath of the Guzman family. According to TMZ, Trump still insists he "isn't backing down," though a little FBI cosign of safety would seem to suggest otherwise. For the record, El Chapo was recently spotted hanging out in planes and even enjoying a cold beer:

Of course, most of this could have been avoided had Donald Trump never been allowed to become Donald Trump.