The Cumberbitches will be pleased.

If you've never heard of the "Cumberbitches," they're the online worshippers/fans of one Benedict Cumberbatch, the English actor best known in the States for playing Khan in Star Trek Into Darkness and for recently winning an Emmy for his work as the titular detective on BBC's Sherlock. As an actor, he's refined and debonair, exuding the balance of ruggedness, delicateness, and slight quirkiness that only Brits with names like Cumberbatch and Hiddleston can do so effortlessly; as an unlikely heartthrob, he makes the weird-looking Robert Pattinson's rise to pin-up hunk seem logical.

All of that has turned Cumberbatch into the Internet's male answer to Anna Kendrick, only rivaled by Chris Pratt.

And by year's end, even your out-of-touch mother will know his name. Come Academy Awards season, Benedict Cumberbatch will be all the rage thanks to The Imitation Game, one of this year's textbook Oscar bait movies. Its Academy makeup is so on-the-nose that it's somewhat comical. Directed by Norwegian filmmaker Morten Tyldum (whose 2011 foreign-language thriller Headhunters is a must-watch), The Imitation Game is a biopic (One Oscar Point) set in World War II (Two Oscar Points) about an eccentric and closeted gay mathematician (Three Oscar Points) that's backed by the almighty Harvey Weinstein (All the Oscar Points). It's 2014's The King's Speech, basically. Even if Cumberbatch's film weren't actually any good, it'd still be a lock for some nominations. Again, think The King's Speech.

The Imitation Game is, thankfully, unquestionably better than The King's Speech. The real-life character Cumberbatch plays is Alan Turing, a Cambridge University whiz whom the English government recruited during WWII to break the German Navy's impossibly cryptic code system known as Enigma. Heading a small team of other brainiacs, notably including the brilliant and warm-hearted Joan Clark (Keira Knightley), Turing endured through accusations of being a Soviet spy, mistrust from the government officials funding his research, combative colleagues, and his own personal demons to eventually crack the Nazis' code and help England defeat Germany. It's a remarkable story that was kept under wraps for nearly 50 years. 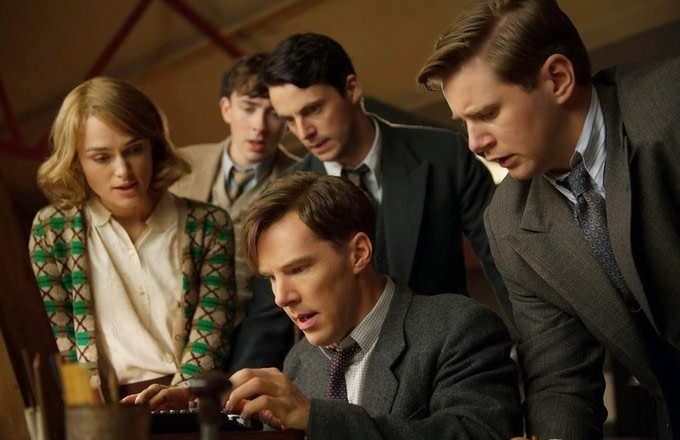 When The Imitation Game is focused on Turing's top-secret work, it's fast-paced and brings to mind a stuffier version of The Social Network. While everyone except for Joan doubts his methods, Turing singlehandedly builds a massive computer, and like Jesse Eisenberg's portrayal of Facebook creator Mark Zuckberg, Cumberbatch emphasizes Turing's personality defects and how his peers negatively respond to them. He's a humorless savant, speaking without a filter and needlessly complicating conversations with his uptight literalness. His terrible grasp of casual slang and figures-of-speech makes him a less fun Drax the Destroyer. Early into the film, one of Turing's cohorts says to him, "We're all going to lunch," which causes an unexpectedly long back-and-forth until Turing finally understands the cohort's point, which happens once he rephrases his statement as, "Would you like to go lunch?" The Imitation Game is full of misconstrued exchanges of that kind, many of which are quite funny.

If not obvious. Too often, The Imitation Game veers dangerously close to paint-by-the-numbers period storytelling. Those bits of levity vary from undeniably humorous to telegraphed, many coming at the expense of cliched side characters such as the "arrogant colleague" (Matthew Goode) and the "take-no-bullshit superior" (Charles Dance). As a historical exhibition of code-cracking and underdog victory, the film nearly sinks under the weight of its gimme-all-the-awards intentions.

Yet there's something more interesting going on in The Imitation Game than simple formulas. Its Social Network ripoff veneer is gradually exposed as accessible window-dressing for an emotional character study about repressing one's homosexuality. Flashbacks to Turing in grade-school show how he first discovered his same-sex attractions, and as the film moves forward, you see that his inability to openly express himself in the intolerant 1950s English society is what causes him to be so tightly wired and anti-social. More than just a tacked-on love interest, Keira Knightley's Joan is instrumental in forcing Turing to confront his true self.

Once Tyldum fully embraces The Imitation Game's in-the-closet subplot as its driving force, Cumberbatch really breaks free, no Ariana. That's when you'll start letting the waterworks out. At yesterday's TIFF screening, two grown men, seated on both sides of me, audibly cried like your little sister watching The Fault in Our Stars during one of The Imitation Game's closing scenes. They lost it during a teary-eyed breakdown for Turing in which Cumberbatch shows why all of The Imitation Game's early Oscar buzz is, for once, not just gun-jumping hyperbole. It's the scene they'll use—if the nod does happen—after his name gets announced in the Academy Awards broadcast. Years from now, it's what we'll all look back on as the moment when we all became Cumberbitches.