Those beloved Marvel graphics show up on the screen, but there aren’t any Avengers. There’s just Parks and Recreation’s Chris Pratt, still slightly in Andy Dwyer mode while talking sassily to a bunch of intergalactic baddies. Moments later, there’s Zoe Saldana covered head to toe in green makeup, and, shortly after that, a talking raccoon voiced by Bradley Cooper, sounding like he’s a Goodfellas extra, and a Dikembe-Mutombo-tall tree that’s apparently moving via Vin Diesel and motion-capture effects. Eventually things get even weirder when WWE behemoth Dave Bautista joins the group, slathered with garish body paint that makes Zoe Saldana's seem subtle.

Wait, isn’t this supposed to be a Marvel movie?

Well, it is and it isn’t. Guardians of the Galaxy (in theaters today) is, technically, based on an obscure, hardcore-fan-only Marvel comic book, one that exists outside the worlds of Iron Man, Thor, and Captain America. But that’s where the superficial connections to the superhero company ends with director James Gunn’s peculiar, often hilarious space-bound adventure film. A graduate of the Troma world (i.e., the world of low-budget genre oddities like The Toxic Avenger and Tromeo & Juliet), Gunn has triumphantly merged his own left-field sensibilities with the demands of a Marvel summer blockbuster. Guardians of the Galaxy has visual grandeur, loads of action, and momentary allusions to the brand’s larger cinematic universe, but it’s also tonally unlike anything Marvel’s done before. The quirky jokes remain steady and on-point, right down to tongue-in-cheek moments like when the usually classy co-star Glenn Close yells out “Pricks!”

Once you’ve seen Guardians, you’ll want a Rocket Raccoon action figure. You’ll find yourself sobbing because of a CGI tree’s sequoia-sized heart. And, most importantly, you’ll have had so much damn fun at the movies. 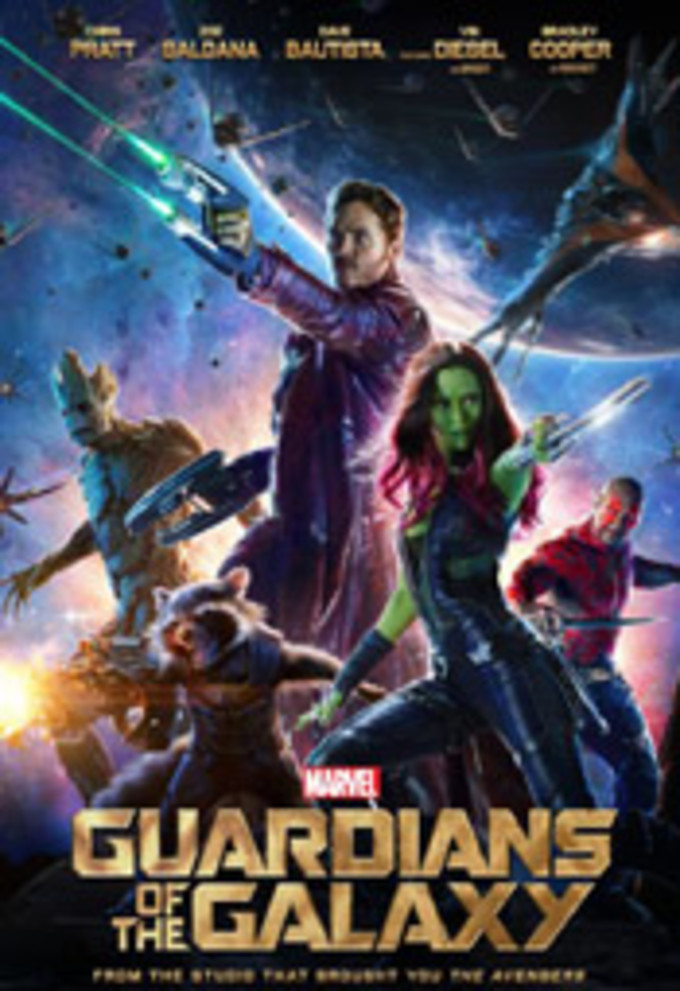 Matt Barone: The whole time while watching Guardians, I kept thinking, wow, this feels nothing like those other Marvel movies. That's a huge compliment. Not that I don't like The Avengers and some of the other solo-hero flicks, but they all feel similar, even when the settings and approaches change; just because Captain America: The First Avenger is a period piece, for instance, it doesn't feel much different tonally than Thor. Guardians, though, is a pure James Gunn movie. The oddball sense of humor. The constant irreverence and subversiveness. The spot-on but unexpected casting choices. The great music choices. Because of all that, it's, in my mind, the hands-down best Marvel movie yet.

Tara Aquino: I definitely agree. There’s a certain lightness and playfulness in Guardians that makes every other Marvel movie feel homogenized. I’m glad they cast according to who would fit the tone.

Matt: It's right there from the opening credits sequence, where Chris Pratt's lip-syncing and dancing to Redbone’s “Come and Get Your Love" on his '80s Walkman, on a drab-looking space planet like he's Marvel's answer to Fred Astaire.

Tara: Speaking of Chris Pratt, there was just something about him and his chemistry with Zoe Saldana that none of the sincere moments felt too melodramatic. I mean, comedic relief was also written into the scenes, but none of it felt forced. If anything, the “romantic” scenes were self-aware and kinda winking at those typical movie clichés.

Matt: Exactly. You can tell that he and Saldana are having a great time; they love the characters as much as James Gunn clearly does. They're able to make some clever comedy writing seem natural. There's the running joke throughout the film where none of the other Guardians understand Peter Quill's metaphors and figures-of-speech. He says, "People with sticks up their butts," and Gamora replies, "Who put the sticks up their butts?" It's silly but also funny and right for their characters.

Tara: [Laughs.] Man, that scene was incredible. And the humor is universal, too. I can even see kids responding to Drax, who, by the way, is the greatest straight man for any comedian to play off of. He’s like a dad. This big hulking character has the charm of your dad. Which brings me to another great thing about this—every character felt accessible and relatable in some way, despite being odd-looking space aliens. I mean, a freaking tree made me cry—Groot, a tree…who says nothing.

Matt: Except "I. Am. Groot." Props to Vin Diesel for making that same three-word phrase have varying emotional weight whenever he said it.

Matt: I couldn't even recognize Cooper's voice most of the time. I love how he turned a potentially bizarre and problematic talking raccoon into Marvel's very own Joe Pesci. 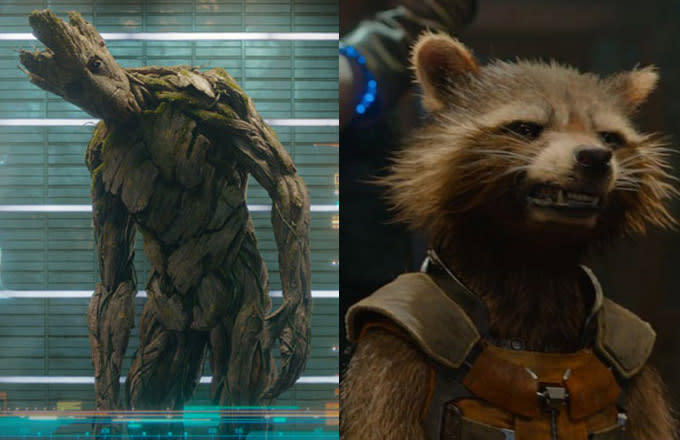 About the accessibility you mentioned earlier… The storytelling device of Quill's "Awesome Mix '88" cassette tape does a lot for that. Everyone knows songs like Marvin Gaye's "Ain't No Mountain High Enough," so hearing those records in this completely heightened space universe grounds everything. The talking raccoon and talking tree, therefore, don't seem so unrelatable. The music is also used in really unexpectedly poignant ways, namely near the end, when The Five Stairsteps' "O-o-h, Child" softly plays after a devastating spaceship crash. There's a haunting bit of melancholy and sadness to that bird's-eye-view shot of them all laid out in the wreckage as that song plays. Or maybe I'm just getting too soft in my 30s and read too deeply into that moment.

With all this praise of the characters and tone, though, I feel the need to point out how, even though the characters and tone are different from other Marvel movies, Guardians left me with the same feeling as past Marvel pics: I just want the characters to be themselves, interact, talk, quip, and exist, without any blockbuster-movie interruptions; the space world looks great, but whenever the big action set-pieces happened, I wasn't as impressed.

Tara: Right, the climax is meh, to be honest. There’s obviously nothing new or groundbreaking or mind-blowing about that whole final sequence. However, I do appreciate the measures the movie takes to prevent Avengers-like destruction. It made it a point to say they evacuated the city in time, the soldiers helped out—everyone chipped in and continued to verbally reinforce that they’re trying to prevent as many casualties as possible.

Matt: Good point. In that respect, it's the anti-Man of Steel, which, though it's DC and not Marvel, set the new record for highest amount of brushed-off collateral damage in a superhero movie; it'd be "any movie ever" if not for what Transformers: Dark of the Moon did to poor Chicago.

Did the villain, Ronan, resonate with you at all? To me, he's a slightly interesting riff on Darth Vader who mostly takes away screen time from the character I’d much rather be watching. He's the latest Marvel movie bad guy who barely registers alongside the infinitely more interesting heroes/good guys. The only Marvel villain to buck that trend has been Loki in The Avengers, due in large part to how Tom Hiddleston kills it and seems like he's having the time of his life throughout that entire movie.

Tara: I honestly was not even concerned with the villain at all. He didn’t feel too threatening. At no point did it feel like he’d win this one. I felt like I was looking at the clock waiting for his scenes to be over so we could get back to the Guardians. Which brings me to the problem with him: out of all these three-dimensional characters, he’s completely flat. His motivations are basically nonexistent.

Matt: Yeah, it's just the same old "I want to be almighty and rule the universe" motive. There's a bit of resentment towards Thanos, but, you're right, he's a distraction, not a worthwhile threat. He's there largely for world-building purposes within the Marvel universe, with his Thanos drama somehow connecting to what I'd imagine we'll see in Avengers: Age of Ultron. Why can't Marvel movies have memorable villains? It's the direct inverse of DC's movies... Well, the recent Batman movies, specifically, where the villains dominate over Batman. If Marvel could somehow deliver a Bane- or Joker-like villain in one of these movies, the results could be amazing.

Tara: Maybe the less complicated the villains are, the less difficult they are to fit into this ginormous Marvel puzzle. Still, Marvel’s winning with the formula they’ve got, at least in film (requisite Arrow shout-out here!). And I’m not feeling the Marvel fatigue at all. I wouldn’t say this has made me more excited to see Age of Ultron, but I’ll certainly be there opening week. 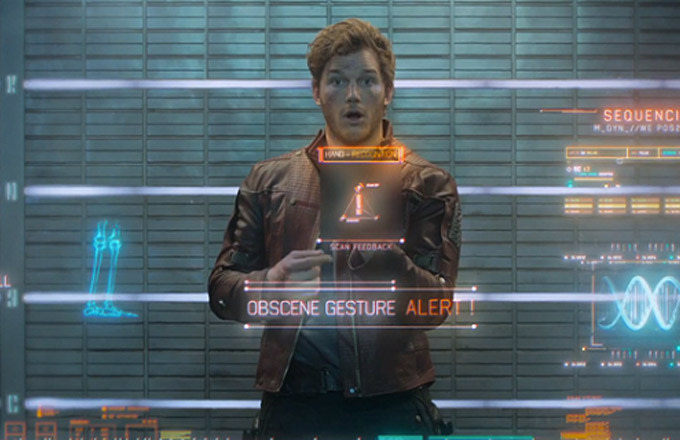 Matt: If anything, Guardians has me excited about Marvel's movies again. Now I can't wait to see what Scott Derrickson will do with Doctor Strange; Marvel's clearly not afraid to let directors run wild with the company's weirder properties. Hopefully the overwhelmingly positive reviews for Guardians and, fingers crossed, good box office business this weekend, will make them want to do more left-field curveballs like Guardians in the future.

Matt: Ugh, that's another thing: If they let James Gunn do his oddball thing here, why the hell couldn't they let Edgar Wright live, be great, and give us all the Wright-y Ant-Man we've all been waiting for and deserve? If I'm Edgar Wright watching Guardians, I'm saying to myself, "Those fucking blokes!”

Tara: Edgar Wright, if you’re reading this, please let us know what you think of Guardians.