Though we beautifully learned earlier this week exactly how Drake's life as a regular college student might look, that clever reimagining failed to account for reality. Drake dropped by Howard University on Saturday, reportedly sliding into the campus bookstore to pick up some Howard gear, and any hopes of blending in or emulating those Photoshopped "Drake the campus boy" shots were quickly destroyed:

Why, yes, that is a pack of eager Drake fans on the hunt for the 6 God. As history has already confirmed, Drake and Howard University are a more-than-winning combination. In 2012, Drake showed up at the university's homecoming event and absolutely slayed the stage with 2 Chainz. That fact has many students speculating that Drake is simply on campus this weekend to prepare for next week's homecoming festivities, a highly tweetable brag currently making waves: 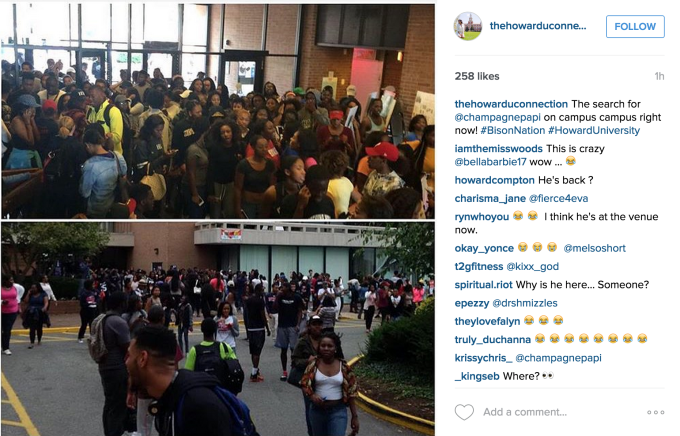 Conspiracy theory: Drake and Future show up next week to perform What a Time to Be Alive front-to-back to swiftly deliver the greatest collegiate homecoming experience of all time.