The first Republican Primary debate is set to air in August, pitting the growing number of GOP candidates against each for the nation (or Fox News viewers) to see for the first time. We can expect more candidates from all parties to announce their candidacy in the meantime, but it's unlikely any will grab our attention quite like Princess Khadijah M. Jacob-Fambro.

You've likely never heard her name, but the San Francisco woman filed a candidacy form with the Federal Election Committee seemingly for the sole purpose of proposing to Lil Wayne. In the section where she's supposed to name her committee, she proposed to Weezy and claimed, "I am God." And she's running with the Revolutionary Party, in case you were wondering. 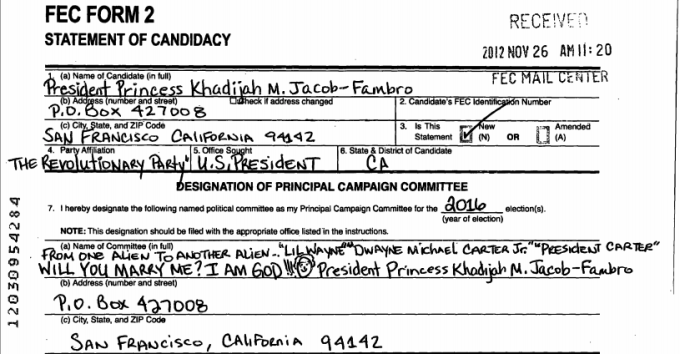 The form was filed shortly after the 2012 presidential election, but it's come to light in a New York Times article on the 366 candidates who have filed so far. It would have been tragic had the form gone unnoticed, leaving Lil Wayne unaware of his marriage options and us without a clear choice for our next president. Put it on an extra long bumper sticker: "Princess Khadijah M. Jacob-Fambro 2016."

Listen to Turk’s “You Mad Yet (Remix)” f/ Lil Wayne