Dwyane Wade has been trending downwards in recent seasons. Chronic knee injuries forced him to accept a second banana role to LeBron James in South Beach. Even when healthy, Wade, now creeping up into his mid-30s, hasn't looked like a title-worthy second option. LeBron's decision last summer to leave Miami can be interpreted as a condemnation​ of Wade's abilities and/or his ability to play on a consistent basis, however, this season things have been different. Wade's once again the No. 1 guy in Miami, and from what we've seen so far appears to have entered a late-career renaissance​.

Dwyane Wade, at the start of the 2014-15 regular season, was definitely washed. The last we had seen of him was his spin cycle of a Finals performance. Averaging 15.2 PPG on 43.8 percent shooting was a complete brick of a line from the former Finals MVP. In the tumultuous summer months that followed, BFF LeBron skipped town in part due to the 33-year-old shooting guard’s decay.

No longer viewed as a reliable Robin, LeBron decided to move home and take his chances with Kyrie Irving and Kevin Love, the winners of zero total playoff games. The bumps came relentlessly throughout the summer and fall. His newly-wed wife had her nudes leak a month after the Love trade. Li-Ning, his sneaker sponsor, pumped out more terrible signature Wade’s.

The NBA-watching, black culture-consuming internet had Wade pinned and folded. I dare say, Wade was looking like the NBA’s Jayceon Taylor—a 2000s legend whose mojo had been over-resourced.

Things are different now. Dwyane Wade, at the start of 2015, is far from washed. The Heat may be sitting at 18-22, but in the forest fire that is the Eastern Conference, they’re still in contention. That’s more than half the conference can say, and they’re only two games back of the Cavs in the loss column, so that's a double bird to LeBron, who’s quietly sat out the same amount of games as Wade this year.

Wade is putting up his highest points, assists, and shot attempt averages since 2011, and doing so while playing more frequently than he did in 2014.

As we’ve come to discover this season, Wade was never truly washed—he just needed a chance to be counted on again. Quite simply, Dwyane Wade is stepping the fuck up. Coach Erik Spoelstra asked the Don of Miami to return from his LeBron-induced exile, and Old Man Wade has obliged. Now a 12-year vet, he’s been asked to take on a player-coach role.

“[They’ve] given me the go ahead to be another coach, stop practice when I feel the need to, step up and say certain things,” he told the Miami Herald in December.

Replacing LeBron’s brain and leadership is one thing. Wade’s still one of the best living all-around two-guards since Jordan, which gives him an unmatched ethos in Miami. It’s his play that hasn’t lined up with that status in recent years, particularly late in the season. An elder Wade has been more concerned with physical maintenance over production, leaving LeBron to play what seemed like every damn minute.

The Heat can’t afford to treat Wade’s body like an aging Spur anymore, because the Heat would suck without his current production. Wade is putting up his highest points, assists, and shot attempt averages since 2011, and doing so while playing more frequently than he did in 2014. Last year, the second game of a back-to-back automatically meant a suit-and-tie bench role for Wade. This year, he’s not pulling that shit anymore, and he’s looking stronger for it. In the seven games he’s played on the back-end of a back-to-back, Wade’s averaged 23.0 PPG on 51.8 percent shooting.

He owned December, putting together performances that resembled something out of 2008. Netting 42 against the Jazz was light-work, and cackling off 24 first half points in LeBron’s Christmas Day return to South Beach seemed effortless. To this point, December Wade averaged 22.1 PPG and 5.6 APG on 50.0 percent shooting, only failing to break 20 points three times out of the 20 games he played.

Those knees aren't looking too bulky either.

Guaranteed Wade put this picture in the group chat with Riley, Coach Spo, and LeBron. 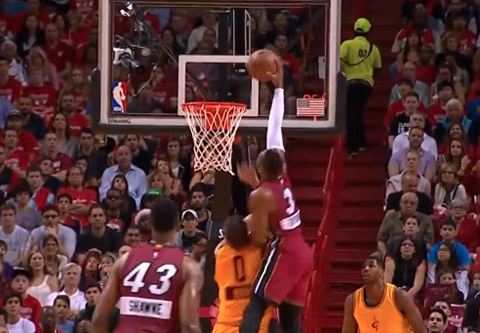 Old Man Wade is moving like his legs spent a summer in Germany. That’s good, but the Heat are relying on his playmaking ability more than ever. Wade’s assist percentage currently stands at 38, a full six points above his career average, and his highest mark since 2009. His usage percentage is also the highest its been since the last time Miami was a one-man act. With Norris Cole and Mario Chalmers struggling to be real point guards post-LeBron, Wade’s taken over the facilitating duties to impressive effect.

He’s too good to fade to crap so quickly, even if his body is cracking joint-by-joint, year-to-year. There’s a strong possibility that this time next year, Wade will be for real washed. Now is not that time though. He’s enjoying the role as The Man again in Miami, kind of like Sosa at the end of Scarface. For once, I actually believe that Gatorade commercial where Wade acts like he gives a damn about competitive basketball. Waking up at night, sweating. Next to this woman, his wife: 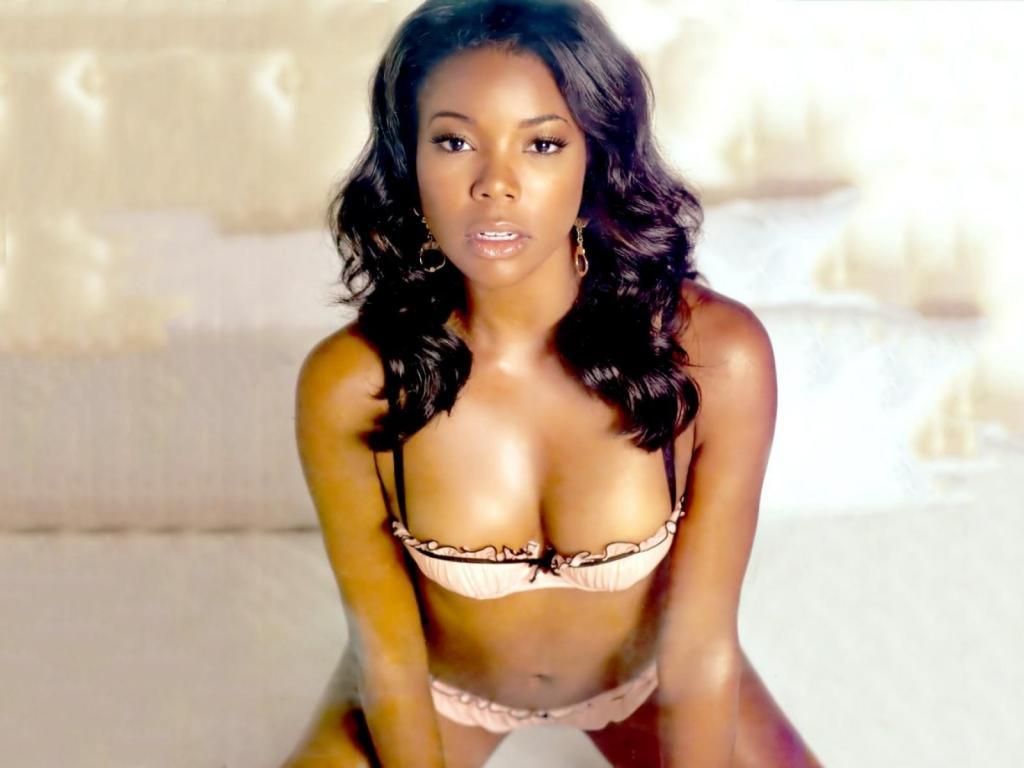 What exactly about Dwyane Wade is washed, again?

First off: this is not an attempt to say that Dwyane Wade is now a bad basketball player. He’s still good, even occasionally capable of being great.

However, the broken down 33-year-old is far from the same player of even two or three years ago, and there’s no reason to think that his decline is going to slow down. If anything, the departure of LeBron James has forced Wade to carry an even heavier load on both ends of the floor, a responsibility a guy with chronically bad knees can ill-afford to have. Wade currently sits at third in the NBA in usage rate at 34.4 percent, trailing only Russell Westbrook and Kobe Bryant.

As hard as he has played throughout his career, Wade has never been an especially durable player. He’s never topped 80 games in a season, and has only crossed the 70 game mark five times in 10 years (excluding the lockout season and this season). In 2013-14 he appeared just 54 times during the regular season (just under 66 percent of Miami’s games), and when asked to play a more regular role during the playoffs struggled mightily to find any consistency. This year he’s played in 30 of Miami’s 39 games, and has now picked up a hamstring injury that according to coach Erik Spoelstra means “rest is on the agenda.”

While his per game numbers this year don’t reflect a decline in production, the way in which Wade has to get his points now indicates that things could go downhill quickly.

For many years, there was absolutely nobody in the NBA better than Wade at getting to the rim and either scoring or drawing a foul. Remember that “fall seven times, get up eight” commercial? Let’s refresh your memory:

I hope you enjoyed the footage, because that guy is long gone. This new version of Wade is not getting to the line nearly as efficiently; his free throw attempts per game have been on the decline every year since 2009-10, and have seen an uptick this year due to his greatly increased shooting burden in the wake of LeBron’s departure.

the way in which Wade has to get his points now indicates that things could go downhill quickly.

So if he’s not going to the hoop, where is Wade shooting the ball? According to Basketball Reference, the great majority of Wade’s attempts are coming from between 16 feet and the three point line, which both math and common sense will tell you is the most inefficient place on the floor. Over the course of his career, Wade has attempted about 37 percent of his shots between 0 and three feet, and about 26 percent from 16 feet to the three point line. That number has basically flipped this season, as Wade is now attempting 23.5 percent of shots at the rim and 31 percent from 16 feet to the three point line.

Basically, what that means is that he is now settling for crappy midrange jumpers way more often than he used to. Unfortunately for Wade, his shooting percentages from those two distances are both on the decline. His percentage both at the rim (.694) and from 16 feet to three point range (.391) have gone down the last three years, and you’re not going to dig through NBA history and find many players who got better as their 30s wore on.

Wade’s defense is as bad as it has ever been by any advanced statistical measure, and what started in last year’s NBA Finals has only gotten worse this season. He’s allowing a career-worst 111 points per 100 possessions this season, well below the league average. This kind of lackluster output is a very normal thing to happen to an aging player, especially one who has a history of injuries and is relied upon to expend much of his energy on the offensive end of the floor.

So, the current iteration of Dwyane Wade is basically an oft-injured, defensively porous volume scorer who is shooting with an increasingly declining level of efficiency. Does that make him totally washed up? No. But it also doesn’t make him an All-Star, or someone worthy of the level of acclaim he still receives.

This 33-year-old version of Wade may still be doing “big things” with LeBron next year, but he can no longer do it alone on the struggling Miami Heat.