If a Commissioner’s credibility and judgment is assassinated on Black Friday, does anybody hear it?

That’s the question everyone should be asking right now about NFL Commissioner Roger Goodell, who saw his decision to indefinitely ban Ray Rice overturned by Judge Barbara S. Jones one week ago today. To be more accurate, though, his decision wasn’t just overturned; it was deemed “arbitrary and capricious,” a legal term essentially meaning “your judgment is complete bullshit.”

Judge Jones’ opinion is, for all intents and purposes, unassailable. She was appointed Judge of the United States District Court for the Southern District of New York by President Clinton in 1995. Anybody who knows the law can tell you that this is one of the most prestigious and important districts in the entire country; it includes New York City, which houses some of the world’s largest financial institutions.

Essentially, you’re best off accepting her word as law. If Judge Jones says that Goodell was completely wrong to indefinitely suspend Rice a second time, it's probably legally true.

Naturally, the next question has to be how and why did Goodell get everything with Rice so wrong? Is he—as Bill Simmons so bluntly put it—just a good old fashioned liar? Is he just completely incompetent at his job? Did he remain willfully ignorant even though there were about 15 ways he could have gotten the infamous interior elevator tape? Does it even matter?

Regardless of his true motivation, this wholly-botched and horribly-executed disciplinary process with Ray Rice has laid bare something we really have known for a while: Roger Goodell is not fit to serve as NFL Commissioner. 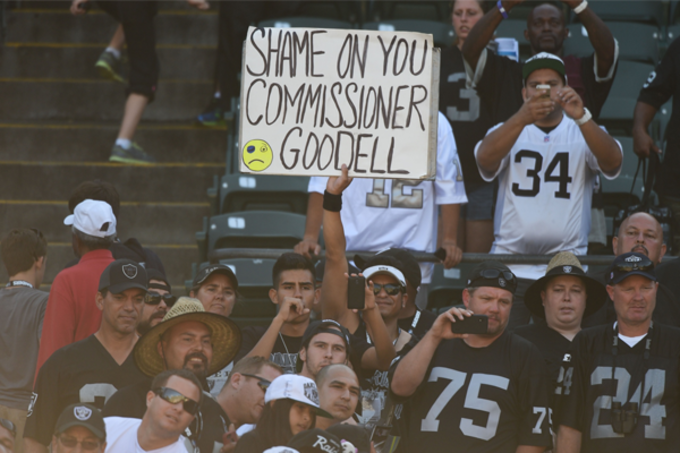 Judge Jones’ decision plainly shows the incredible failure of Goodell to competently complete a thorough and fair investigation. You don’t need to read into potentially ambiguous commentary to reach that conclusion; all you need to do is look at the facts pulled directly from the testimony Jones heard on November 5 and 6:

How could a Commissioner seeking a fair, transparent disciplinary process in such a delicate matter blunder so badly? How is he not A) Recording the meeting either via audio, video, or both, and B) Taking detailed notes about what he’s hearing? These simple steps seem like really obvious and easy ways to ensure that if there’s any question after the fact, there is a clear and impartial record as to what transpired in the meeting. It’s mind-boggling to think that Goodell is making these massive decisions based purely on some hybrid of groupthink and a precedent of domestic violence discipline that everyone has agreed for years is too light.

While there’s no evidence to suggest that Goodell was being deliberately deceitful or insidious and making shady backroom deals, wouldn’t that almost be better than the alternative? The guy is making a reported $44 million dollars per year; do we really want to support a business where executives making this much money fail to take even the simplest common-sense measures to protect their integrity? It would almost be a relief if his mishaps were revealed to all be a calculated move by a guy who had a legitimate master plan.

Goodell has spent his entire tenure projecting an image of himself as a macho reformer who will be remembered as “the guy who cleaned up football and used tough love to take care of the players.” That’s a nice idea and all, but there's a fair chance if you took a poll of current and former players you’d find that they think basically the opposite of him. Despite the contrived nature of his “press conference,” Richard Sherman sure seemed like a voice of the players when he called out Goodell for his hypocrisy at every turn.

In Goodell’s mind, he's “protecting the shield.” He isn’t the Discipline Commissioner; he’s the PR Commissioner. And who in their right mind would spend $44 million per year on a PR person whose had his disciplinary authority subverted twice by independent reviewers? In addition to Jones’ decision last week, there was also the whole matter of “Bountygate,” wherein Goodell made such a mockery of the process that former commissioner (and Goodell’s mentor) Paul Tagliabue was called in to clean up his mess. In Tagliabue's decision, which led to him vacating many of the suspensions, the former commissioner called Goodell’s judgment into question by saying “the NFL's decision to suspend a player here for participating in a program for which the League typically fines a club certainly raises significant issues regarding inconsistent treatment.”

And going back even further, don't forget that with zero explanation, Goodell had all of the “Spygate” tapes from the Patriots destroyed. He told late senator Arlen Spector that he felt “it was the right thing to do,” because, you know, who would ever want to double check those or do a more lengthy investigation?

In what other profession would this be acceptable?​

This isn’t even touching the comical “player safety” initiative, which levels huge fines at players for helmet-to-helmet hits, yet also forces them to play three games in 10 days and encourages them to embrace an 18-game regular season schedule.

It should be clear by now that Goodell’s failures as a commissioner are not just isolated events. How many times does the guy have to say he needs to “do better” before we start holding him accountable? In what other profession would this be acceptable?

Ultimately, it’s up to Goodell’s 32 bosses (the owners) to make something happen, and chances are they won’t. He’s making them far too much money for that to happen. For them, Goodell is a $44 million-per-year punching bag who absorbs public scorn and shaming, suffering for their sins so that they don’t have to. He is their scapegoat in a suit. Nobody doubts Goodell's ability to take a beating and act unaffected.

Like most businesses, money is at the heart of the decisions the NFL makes. If Goodell had any sense of professional pride, he’d step down immediately; it's hard to imagine someone doing such a disservice to the game and still feeling good about his legacy. But if you think that’s enough to get him out, you’ve grossly misinterpreted what “protecting the shield” really means.

Last season, NFL teams made a total of $6 billion in revenue. That’s billion, with a B. Divided by 32, that’s a $187.7 million check the league is cutting to each team. Don’t forget that those are only national revenue dollars; local revenue often exceeds $100 million as well. These numbers will grow, too, as next year the NFL and DirecTV’s new $1.4 billion per year TV deal will kick in. The owners aren’t going to fire a guy who is making them all those millions of dollars. And as for all that public pressure that was supposed to be a factor? Gone. Recent numbers suggest that the ratings are basically right where they were last year.

Goodell isn’t going anywhere. There’s no reason for him to get fired, the public doesn’t demand it, and the man himself is so deluded that he would never willingly quit. He may not be the Commissioner we want, but given how quickly we've moved onto other topics, he’s probably the Commissioner we deserve.