[Ed. note: Many spoilers below.]

Safe to say Knock Knock is a steaming pile of HOT GARBAGE?

Brian Formo: Yes, but let's compliment the garbage a little. Even though there's definitely some rubbish in Knock Knock, this isn't garbage stuffed full of empty take-out containers and junk mail; there's some nutritional value in this garbage. But yeah, it's hot garbage, because it's a black bag that's rotting in the sun, full of compost: rotten veggies and dirt. Lots of dirt. In fact, my favorite howl-out-loud scene involves Keanu Reeves, covered to his neck in dirt, being forced to confront some major social media shame. And he howls, oh how he howls. 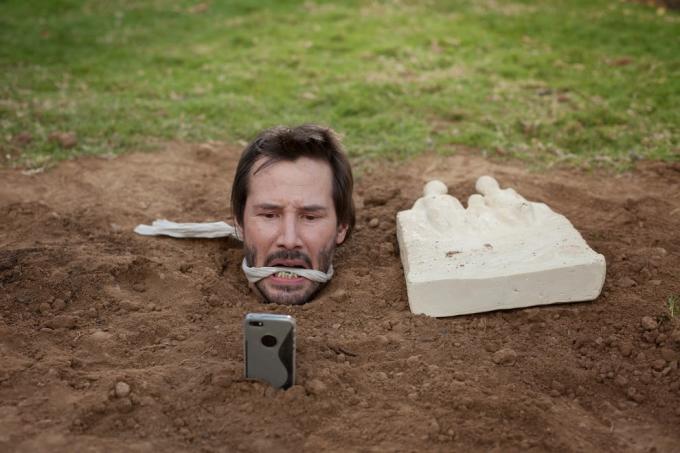 How'd Reeves end up in the dirt? The setup is simple. A cool dad, Evan, is home alone for a weekend while his wife and kids take a vacation. He stayed behind to work, he's on a deadline, and Evan works best on deadlines. On a rainy night two young women arrive sopping wet on his doorstep, "lost" and without phones. Nice Guy Evan invites them in and offers his cell phone, and although he attempts to resist their compliments he also fishes for them, bringing up his previous cool life as a DJ. He offers to dry their clothes, gives them bathrobes, and generally cherishes being told how nice he is by two young hotties. They tell him their fantasy of a threesome while they giggle and soak in bubbles in his bedroom shower—he deliberates, deliberates, deliberates, and then cancels the Uber that's in his driveway in favor of a fateful night of frenzied fucking. The two girls then make his life a living hell (but more on that later).

Nice Guy Evan Remix alert: the evening all starts when Evan invites them in by offering them a tissue for their cute little dribbly sniffles. I know we need to talk about that gesture, Kristen! But first, let's let the readers get up to speed on the (possible) auteur significance of said Kleenex.

Kristen: Oh my god. You just reminded me of his PAST DJ LIFE. Keanu Reeves acts all innocent like, "Hey, I'm just trying to be faithful to my wife" but he should know better! Showing girls his DJ skills is OBVIOUSLY seduction 101. I swear he knew exactly what he was doing. Also I love when he's like, "Oh yeah I toured the Tri-State area once." MR. BIG SHOT ALERT.

Brian: So much to unpack here! The pizza is the tastiest, of course. But before we get ahead of ourselves, the tissues. I think this is Roth's way of acknowledging his belief that all men are trash, that all men eventually would say yes to that threesome—if they felt like it would indeed be a sealed secret—and that yeah, he (Roth) was caught having webcam sex with an internet forum. I don't agree, but that's Roth's thesis. Remember Bel and Genesis say that no one has turned down this evil twosome yet, and Evan gave the most resistance.

So FREE PIZZA! First of all, I have to correct you, Kristen. It wasn't the dual blowjob that was the "free pizza" in a monologue for the ages. No, it was them arriving on his doorstep asking to come in. What do you do with free pizza? You don't turn it away. Maybe you're skeptical of it a little bit, like, who sent this pizza? What's wrong with it? Why would someone just give me free pizza? But then eventually you eat it. You just do. That's what happens with free pizza. However, here's the problem with free pizza: you don't get to choose your own toppings. The only thing that's actually appealing about free pizza is the unexpectedness of its arrival. Most likely, it's not what you actually wanted from pizza, though. Standards drop at the free price.

But that monologue! If "FREE PIZZA!!!" and later Keanu's buried in the dirt howl aren't the most used movie GIFs from 2015, the movie corner of internet will have let us all down. This is Nicolas Cage's "not the bees!" if The Wicker Man was aware that it was a hot mess. I am not bullshitting anyone reading this when I say that this is Keanu Reeves' most volcanic performance. He brought his Screen Actors Guild card to this movie. He is truly in awe of his niceness and fond of his previous life of DJing in three states. Three! And he is truly terrified of what these women might end up doing to him after the fact. (He also really doesn't want to lose his hearing, which I also believe.) All I'm saying is that Knock Knock might feature the least Keanu performance from Keanu as we've come to know and love him. His speech is not slow, composed, and zen. He is unhinged in Knock Knock and I really liked it. Shouting Keanu! Pleading for his life Keanu! I hope this is a new chapter in his career!

So, care to unpack the methodology of Bel and Gensis' performance art and how that brought out the fierce Al Pacino that we didn't know Keanu had in him? Evan's house is trashed, his exploits are recorded, and his wife's artwork is defaced. Yep, that's a baton pass to you for Roth's possible creed that we place too much value on art!

Kristen: If I'm not mistaken, the actual quote was "YOU WERE BOTH SUCKING MY DICK! IT WAS FREE PIZZA!" But yes I see your interpretation of the FREE PIZZA. It was their arrival, soaking in the rain, t-shirts see-through and clinging to their bodies. Giggly, helpless, doting. Stranded, willing. A man's fantasy? The entire situation was free pizza. Man, that monologue haunts me. Truly a monologue for the ages. I will have to watch this movie again just for that monologue.

He makes a good point, though: Who would turn down free pizza? I certainly wouldn't.

Most people will let this go under the radar, but I think you're right—this is Keanu Reeves' Al Pacino moment. Own it, baby! I've always found Keanu's acting a little bit bland but he really gives it his all in Knock Knock. That final howl, OH MAN. I think even the girls were surprised at how much Keanu had in him.

Rather than psychopaths, I like to think of Bel and Genesis as performance artists. How staged that whole thing was! They even did costume changes. They filmed the sex scenes and ROLE PLAYED. It was Shakespearean, to a degree. They defaced Keanu's wife's very expensive art! They papier-mâchéd the hell out of that, man! These women are artistes. And then to trash his house and graffiti "ART DOES NOT EXIST?" There are levels to this artistry, Brian, just like Eli Roth's movies. LEVELS. Going back to the Pauline Kael quote: I think this is Eli Roth's case for the American public (and critics, mostly) to embrace Great Trash. At the end of the day, is that not art?

Kristen: CHEATING EVANTUALLY GETS YOU KILLED.