What would you die for?

That's the booming question that comes to mind during Meru, a new documentary that follows three mountain climbers in their high-stakes pursuit of making it over the Shark's Fin (on Meru Mountain), a never-before-accomplished Himalayan peak standing over 20,000-feet tall. For serious climbers, it's the golden prize, the ultimate white whale. For some, it's even worth risking your life for.

All three climbers—newcomer prodigy Renan Ozturk, along with veterans Conrad Anker and Jimmy Chin (who co-directed the film with his wife Elizabeth Chai Vasarhelyi)—risk their lives, and are already familiar with a narrow escape of death. Conrad had lost his previous climbing partner, Alex Lowe, to an avalanche in 1999, while Jimmy got caught in one himself years ago, and miraculously made it out alive.

But the film focuses on their attempts on Meru, first in 2008—to a disappointing fail—and then again in 2011. For Renan, the risks are even higher on the second climb, as he prepares for it following a skull-cracking injury that lands him in the ER. He goes in knowing full well that the altitude and physical stress may bring on a stroke. To him, the chance of victory far outweighs the possibility of death—his daredevil antics bordering on mental insanity.

The 25 Greatest Sports Documentaries of All Time

There are few people in this world so passionate about their craft, and it's that shared passion among the three climbers that perhaps blinds the other two when making the judgment call on whether or not to bring Ozturk along. The ethics of that decision are blurry, but Renan is a man who's impossible to talk off a ledge. In a Q&A screening at MoMA earlier this month, Renan said that he had cried over his computer keyboard while watching early cuts of the film.

The climb is a real-life Mission: Impossible—no one had ever accomplished it before at the time, and there's no guarantee that these guys would be able to either. "We pursue uncertainty because that's the most exciting," Chin said during the Q&A. It's exciting for the viewer as well, and we feel all facets of their emotions—peaks, valleys, everything in between.

Mixing wide landscape shots with vérité footage (the climbers filmed each other on the mountain before the documentary was in development), the doc shows the stakes of the sport in both intimate and impressive scales. Some of the wide shots are breathtaking, the snow so pure and the stars so bright, they almost look like paintings. 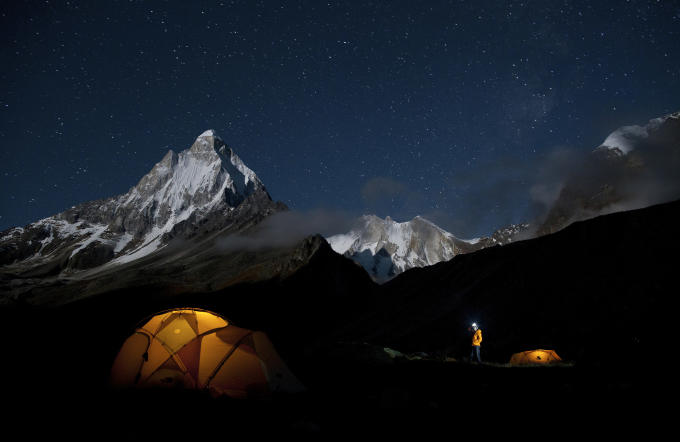 Then there's the exciting, taxing, vicarious movie-going experience of the way it was shot: It's likely you'll never make it up to Meru in your lifetime, but here's the closest look at the thrill, beauty, and, mostly, the challenge. Watching the three eat the same frozen food for days on end, huddling under sleeping bags, facing unexpected snowfalls and mountain conditions, and then the physical consequences afterwards (a shocking sight of frostbite and trench foot), Meru gives the unglamorous, behind-the-scenes look of the climb that's not shown on National Geographic covers, with climbers victoriously pumping their fist up in the air.

After their unsuccessful first climb in 2008, watching them fail is actually heart-wrenching. Was it worth it? Is it worth trying again? As an audience member, you feel a fraction of the anxiety their wives, girlfriends, and friends feel waiting at home. The blood pressure rises even more on their 2011 attempt, after Renan's injury and the realization that this is a documentary, not a fictional movie—these people may die. Jimmy's mother—before she passed—had begged her son not to die before her. Conrad's wife had made him promise that he wouldn't go on such risky climbs, and there's a backstory to this: His wife was previously married to Conrad's former climbing partner, Alex Lowe, until his death on the slopes. Renan's flirt with death leaves everyone at home—and in the audience—with bated breath. 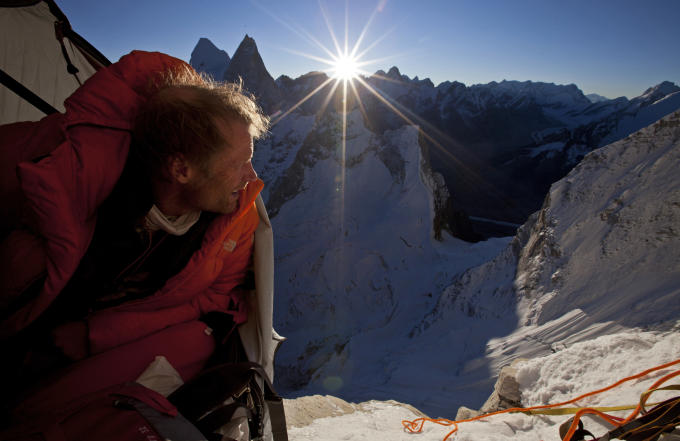 Meru, which won the Sundance Audience Award, is more than just a picture of human agility or athleticism. The film is satisfying in its clear goal and pursuit—met with impossibly high stakes—and the cinematic beauty of the scenic shots. But what takes the "man versus nature" doc to the next level is its depiction of man versus himself. We see this best in Renan's post-injury preparation. His physical workouts are doubly grueling, but the emotional and mental forces both push him forward while holding him back. Even if you aren't a fan of extreme sports, the humanity of the film is relatable on ground level.

There's an irresistible thrill in watching the documentary: How far can one go without breaking? How risky is too risky? Will they accomplish their goal, and at what price?