According to data gathered by The Wall Street Journal through public-records requests, the costs of resolving police-misconduct cases has surged for big U.S. cities in recent years.

The WSJ reports that the 10 cities with the largest police departments paid out $248.7 million last year in settlements and court judgments in police-misconduct cases, up 48% from $168.3 million in 2010. Those cities collectively paid out $1.02 billion over those five years in such cases, which include alleged beatings, shootings and wrongful imprisonment. 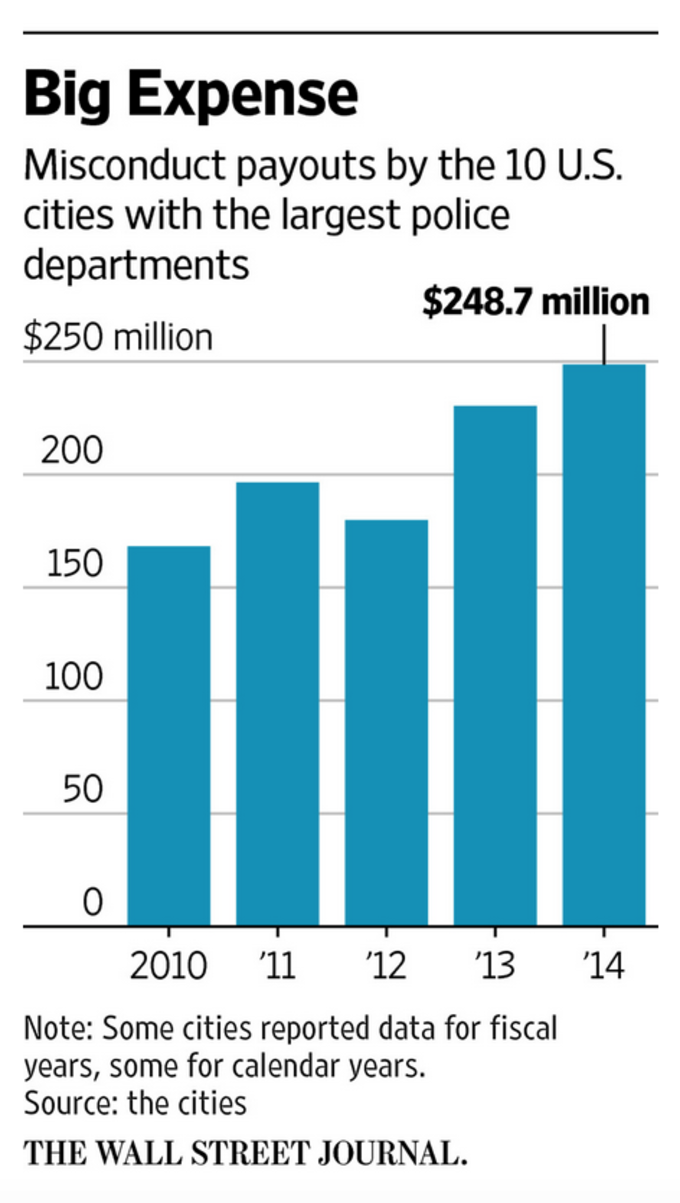 These large payouts are not only from recent cases, such as Eric Garner's whose death after being put in an illegal police chokehold recently cost New York City a $5.9 million settlement— but from resolving decades of old police scandals as well. For example, in 2013 and 2014— Chicago paid over $60 million in cases where people were wrongfully imprisoned decades ago because of alleged police misconduct.

The 'video effect' is very prevalent in the settlement of most of these cases.

In April, the San Bernardino County in California reached a $650,000 settlement when a news helicopter captured video of a sheriff beating up Francis Pusok. “They wanted this to go away fast,” says Sharon Brunner, a lawyer for Mr. Pusok. A spokesman for the county said the quick payout was made to avoid costly litigation.

There are multiple cases like this and the costs of police misconduct settlements keep rising. Cities like Alburquerque, NM lack to put more money into risk-management funds because it takes away money from somewhere else. A city councilor claims that “having to put more money into that fund to pay for the lawsuits has really been challenging.”

But does that really justify anything? With all of the lives lost due to the recent surges of police brutality in the states— what will it take to turn a new leaf and move forward with preventing future cases? We need the change now more than ever.