Eminem is a comic book nerd. When he was on The Jonathon Ross Show in 2009 he said that when he was in rehab, he used superhero comics to fill the void that kicking pills and booze left him with. And then they went back to Ross’ house and chilled and read Marvel books. Yes, really.

But Em’s ultimate geek moment came when Marvel Comics published Eminem/ Punisher #1, which teamed Slim Shady up with the superhero vigilante. Yes, this was a really comic published by Marvel. It came out in 2009 just as Em came back from his five year hiatus, and was about to drop Relapse. And it is mad AF.

It starts with Eminem doing a show in Detroit 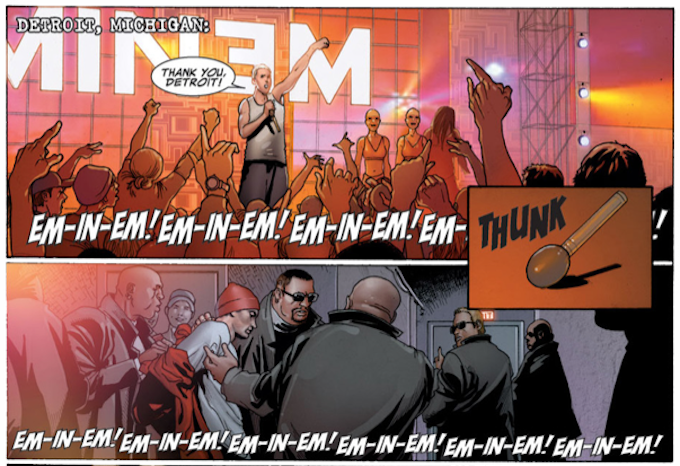 Then Punisher turns up, and basically mows down all of Em’s entourage. If you’re not a comics dweeb, or if you haven’t seen any of his three failed movies, The Punisher’s whole deal is that he straight kills criminals, stetting him apart Batman and Spider-Man’s non-murder policies. He’s kind of a dick like that. 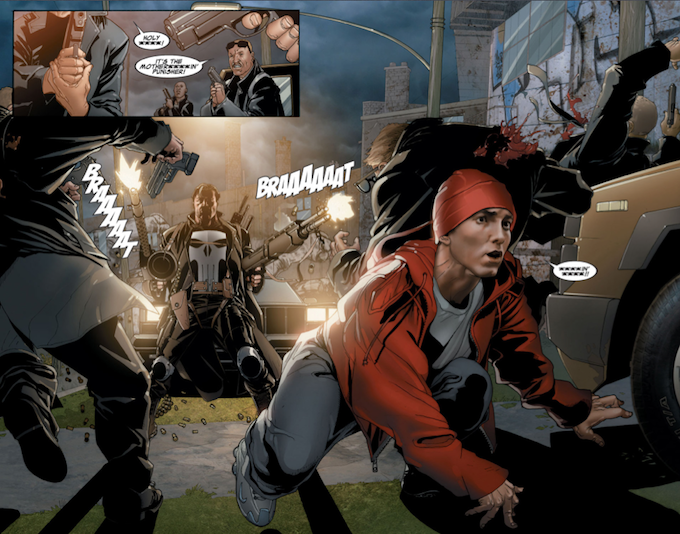 Dodging the gunfire, Eminem runs into minor the Punisher villain Barracuda (Punisher’s lethal style means he doesn’t have many recurring bad guys). It turns out Barracuda grew up with Marshall Mathers in Detroit and he even saw him do rap battles back in the day. So I think this means 8 Mile is now in official Marvel Comics continuity. 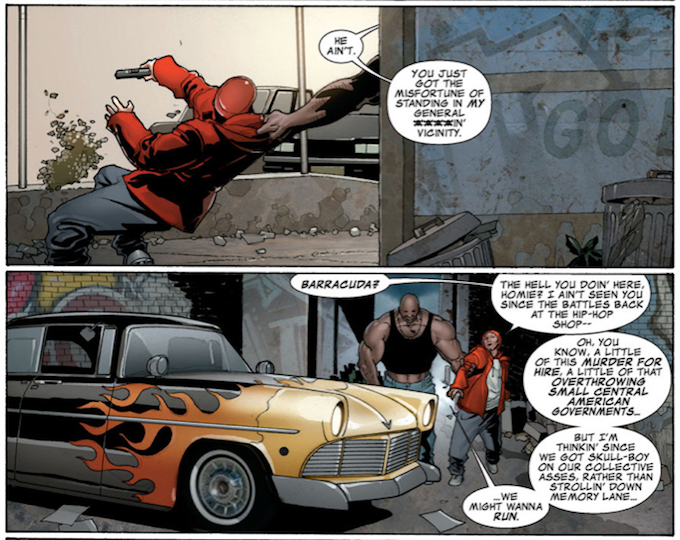 Punisher calls out Em, calling him a ‘Rock Star’, which Em is really offended by for some reason, despite that being the hook to “We Made You”. Em then pistolwhips the Punisher and shoots him, all whilst rapping “Kill You” off The Marshall Mathers LP. 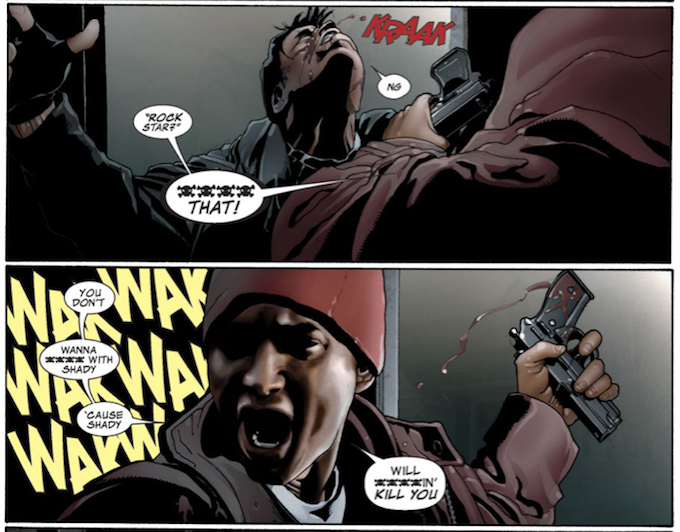 But then Barracuda turns on Eminem and shoots him point blank. We cut to a “Few Hours Later”, and this is when things get really crazy. ‘Cuda has tied up Em and Punisher (who aren’t dead, for some reason), put them on boat and sailed out to the arctic. He also sings “Mockingbird” to himself. 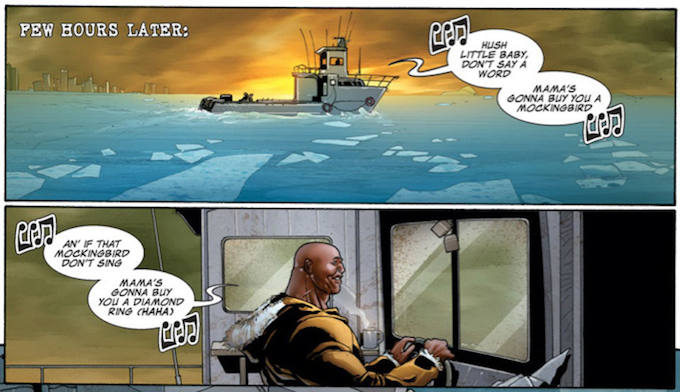 Punisher apologies to Em for murdering his entourage, and then explains that he was actually trying protect Eminem—because Barracuda had actually been hired to assassinate him by the Parents Music Council (a parody of Parents Music Resource Center). So the plot of this comic is basically Tipper Gore taking out a hit on Eminem.

So why doesn’t he just kill Em now? Because Barracuda’s masterplan is now to dump him in the ice, so that no one finds him—and then buy loads of Emimen merchandise on eBay, which he reckons will shoot up in value when word spreads about his disappearance. Barracuda is an idiot. 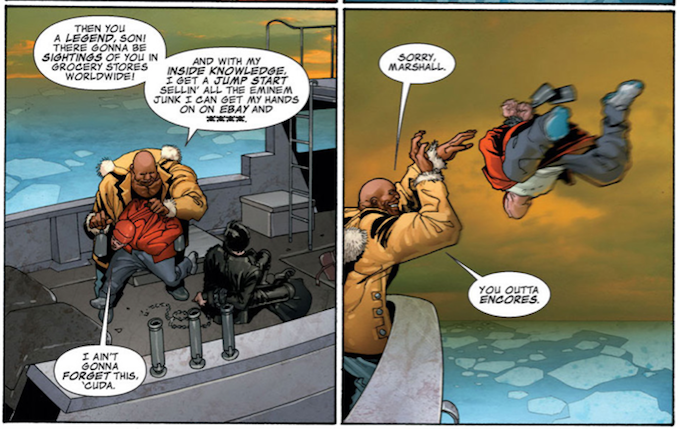 Barracuda throws Em over the side, but he doesn’t realise the sea is frozen, so Em escapes by basically just wandering off across the ice. Eventually, he bumps into a old guy fishing. Who just happens to be listening to Relapse on his iPod. He gives Eminem a chainsaw, because, well, Eminem and chainsaws. 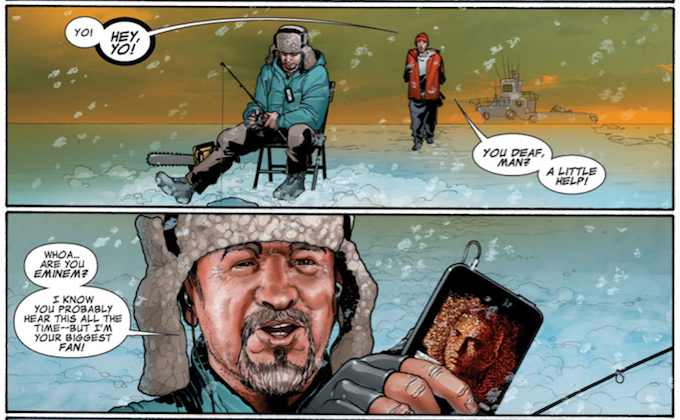 Eminem goes back, frees The Punisher and cuts Barracuda’s fingers off. 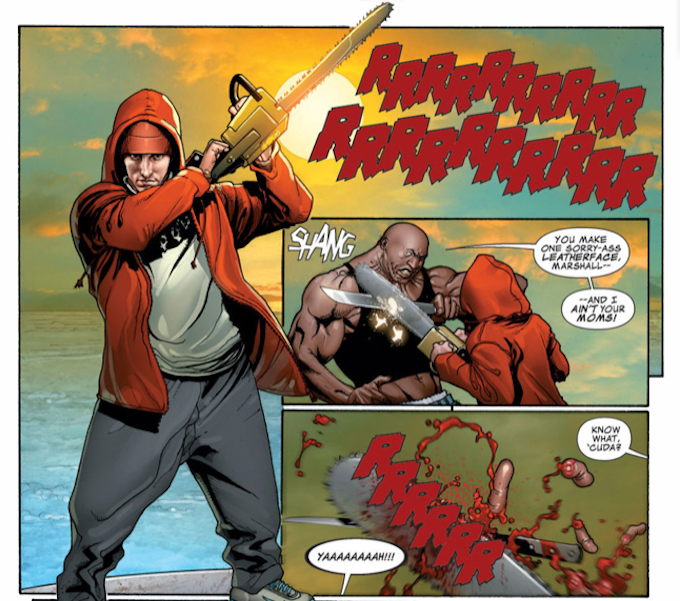 But before Em can get back on the boat, Punisher machine-guns the ice around him, leaving Slim Shady bobbing around on a little ice island. Punisher chucks a satellite phone to him, and then goes off to murder the Parents Music Council. 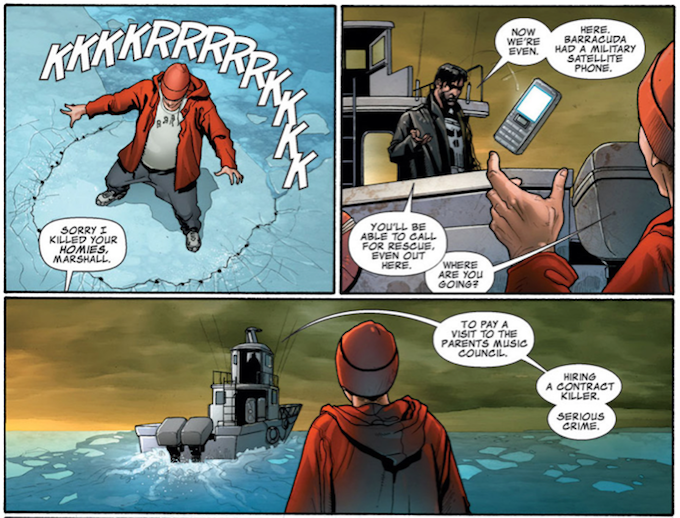 And that’s it. Eminem is just left floating around in the water, probably freezing to death before help gets there. We never did get a sequel where The Punisher kills Tipper Gore and it turns out the Parents Music Council was a front for Hydra.