A mega-rich banker (George Saunders) dies. Before he goes, he tells his grandson, Jim Bennett (Mark Wahlberg), that he’s not leaving him any money. That will help him build character. Bennett then goes to a posh household casino in the hills of Hollywood and gambles away what he has. Between the gambling den owner (Steve Wong) and Neville (Michael Kenneth Williams), a gangster who’d rather own an avocado farm, he has $250,000 in gambling debts.

Gambling scenes can be crushing. There’s the physical movement of pushing it all in, followed by the gasp at the table. The camera can hover over the stack of thousands of dollars, relegated to plastic shapes, which mock the real stakes. There’s the great myth of a “roll” in blackjack. You can only win so many hands in a row. It’s rife for studying a character who walks to the edge.

But The Gambler has a problem with creating tension. Not because these scenes aren’t filmed with slow close-ups, and tense facial gestures. They are. There’s no tension because Bennett seems to be able to get money from everyone.

After losing $80,000, Bennett asks Neville for $50,000 and Neville gladly obliges. Bennett loses what he makes from that by switching games and putting it all on the roulette wheel. But no problem, Jimbo, just meet Frank (John Goodman) in the steam bath, he’ll front you all you owe, even though you technically have zero money. Mom (Jessica Lange) will, too.

The conceit of The Gambler is that you’re watching a man who can easily get in and out of debt, and still chooses to gamble his debts against his debtors. Why? Well, cinematically, owing a bunch of people gives the handy film device of having a one-week countdown. Oh, but character-wise, it means he has a death wish. Because he’s not satisfied with his real life. He has no father, and no love in his life. His mother is cold. He’s a former novelist, who now teaches at a college. 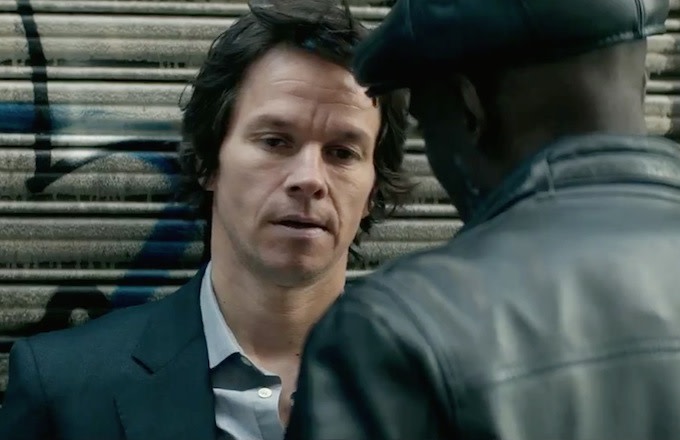 Said college, apparently does have the best and brightest, because his class has the no. 2 amateur tennis player (Emory Cohen), a consensus All-American baller (Anthony Kelley), and a genius-level writer who’s trying to blend into the middle (Brie Larson). That female student, Amy, witnessed Bennett’s losses at the private casino. She decides to become his lover. Calling someone a genius in front of 150 other students, and telling all the others not to even bother trying because they will never have the innate greatness that Amy has, turns out to be a pretty good pick-up line.

As a teacher, Wahlberg has some nice speeches about how greatness finds its way into random people, and that it rarely appears in those you’d expect to find it in—the spawn of the wealthiest—even though they have such better access to education and mentors. Mr. Bennett, who comes from wealth, thus had the genius deck stacked against him. So he’s unhappy.

Wahlberg is worlds better at playing an English professor than he was a math teacher in The Happening, so it’s a surprise that the tension problem of The Gambler lies in its blue collar thuggery, which is usually Wahlberg’s sweet spot. Everyone threatens him with words, but the worst that ever happens to him is a couple punches in a nail salon. He took a far bigger beating from a mountain that he owed nothing to in Lone Survivor.

So everyone gives Jim Bennett money, and Jim Bennett never has to face any real consequences. The only reason why anyone would care is because Jim Bennett is played by Mark Wahlberg. If you’re rooting for Jim Bennett to get out of a hole it’s because of the star playing him. Wahlberg is an old school movie star. He knows his limits and he knows his appeal, and he always thanks the military in public appearances. He usually plays underdogs, and thus, as a former underwear model who made it big as an actor, he’s often considered an underdog himself. But Jim Bennett isn’t an underdog. He’s a guy who makes a lot of bad decisions, but is played by a movie star. And that’s not enough.

Just like Jim Bennett, Mark Wahlberg will be fine after this prestigious winter dud is dropped. He’s a movie star, which means he’s gets to have his share of duds. Hopefully, Larson and director Rupert Wyatt (who left the Planet of the Apes franchise after his out of nowhere hit, Rise of the Planet of the Apes) will be, too. Larson showed great promise in a series of indies, culminating with her assured lead performance in Short Term 12. But other than giving one speech, and having curious eyes, she doesn’t have much to do here. She’s just another threat chip that’s pushed onto the table by the verbally threatening gangsters.

Which means she’s safe, because there are no consequences for Jim Bennett.

Brian Formo knows he’s not the lone genius in the room, so he gets to leave class early, and tweet here.