When he was nine years old, Ludwig Goransson’s father took him to a concert. Metallica was visiting their hometown of Linköping, Sweden, and the elder Goransson wasn’t going to miss the chance to expose his boy to the heavy metal legends. It was a wrap from there on out: Ludwig became a music obsessive, and moved to the U.S. to pursue a career as a composer.

Gigs on TV shows (Community, New Girl) and with musicians (HAIM, Chance the Rapper, Childish Gambino) soon followed, and after Ludwig formed a working friendship with director Ryan Coogler at USC, the two struck indie gold on 2013’s Fruitvale Station. That film earned Coogler major studio interest, and when the suits tapped him to direct the Rocky spin-off Creed, Ludwig was a natural choice as a composer.

The resulting soundtrack is a unique blend of modern and classic influences. Ludwig employed an orchestra of 100 and a 24-person choir alongside today’s biggest rappers: Future, Vince Staples, Donald Glover, and Meek Mill all lend their voices to Creed, often over the massive orchestra. It’s unlike any soundtrack you’ve ever heard, and we sat down with the Swedish producer to find out how it all went down.

How are you feeling now that Creed is out in theaters? How was the premiere?
Now I have the feeling that I’m fully done with my work. There’s nothing I can really change now. It was fun seeing the audience reactions at the premiere—to see where people laughed, and to see where people just stood and started shadow boxing was really cool.

You scored his first short, and you did Fruitvale Station with him. What was different this time around?
This was a studio movie. The director still has the last word, but there are a lot of other people that I need to please except for Ryan. It didn’t really affect the process at all, though, because everyone just trusted him so much. He’s really good with being a leader. What you’ll see on the screen is what me and Ryan wanted the movie to sound like.

The guest list (Childish Gambino, Future, Vince Staples, Jhené Aiko, Meek Mill) alone is really impressive. Was it tough to get all these big names on the soundtrack?
The first name that came to mind was obviously Meek Mill, because we needed a voice from Philly. Meek’s voice is just so aggressive. It really pokes out in a great way that I love so much. For me that was an obvious choice for the big training montage. The training montage was a six-minute piece of music that I wrote. It’s all full orchestral, and it has some dark 808s under it. In the middle there are all these dirt bikes coming out, and there’s a 45-second rap verse that Meek Mill is doing over that.

Then it all turns into slow motion, and I wanted something beautiful and angelic to come up. That’s where I thought Jhené would be amazing for that. It’s not words, it’s just instrumental and she’s just humming, then it goes really big with the choir and she’s floating on top of that. It just all came out really beautifully.

The way you described that sequence—it sounds like you’re scoring the film shot-by-shot. Was that the case for most of the movie?
I score everything scene-by-scene, and with every scene there are specific moments that I want to bring out, and that I wanted to highlight. That’s what film scoring is about. You just don’t write a piece over a scene, you need to tell a story with the music for the scene as well. You need to develop the music how the characters develop.

You just don’t write a piece over a scene, you need to tell a story with the music.

But you also wrote some more conventional verse-chorus songs for one of the characters.
When I first started working on the movie, I had to write for the artist in the movie. Tessa Thompson is playing an up-and-coming Philly artist called Bianca, and her sound is electronic—kind of that FKA Twigs, Kelela sound.

When she was cast, she was going to go shoot her scenes almost immediately. We had one week to write the songs Tessa was going to perform live on set. One week to come up with a brand new artist. She came into the studio with me and we worked for a week straight, and we collaborated with some other writers on those songs. One of the songs (“Breathe”) we co-wrote with Donald Glover, another song we co-wrote with another music friend of mine, Moses Sumney, and another with Sam Dew. The songs that came out of these studio sessions I think were really cool and pretty unique.

You and Donald go way back as well. It was about this time two years ago that you were heading out on his Deep Web tour. What stands out to you from that experience?
That whole tour is a haze for me. To go on tour and perform with the same people, and do the same thing for three months is, for me, like taking a vacation. I’m just used to being in the studio and having all these deadlines and all these people coming in, having to create and create.

So going on tour is like taking time off, and eventually I get really restless and want to go back in the studio again. I would definitely say it was a very special moment, because it was so fun to tour with that music, because it was music I was really proud of.

And you guys remained friends throughout. Are you working at all on his upcoming FX show, Atlanta?
I haven’t been involved in that yet. I’m sure I will be somehow.

Let’s get back to Creed: what kind of research were you doing in terms of the original movies, the original Bill Conti scores…
We watched all the Rocky movies and listened to the original music, of course. My biggest challenge for this movie was that I wanted to create something unique, but I wanted it to have the same impact the original Rocky music had 40 years ago. I wanted my music for Creed to be as original and legendary, I wanted it to impact people.

Something that I noticed when I went back and listened to the original score was how he mixed the classical orchestra with disco drums, and guitar solos. Conti was combining old elements with new elements. That’s something that I really want to experiment with now. I’m still incorporating a big, lush orchestra, but I’m also experimenting with my new production skills, and the elements I maybe use on a record instead of a typical organic orchestra score.

And you’re bringing in rappers like Future and Vince Staples to rap over these orchestral scores, I had never heard that before.
Yeah, for example on “Waiting For My Moment” that’s like… I don’t know, what would you call that kind of music?

Structurally speaking it’s not a rap song or an orchestral score, but I feel like you’re loosed from the binds of pop songwriting. Did everyone come into the studio to record directly with you, or were there some that were done remotely?
Almost everybody came in. That was another reason why I chose most of the people on there—I like working with the artists, and I like being in sessions with them, so we all recorded at my place, like Jhené and Donald. Future was remote, though. He was on tour.

Had you worked with everyone before? Was there any one session that stood out?
I had never worked with Vince Staples before. Seeing how talented he is, how fast he comes up with things, and how easy it was for him to rap over an orchestral beat like that really impressed me.

I hadn’t really worked with Jhené that much before, or had someone come in and improvise over a big orchestra piece. If you listen to “Fighting Stronger” towards the end where she comes in, she basically did that in five minutes. I was impressed with how amazing her voice is. I never heard her do anything like what she did for me. I’ve never heard her do that before. When you see it in the movie I hope that it gives people goosebumps.

What about your work as a solo musician—are you interested in putting out some solo work of your own? What do you think that would sound like?
I’m always trying to work on my own stuff as well, and I think I’m pretty even in being able to understand and create music that isn’t bound to a genre. I like to be open to everything, so I think if I would make something for myself right now the challenging part would be having it sound like a specific style.

Which is important if you’re trying to become an artist, but I’m not trying to become an artist right now. I want to do more stuff for myself, because it’s really good to let everything loose, and to not have to listen what anyone else says. But I haven’t really released anything like the soundtrack before—I’ve produced a lot of music, and I’ve written a lot of TV and film scores, but this score from Creed is me putting my own stamp on something. If people want to hear my voice, that’s where they can go.

Where did you guys record the orchestral sections?
All the orchestral was recorded at Warner Bros. We had a 100-piece orchestra and a 24-piece choir. It was such a special moment for me to work on music for six months, and then the last week we recorded everything with orchestra. Everything is coming to life. It’s like your baby getting born finally after nine months.

Where else did you gather sounds for Creed?
I went into a boxing gym and had a one-day session at King’s Gym in Oakland. I recorded a boxer sparring, training, jumping rope, and punching bags. Then I took all these sounds back to my studio and made music, and drum beats, and percussive elements out of that training, and kind of used it as a skeleton. If you listen to the score with headphones you can definitely hear all of those elements.

Have you ever used found sounds like that before?
I did for Fruitvale Station. I recorded the actual BART train in Oakland. I used that train and pitched it down, and made it this dark really ambient sound.

Creed is in theaters now. You can stream Goransson’s full score on Spotify. 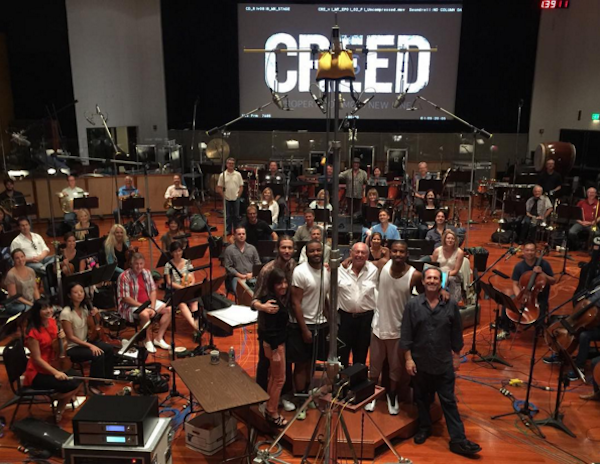