Shamari Maurice wears the Coach Toy Soldier Down Parka in Yellow, the Coach C210 High Top Sneaker in Chalk, and the Coach Gotham Backpack in Wild Beast Print Denim. Pants and glasses are his own.

Shamari Maurice is very aware of the double standard of Internet fame. He knows the skill level needed to navigate both the real and perceived worlds that he occupies. Maurice commands close to 34,000 followers on Twitter and 328,000 on Instagram, but his online presence can be a misleading one. Followers on the Internet lump him together with his famous friends, but few actually do the work to find out who he is. A 2014 MTV News post that charts the friend circles of the Jenner sisters, for example, posits the following biography under Maurice’s name: “Shamari loves Kendall and Kylie, has awesome green hair, loves to cuddle and has funny tweets.”

It only takes a few clicks to find out that Maurice rolls in a crew full of A-list Hollywood progeny—the current pop-culture pantheon if you will—that consists of Kendall and Kylie Jenner, Hailey Baldwin, Sofia Richie, and Bella Hadid, to name a few. Hollywood gossip site JustJaredJr.com keeps a running tally of the many times that he’s been seen in public or on social media with said squad of friends. While all of this tangential information is readily available, what’s vital to understanding the 20-year-old is knowing what he is, and what he isn’t. 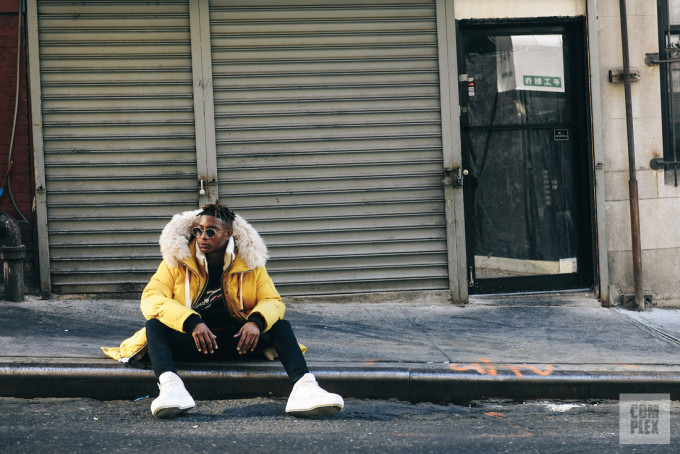 Maurice wears the Coach Rocket Ship Tee Shirt in Navy, the Coach Toy Soldier Down Parka in Yellow, the Coach C210 High Top Sneaker in Chalk, and the Coach Gotham Backpack in Wild Beast Print Denim. Jeans and glasses are his own.

“I feel like people have this misconception of me as this kid who's friends with everyone, who wears nice clothes, and just goes out and parties,” Maurice explains as we chat in the lobby of the Mercer Hotel. “It's like, ‘No. It's hard for me, I'm trying to work.’”

The self-proclaimed “epitome of an L.A. kid,” Maurice was raised between Los Angeles and the San Fernando Valley suburb of Van Nuys. He was born to middle class parents and has three brothers. Maurice had breaks as a child actor in shows like Ugly Betty and Modern Family. His brother Sheldon Smith, an actor as well, appeared in the movie Straight Outta Compton as Warren G. 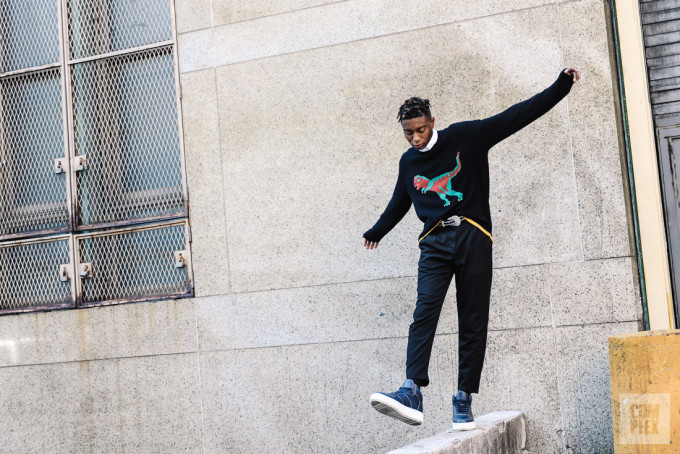 Maurice wears the Coach Rexy Sweater in Black and the Coach Contrast Stitch C210 High Top Sneaker in Navy. Pants, shirt, and belt are his own.

Distancing himself from the star power of his friends and finding his own creative lane is of the utmost importance to Maurice. This is why New York, as a backdrop to his one-man show, is such a crucial setting. Leaving L.A., albeit in month-long spurts here and there, has been important for Maurice. “My first impression of New York was ‘Woah, you’re not in L.A. anymore. Get over it,’” says Maurice.  “Each time I come back to New York, I just think about perfecting my work ethic.” With the new city come new lessons that are helping Maurice move towards his goals, as varied as they might be.

In person, he comes across as an eager future multi-hyphenate. His wide-eyed ambitions are too big to be focused on a single target. Currently, he’s pursuing modeling and styling simultaneously, continuing to mine the acting field, and taking singing lessons. He speaks of his aspirations to create his own app in the tech world, star in a Broadway play, and build "the Shamari Maurice brand.” He’s currently developing a luxury collaboration with an unnamed French bag maker. His ultimate goal, though, is to grace the cover of Forbes Magazine. Maurice’s path isn’t one that’s been blazed by wealthy or famous parents, so for now, he’s tracking every potential route, in hopes that one creative pursuit will lead him to that all important cover. 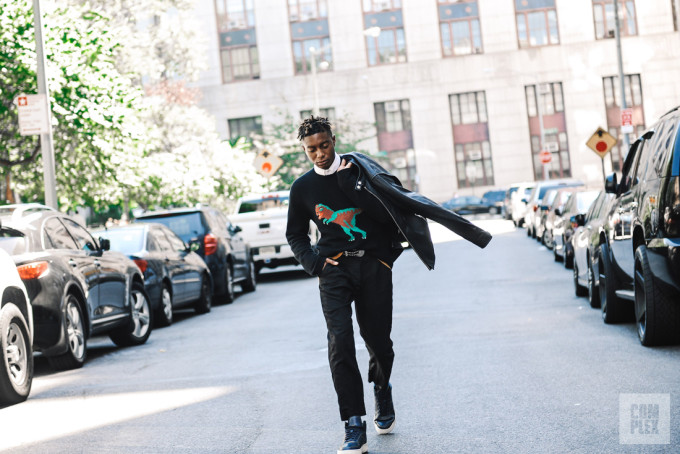 Maurice wears the Coach Washed Leather Racer Jacket in Black, the Coach Rexy Sweater in Black, and the Coach Contrast Stitch C210 High Top Sneaker in Navy. Pants, shirt, and belt are his own.

So far, modeling is one area that has already started to pop off for Maurice. For the Fall/Winter 2016 New York Fashion Week, Maurice opened the runway show for VFILES, clad in an oversized white puffer coat, matching shorts, and wheat-colored classic construction Timberlands. “That was a fashion moment that I never thought in a million years that I’d be able to experience,” said Maurice. “I’m close with Rox [Brown, stylist at VFILES], and I’d reached out because I wanted to help with the show. But they suggested that I should actually be in the show. I remember Rox saying ‘You’re lit. You’re gonna open the show.’ I was so scared. Everyone was so tall! My heart was beating fast the entire time down the runway.” Maurice posted a shot of his catwalk debut on his Instagram account. To date, the image has received 10,000 likes. 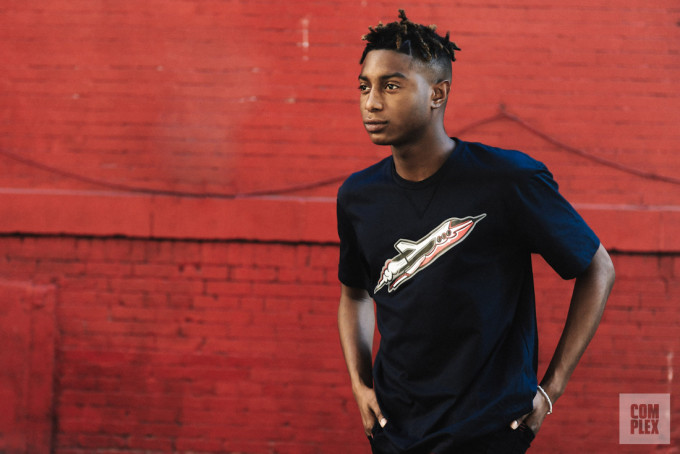 Maurice wears the Coach Rocket Ship Tee Shirt in Navy. Pants are his own.

Though Maurice is keen on branching out alone, no man is an island, so he still gets by with a little help from new friends who are teaching him the ropes. “I was talking to my friend who’s a model, Shaun Ross, and he’s been teaching me so many things about how to hustle here in NYC,” says Maurice.  “I'm not gonna say L.A. has no hustle, cause it does to an extent. But ,you come here and you can see on everyone’s face that everyone’s got something to do and has to go somewhere.” 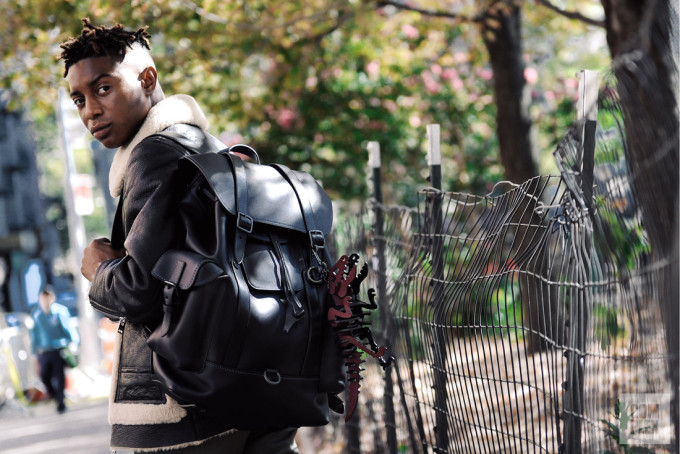 Maurice wears the Coach Shearling Stinger Jacket in Black Crackle, the Coach Gotham Backpack in Navy Glovetanned Leather and Black Copper, and the Coach Large Rexy Charm in Black/Burgundy. Pants are his own.

New York City is proving to be a teacher by adventure, with each stint educating Maurice on the different subsections of the sprawling metropolis. “I stay all over NYC: Midtown, Soho, Bushwick, the Upper East Side,” says Maurice. “I like to do that because I get a new experience each time.” Fittingly, this diverse curriculum of high and low culture has begun to shape his palate for food—“I love to eat at Fred’s, Barney’s rooftop restaurant, Bar Pitti, and any $1 pizza shop”—as well as his taste for style: “Here in New York, everyone is in a look. Each day, I really am getting dressed in the morning, because I know I’m gonna walk by 15 other people who’ll make me say ‘Damn!’” 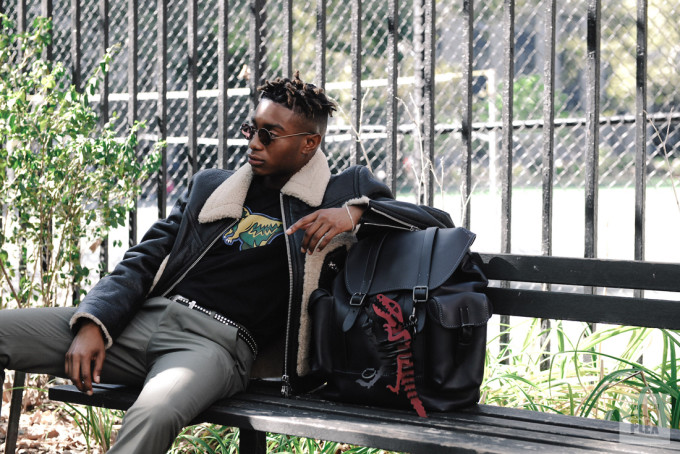 Maurice wears the Coach Shearling Stinger Jacket in Black Crackle, the Coach Rexy Tee Shirt in Black, the Coach Gotham Backpack in Navy Glovetanned Leather and Black Copper, and the Coach Large Rexy Charm in Black/Burgundy. Pants are his own.

Maurice has high hopes for what this city can bring his way. And there’s little doubt that his youthful zeal will help him tackle his long-term goals. But for now, he’s firmly focused on separating Internet Shamari from IRL Shamari, earning his creative merit one step at a time, and avoiding the pitfalls of social media hype. “People don’t understand that on Instagram, I post what I want them to see,” shares Maurice. “Just because you have that number doesn’t mean that you’ve made it.” 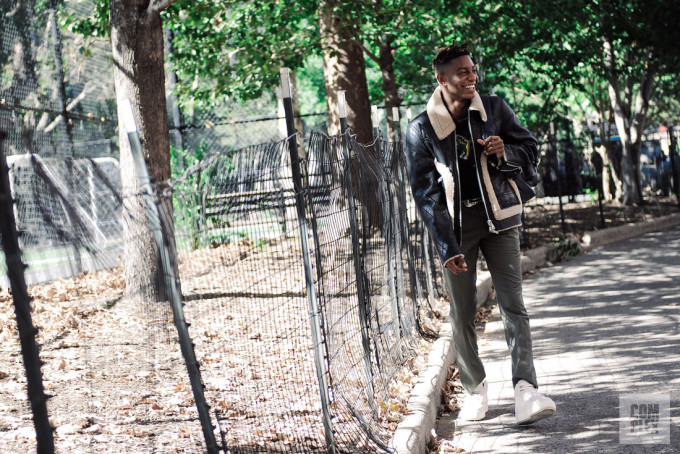 Maurice wears the Coach Shearling Stinger Jacket in Black Crackle, the Coach rexy Tee Shirt in black, the Coach C210 High Top Sneakers in Chalk, the Coach Gotham Backpack in black copper and navy glovetanned leather, and the Coach large rexy charm in black/burgundy. Pants are his own.