Swedish multinational clothing company H&M is being accused of some pretty troubling things because of a new clothing line and a thread on the subreddit r/Metal. The thread titled "H&M meets underground heavy metal. Quite strange" addresses a video posted to YouTube by an agency called Strong Scene Productions. The agency wrote on Facebook that they are "happy to provide a musical trip down in memory lane in support of HENNES & MAURITZ Heavy & Metal clothing line showcasing the talents and forgotten jewels of global underground metal music."

For those who don't know, Hennes & Mauritz is what the "H" and "M" represent in the company's name, but the issue here lies in what the underground metal bands represent. According to Metal Injection, all of the information about the bands advertised in the video is less than a month old. The site suggests that H&M made the acts to "create a backstory for these new branded lines of clothing they are selling," T-shirts and pants that bear the logos for the unknown bands. The article continues by saying that at least two of the bands have ties to Neo-Nazis in their fabricated bios, one with images of Hitler on its artist profile, and another that mentions a record label called "National Heritage Pride."

Metal Injection says that they contacted H&M for a comment, but the representative "seemed confused by the whole ordeal and asked for links." The Strong Scene Productions agency has since posted the following messages on their Facebook page. 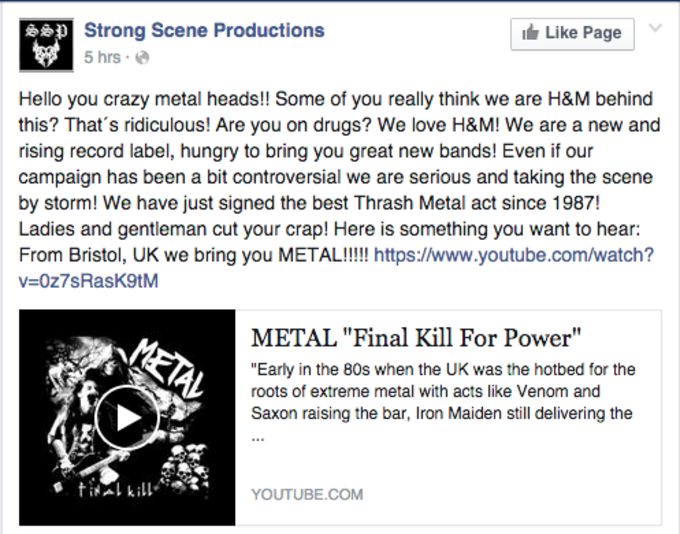 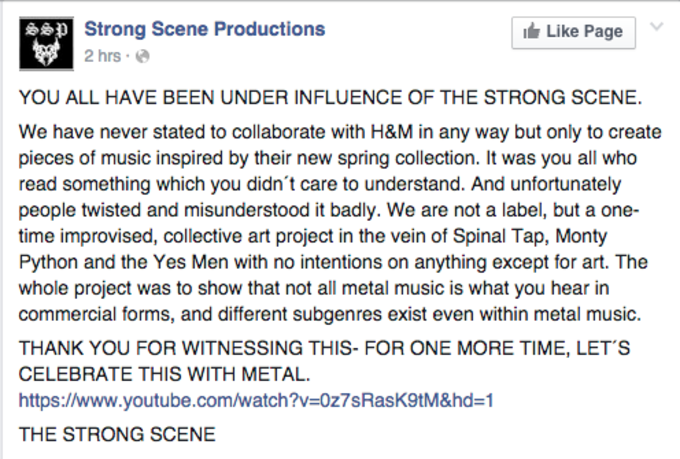 Metal Injection posted an update on their site that reads that "this may just be a giant troll by somebody in response to H&M releasing this clothing. Basically, the goof is that somebody was annoyed that H&M is co-opting metal, so they created this fake promo company as a way to troll H&M and metal fans."

Stay tuned to learn more about this weird story as it develops.