Shaq thinks the five best Lakers players of all time could beat the five best Bulls player ever "by fifty" if they ever had the opportunity to play against them. He said so on Instagram the other night—and then invited his followers to try and argue against him: 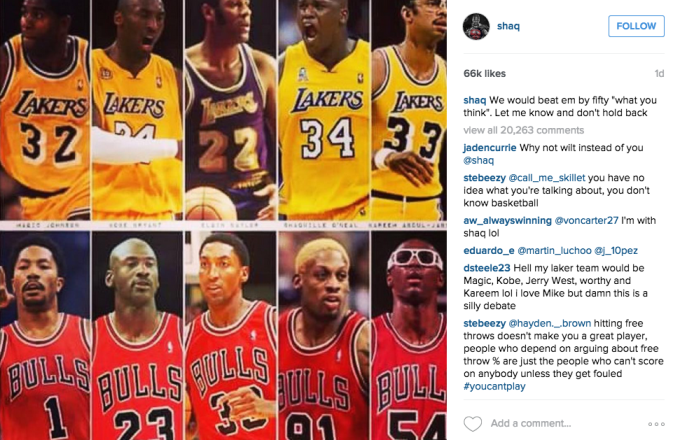 Many of them did, claiming that Michael Jordan would not lose a game by 50 points. And late yesterday, MJ's former teammate Scottie Pippen chimed in on the issue, too. He heard about what Shaq wrote on IG and reminded Shaq that his Bulls teams won twice as many NBA titles as Shaq's Lakers teams: 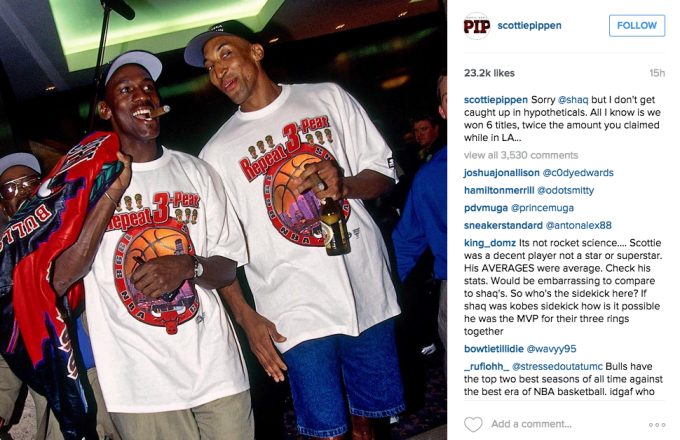 And apparently, that didn't sit real well with Shaq. After he got wind of what Pippen said, he posted a crappy Photoshopped picture on IG to remind Pippen that he wouldn't have won those rings with MJ. He also told Pippen, "I WAS BATMAN YOU WAS ROBIN, I was PUFFY YOU WAS MASE…": 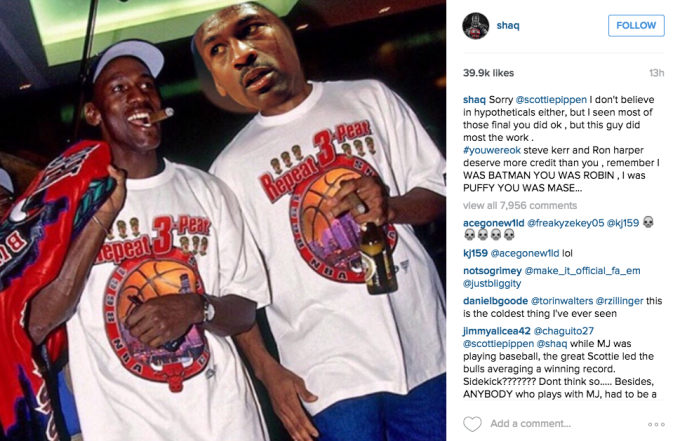 And from there, it was on. Shaq followed that photo up with another crappy Photoshopped picture of Pippen's face on a T-Mobile Sidekick, insinuating that Pippen was nothing more than a "sidekick" to MJ: 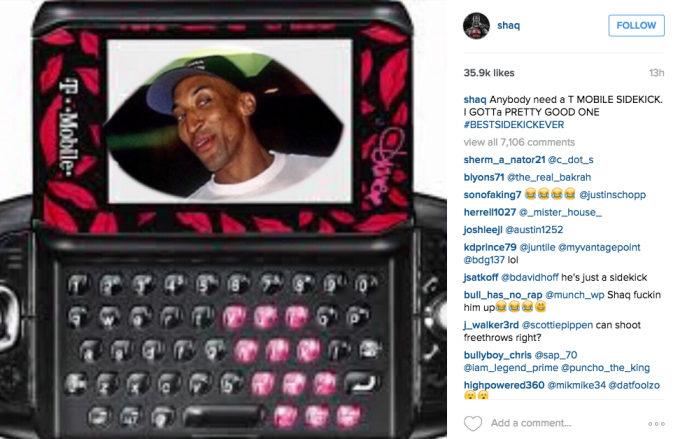 Pippen responded with a jab at Shaq's inability to shoot free throws: 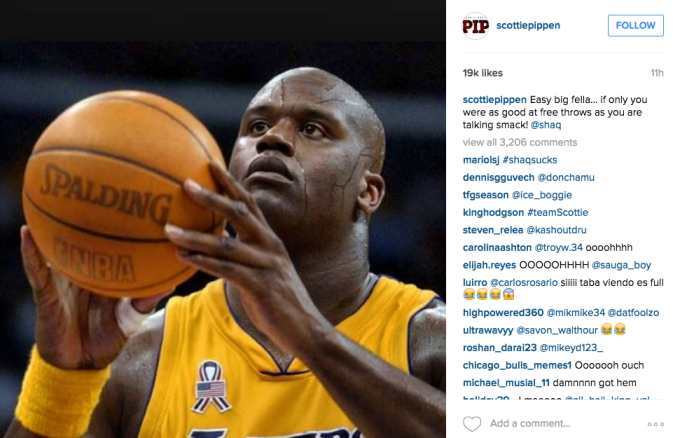 He also reminded Shaq that he was a sidekick on more than a few occasions throughout his career: 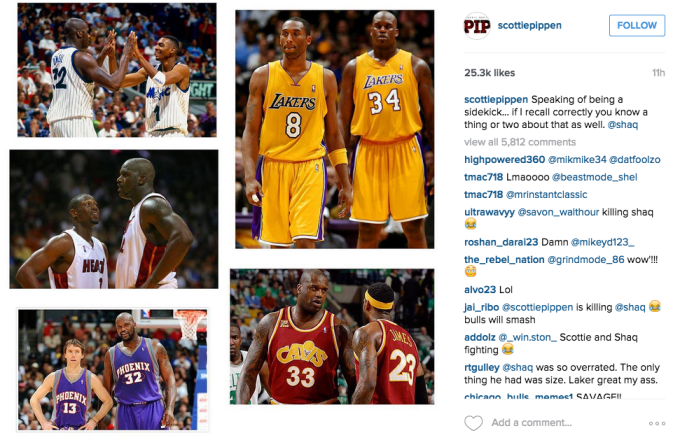 And while it took Shaq a little while to get around to responding to those jabs, he saw them very early this morning and posted a photo of his disgusting foot while again saying that Pippen was a "sidekick" and a "bum": 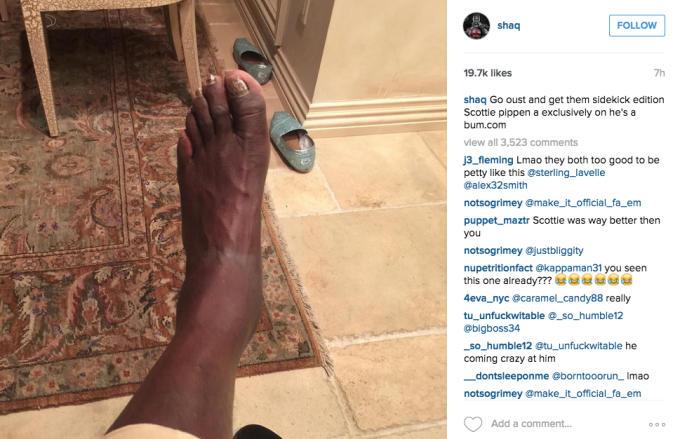 He also took it here: 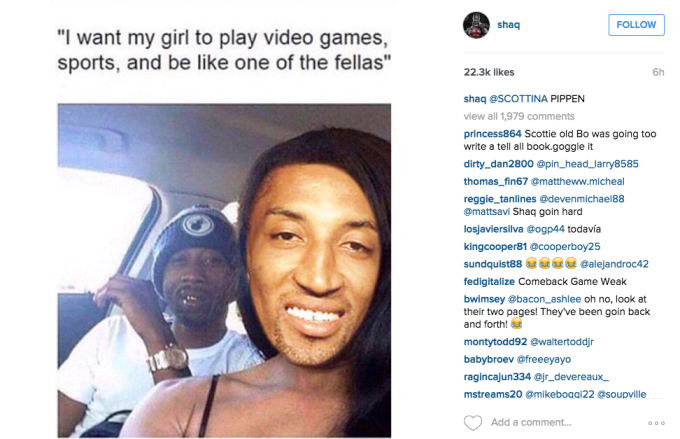 And to end things, Shaq reminded Pippen that, once he left the Bulls and didn't have MJ by his side, he wasn't able to defeat Shaq and Kobe Bryant. Specifically, he wasn't able to beat them during that infamous June 2000 game between the Trail Blazers and Lakers that featured this Shaq dunk:

It seems the back-and-forth might finally be over, because Pippen hasn't responded to Shaq, and it appears as though he's celebrating his anniversary today, which means we wouldn't expect to see him on social media much: 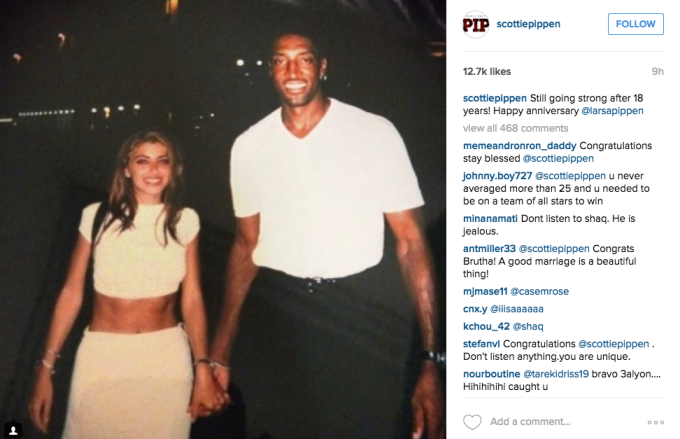 But how the hell did a ridiculous argument about a hypothetical Lakers/Bulls matchup transform into this? Stay tuned to see if any more shots are fired.