For years, there was a set of formations in FIFA that were never touched. They looked boring, and difficult to play with. The fun in FIFA comes from loading up your squad with as many attacking players as possible, and balling out on your friends. The less defenders you play with, the better. Playing with three at the back—meaning three centerbacks making up the backline in a 3-4-3 formation—takes an attacking chip off the pitch, so I never used it in my petty FIFA exploits. It looks like this: 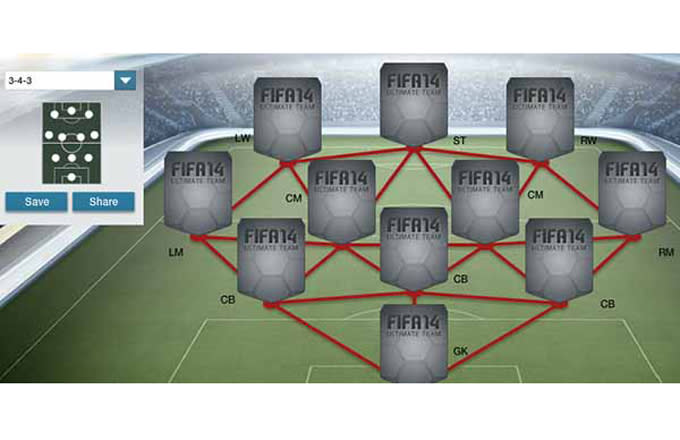 Most teams today play with four at the back. More defenders, yes, but the best modern fullbacks also live double lives as super tough wingers. Barcelona’s Jordi Alba, Real Madrid’s Marcelo, and Manchester United’s Luke Shaw are all wingers in disguise. In say, the good ol’ 4-4-2 or 4-3-3, two centerbacks are each flanked out wide by a fullback, which theoretically gives the attack one more body. Centerbacks, especially the brutish English types, don’t like to venture forward with the ball much.

Within the past month, however, I’ve traded in my bland 4-3-3 FIFA stripes for the edgier, more exciting gradients of the new designer dipped-dyed 3-4-3. A formation that was standard in the mid-20th century, and briefly again in the 1980s, playing with three at the back was virtually extinct as recently as 2009.

Style is cyclical, though. A recovery effort for three at the back was mounted in Chile and Italy in 2011, and every year since soccer writers have documented the bubbling trendiness of the formation, with Wigan, Everton, and Manchester City being the only notable Premier League examples to take the plunge.

Similar to the Gray Western Wolf, its advancement out of extinction thus far has happened quickly. The year 2014 was a huge boom for the international back three population: Louis van Gaal’s Holland and several other nations killed it at the last World Cup fielding three at the back. In Italy, over half the teams in Serie A are down with the Cause of Three. Juventus’ own 3-5-2 won them the league title. Bayern Munich’s Pep Guardiola has his own hot take on back threes.

Despite its successful reemergence, the formation remains a scary one to come to grips with. I was legitimately drunk the first time I tried out a back three in FIFA, and I got my ass handed to me. Playing a fully-realized back three requires more advanced skills out of the two side centerbacks than traditional centerbacks generally have, IRL and in FIFA. Clumsy beasts like Martin Skrtel or Brede Hangeland aren’t what you want. The ideal men have to have the feet and passing of a midfielder with the agility of David Luiz. They need to be able to cover speedsters on the wing and forwards through the middle. Those guys are scarce. Ball-playing centerbacks, as they’re called, are expensive—Mats Hummels, Gerard Pique, Thiago Silva, and whoever stars at the back for Pep Guardiola all are worth in excess £30 million. Playing an attractive three at the back takes a special collection of personnel to unleash.

He’s been referred to as Liverpool’s Rolls-Royce, but nah, Can’s more rare than that. He’s a German-engineered Ferrari.

Manchester United, in their maiden campaign under Louis van Gaal, have failed to grasp his 3-5-2 that was so successful for Holland the World Cup. No longer surrounded by tactically astute Dutch defenders, Van Gaal doesn’t have the personnel at United to properly run it (hence his frantic chase of Hummels in last summer’s transfer window). English defenders tend to stick to tackling and hoofing passes upfield instead of learning and mastering necessary ball retention skills. United’s crop of young-to-young-ish English defenders—Chris Smalling, Phil Jones, Jonathan Evans, Patrick McNair, and Tyler Blackett—have all made appearances at the back for van Gaal, but with the exception of McNair (in flashes, mind you), none seem to have the passing skill or coolness on the ball needed. English defenders lack the technique to play up to standards of van Gaal, or any other European manager looking to play passing soccer with three defenders. Playing with a back three has been merely a mask for the Red Devils to hide behind this season, as goalkeeper David de Gea and the attacking trident of Wayne Rooney, Robin van Persie and Radamel Falcao have powered "Long-ball United" into the Top 4.

While Manchester United’s back three moves with trepidation, Liverpool, currently sitting atop the form guide (they’ve only lost once since December) have seen their play enriched since the switch from a traditional back four to their regenerative 3-4-3. The Reds, however, are pasted together at the back using the viscid qualities of one Emre Can (pronounced “em-reh can”), their 21-year-old £10 million summer 2014 signing from Bayer Leverkusen. A box-to-box midfielder by trade who came up thru Bayern Munich’s youth system, Can ditched the Bundesliga for the prospect of more playing time with Liverpool. After an early injury, manager Brendan Rodgers has deployed him at right centerback during Liverpool’s recent strong run of form using their newfound 3-4-3 formation. 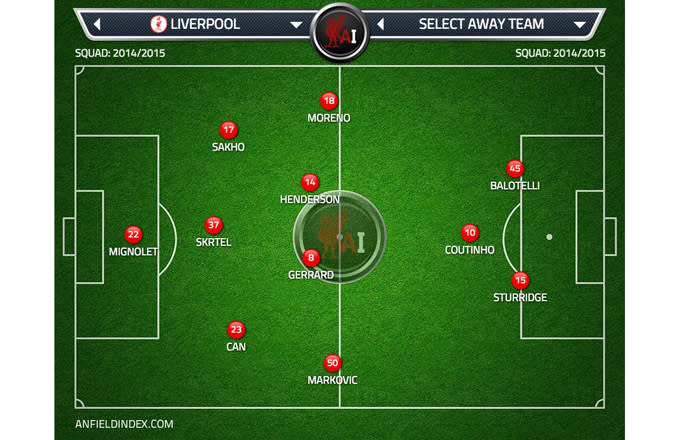 A German of Turkish descent, Can is the cheat code for the formation, and frankly, the key to its future. Sort of. He’s not, by any means, a new type of footballer. Had he played forty years ago, he’d be a sweeper. A throwback to the days of Franz Beckenbauer, Gaetano Sciera, and the mighty libero. In plainer language: Big soccer guys with steel balls and a confident haircut who can have a dominating, buccaneering presence on the pitch. They play defense however they’re supposed to, receive the ball, and get that shit upfield, either via their dribbling or their passing. Doesn’t matter. Just get on with it. Can, standing at 6-foot, 180 lbs and possessing a bullish, paced drive once he gets his legs under him, loves to get on with it.

For Manchester United and the like teams who don’t possess their own Can, getting on with it isn’t so simple. They tend to fuck up…

...while Can takes your lunch money...

...and pops off from distance.

He’s been referred to as Liverpool’s Rolls-Royce, but nah, Can’s more rare than that. He’s a German-engineered Ferrari, or as auto-racing enthusiasts would perhaps say, the Yung Michael Schumacher of soccer defenders. He allows Rodgers to shine a new attacking light on the back three formation, similar to what Guardiola experimented with during his final season at Barcelona. By playing with a ball-playing tour-de-attack centerback next to two less-skilled, more traditional defenders, a unique, impossible-to-account-for bond between defense and offense is forged. Can's mobility makes him an unaccounted for factor in all areas of the pitch, not just the back line. As he pops up into new positions coming out from defense, he pushes his wingbacks forward (which they desperately want to do anyway), helping create space for Liverpool's high octane attacking line to build and destroy through the middle.

Nobody can predict when Can goes on his tears through midfield, and since his inclusion in the back three, Liverpool have made far fewer defensive errors, and much-maligned keeper Simon Mignolet now leads the Premier League in clean sheets. His presence at the back calms fellow centerback partners Skrtel and Mamadou Sakho, who have a reliable outlet valve in Can right next to them when things get shaky (as they often do). Can, in turn, takes their passes and makes stuff happen. He keeps the ball rolling.

It’s punishing and awesome to watch. Can’s versatility and leadership from the back stirs the drink.

Manchester United may have their answer to Can in Marcos Rojo, a 24-year-old Argentine who’s reportedly the only defender van Gaal trusts at the club. He was bought for £16 million last summer from Sporting CP, but injuries have prevented him from settling in. Rojo matches Can with his own 6-foot-1, 180 lb frame, and is even faster and more adventurous with the ball at his feet than Can.

Liverpool and United may very well be the hamsters for a three-man defense in England, but that’s always subject to change. Rodgers and van Gaal have proven to be pragmatic tacticians (van Gaal obviously more so), letting holistic values inform their chalkboards. If Top 4-quality results aren’t met or injuries strike, the system will change. Philosophy over form, always.

And yet, there might be an opportunity for the back three to become intrinsic to how contemporary managers think. As the 4-3-3 and its variants became the default for prodding possession-based soccer (Rodgers’ signature Swansea sides and van Gaal’s championship Bayern teams are quite familiar with this), the 3-4-3 may become the adoptive formation for teams looking to impose an invigoratingly progressive style—proactive, swarming ball without chaos at the back—on basic-ass teams. This is potentially next-level shit we’re talking about here, guys. It’s punishing and awesome to watch. Can’s versatility and leadership from the back stirs the drink. Wingers have freedom to reign terror down the sides, and there’s room for strikers and midfielders to interchange freely and eat defenses, like an amoeba chowing down on paramecia.

To take full advantage of the speed that today’s modern players can bring to the English game, managers first need an anchor leg. For Liverpool, Emre Can holds the baton for their potentially disruptive stretch run through Europe in 2015. He’s not only the answer for Brendan Rodgers, but for FIFA gamers worldwide. Can can do it.