The protests and demonstrations in the wake of Michael Brown’s shooting have been visible all over St. Louis and the state of Missouri. And that continued at the Rams game last night inside of the Edward Jones Dome. There was plenty of excitement on the field during the San Francisco 49ers' 31-17, comeback victory over the Rams, but it looks like the real action took place in the stands and aisles, behind cheerleaders, across stadium screens, and anywhere else Ferguson protestors thought they could get their message on camera.

For some reason, though, Monday Night Football broadcaster ESPN elected not to show any of the banners or protestors in the stadium. Heck, they even ignored folks who were in front of the ESPN trailers right outside of the stadium.

Below are a collection of vines, tweets, and images that have to make you believe ESPN did everything in their power not to give Ferguson protestors a platform for expression. Rams fans get the big picture. Why don’t you, ESPN? 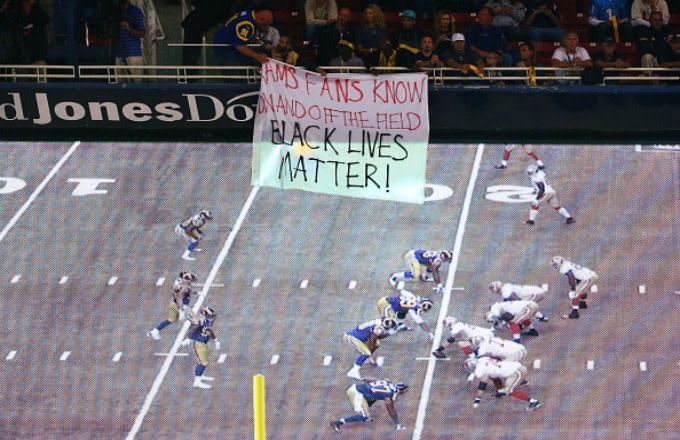 Outside the Rams #mnf game!! In front if the ESPN TRAILERS. #fergusonoctober pic.twitter.com/PXSnXkud4j

ESPN is scared of anything Ferguson. Eventually they will have to address this situation. Rams broadcast last nite Cards in playoffs.

@ESPN Great job ignoring Ferguson protesters at the MNF game. They were everywhere in St Louis, and you paid them no mind! #FergusonOctober