If you have even the vaguest interest in dance music or club culture, Ministry of Sound is a name that needs no introduction—but lemme give it to you any way. Now coming up to their 25th birthday, Ministry opened in London in 1991. It's aim was to inject a bit of 1980's New York into the city, dedicating itself to American house with a set up not vastly dissimilar to Paradise Garage. At Ministry, the soundsystem was King, and everything else an accessory. In 1991, when Ministry arrived on the scene, London's nightlife as we know it, had barely begun. Most late night venues were more focused on the look and feel of the place than making sure that the music played in the venue was at it's most powerful.  Ministry, alongside a few notable others, elevated the city to become of the dance music capitals of Europe, if not the world, and although those glory days of London clublandia are now sadly behind us following a number of closures, Ministry has already earned itself a place in the history books of London.

These days, the nightclub is just one side of what Ministry of Sound do. They also run a music label (major signings: Wretch 32, Example, DJ Fresh and London Grammar) and now, a range of audio devices made up currently of speakers and headphones.

They sent us the Audio S Plus, a chic, pod-looking device that looks tight in most living rooms, kitchens, poolsides, car 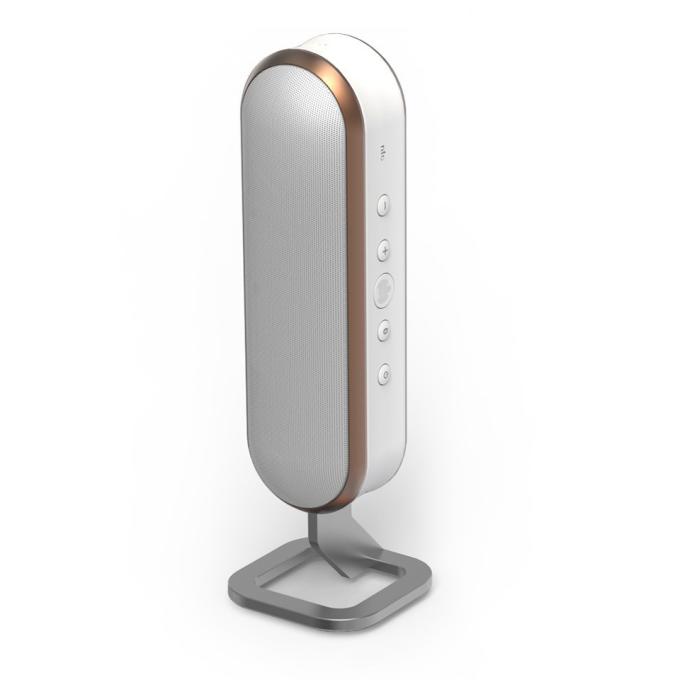 dashboards, hotel rooms, tent floors and anywhere else you can think of. These days though, looking good is not enough. There are many speakers that look the part but they last about two hours and skip at the minor vibrations of a chair moving on a wooden floor. Those that can cater for the kind of totally-normal use a music-lover might want can cost a small fortune. Is there finally an (affordable) bluetooth speaker on the market that can actually withstand regular use without kid gloves?

We tested it, and the answer is yes.

The battery is solid and will last a good five hours, and can be charged using the same plug adapter you use for your iPhone (i.e. a USB plug adapter). It's splashproof provided you have the rubber sheath on it, which incidentally is attached so you can't ever lose it. It will save up to 7 devices in its memory so you don't have to faff around with passwords each time you want to connect, and you can even connect to two at the same time if you want to go surround sound. It's a durable little thing - it's survived being in the airplane hold for at least two long haul trips - and they can play fine if they're knocked a bit.

The downside? You need to keep your phone pretty close to play from it, especially if the battery is low meaning its not necessarily the ideal thing to be using if you want to mingle at a party. It also means you can't takeover the music from afar when that one jerk turns up to said party at 3am insisting on endless LMFAO. But at less than £80 each, its not a bad deal.