If you thought that locking up Kentucky's loudest homophobic idiot Kim Davis would do anything as far as silencing the baffling debate surrounding her legal obligation to issue marriage licenses to same-sex couples, then the past few days have likely been very disappointing for you. The media circus generally reserved for anything Donald Trump does has now temporarily relocated to Kentucky, placing its finest performers on national display:

However, one largely ignored victim of this ongoing debacle is the woman unfortunate enough to sit next to Kim Davis. As shown in the clip above, this woman mourns in relative silence as ringleader Davis fields questions she can't actually answer from people she clearly despises. What can fellow Americans do for this victimized desk dweller? Is there any hope for the woman sitting next to Kim Davis? 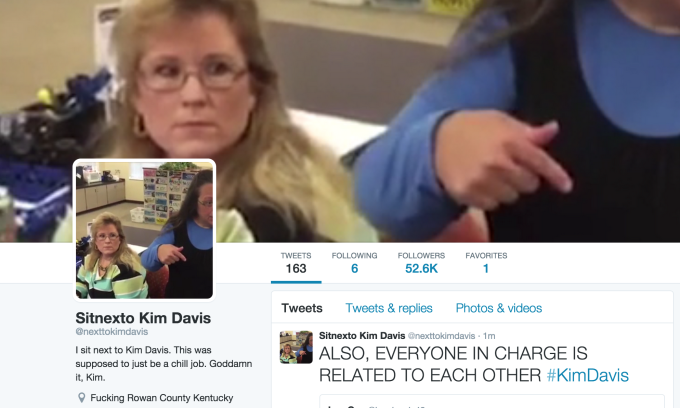 As you might expect, the gems from @nexttokimdavis are seemingly endless. The account has remained consistently active since appearing on September 1, currently amassing more than 50,000 followers. The auteur behind this brilliant scheme is currently unknown, which is absolutely fine because it's a great deal more fun to just imagine these coming from the actual woman sitting next to Kim Davis:

Thank you, Internet God. For more Kentucky fuckery, look no further than the clip below: