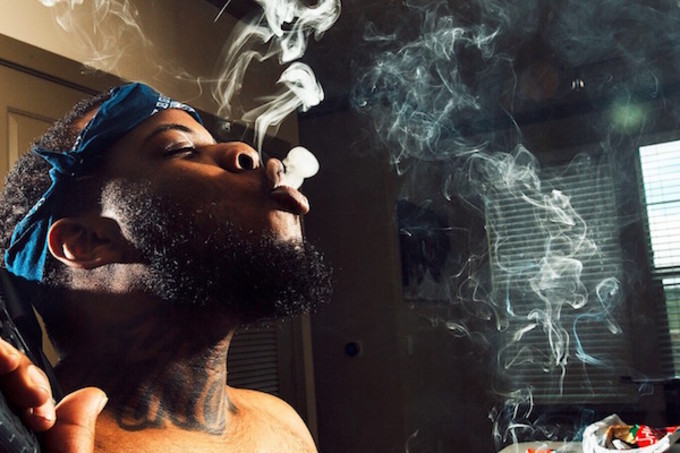 An auteur lurks beneath Maxo Kream’s hardened Houston hustler exterior. Less concerned with the tropes of his regional predecessors yet nevertheless indebted to them, the recording artist uses raw proficiency and subtle styling—old school-approved bars meet criminal cinema—as his fuel. It’s only a matter of time until he’s ready to take off.

The Texan rests just below wider emergence, approaching a crest off the strength of notable features (he counts Joey Bada$$ and Father as friends) and millions of streams. He peddles dope-driven narratives over production triangulated by minimalist trap (“Shop”), grim grime (“BIG WORM”), and horror scores (“Hit Mane”). Memories of swiped trading cards coexist with varying degrees of illicit activity.

“A lot of n****s play the sideline—mascot, cheerleader, pom poms never get involved,” he spits on the recently released “Choppas.” Kream minds his words, selecting them with care. From the UK to the Bay, influences abound, but his sharp and occasionally comedic rhymes are distinctly his own.

Read our interview with the Houston rapper below, and let his latest project, The Persona Tape, play as you scroll. Expect big things from him this fall.

You’ve referenced Pokémon in previous raps and said you’d take cards from kids, what’s the greatest card you ever stole?
Mannn, it had to have been a Charizard. And then, one time, I had like a hologram—not Exodia, that’s got damn Yu-Gi-Oh. I don’t even know about that shit, that shit’s too complicated n***a. That shit was chips, Pokémon was chips. I thought I had a hologram Pikachu, but really, back in the day, you’d go to Cicis pizza, put in 50 cents and you’d get a sticker. And the sticker would come out looking like a hologram! I got in fight because someone tried to sell it to me as a card. After we got our asses whooped we were back on the bus. But yeah, I thought I had a hologram Pikachu.

Are you in on the Go craze?
I don’t even know what that is. I had a show in Houston, and the fans took a picture with me, and somebody was like, “Oh sweet, I just caught a Pokémon! That’s so crazy.” I was like, “What the fuck are you talking about?” I looked at him weird as hell. Then I looked it up on the internet and saw all this stuff and I was like, “Damn,” but yuh, I’m not into that right now.

Houston brings to mind iconic norms that the city’s forebearers established long ago. You bring a different strain to the equation, but how did you perceive the local scene as you grew up?
I mean, shit, you know, I grew up on what I can remember. Lil’ Keke… I was about 10 at that time. Paul Wall, Chamillionaire, Slim Thug, you know, they all came and went. Everybody be looking at them back then, but now, things are hella changed. I’m from the southwest side of Houston. I feel like there’s a whole other world. It was all turnt-up, more gang-bangin’, shit like that. You can hear that within my music.

But you go throughout the city and there’s all different kinds of stuff. Houston definitely evolving from what we was back in the day. And I know a lot of people be coming down here, thinking of us like, [begins speaking in heavy, exaggerated drawl] “Oh shit, man, wassup, y’all boys coming down? Y’all boys comin’ slow?” Like how it was back in the day, and that kind of remains. I see it getting healthier though, people think we just rap one kind of way. I see a lot of spitters coming out of the city. I feel like the Houston rap culture is real healthy and it’s developing. I feel like it’s time for another outbreak, like we did with the whole Mike Jones, Chamillionaire, Paul Wall—another boom.

Was it common to have arguments over your favorite H-Town rapper? Pimp C (RIP), Bun B, that sort of thing? How much pride do people have in those artists with towering legacies?
Hell yeah, but, you know, I don’t think people would get down. Around my time, people were saying Paul Wall or Slim Thug, rather than Bun B or Pimp C, whether they’d pull it off—don’t get me wrong, they were a part of the trill movement. They’re Houston artists. But my favorite personally was Lil’ Flip. He went hard, he was swaggin’, he just did the whole persona from the throwbacks to the headband. He was the only one who had a throwback high school jersey while he was still in high school. Yuh. It was more just about the way he rhymed, his swag, a young n***a doing it. Also, like, Mike Jones. He could rap too but he ain’t gonna repeat himself [Laughs].

Beyond the candy-paint cars, if you had to show somebody the real Houston, where would you bring them? What would you tell an outsider?
First, I’d take them to Alies. I’d take them to Forum Park. Then I’d take ’em to Spice Lane and show ’em how n****s are living. N****s aren’t really sipping real drink out here like that, it’s so fucked up. Everybody think we’re just coming down like that, but n****s ain’t really sipping the real thing. They’re sipping Watson, all the brand-ass shit. So I show them, don’t think n****s just out here sippin’ the drink in their cars. Nowadays, most people out here are trying to get foreign, iced up. We been iced up since back in the day, but a lot of n****s don’t even got cars. I’ll show you the southwest part of Houston. I feel like every part of Houston been rapped about, but nobody’s really rapped about the southwest side.

You flipped a Wiley song to make “BIG WORM,” what attracted you to grime? When was the first time you connected with Wiley or Skepta?
Shit this was all recent. Ryan [ESL] been my producer, he made “1998” with Joey Bada$$, stuff like that. But when I got on the beat [Wiley’s “Morgue”], I didn’t even know it was a grime beat. I just really fucked with the sound. It was dope. It gave me a way I could rap using a different flow. All the beats I was getting were the same. This beat was so different and it still jammed, I was like, “Hell yeah this beat fire.” I didn’t know it was a grime beat until I released the song and people were like, “Yeah, this is that Wiley ‘Morgue’ track.” He reached out to me on Twitter, and I started doing my research. I was like, “Damn, this grime shit is dope as hell.” It’s something I really fuck with. Big homie Skepta, he reached out too. Skepta told me to keep going, he gave me a shoutout, he posted the song and video when it dropped. He’s a real n***a.

What would you say of Shea Serrano’s importance in the Houston scene?
Shea Serrano, he did a lot for the Houston underground culture, as far as recent artists. It’s a lot y’all don’t know about. He has a lot of talent, he’s really developing right now. He was one of the key people reaching out, doing write-ups, articles. He’s very in tune with Houston rap music. A lot of n****s out here on some dick-sucking shit, but not him, he wants the facts. He’s a real-ass n***a.

Joey Bada$$, Father… you’ve worked with artists who don’t necessarily come to mind when one listens to your work. How do you find that common ground?
All that shit just be organic. Joey Bada$$, I’ve been fucking with him since he first came down to Houston for the Smokers Club. We did a freestyle cypher, that went up on YouTube three or four years ago. All that be natural. The shit with Father, I bumped into him like two years ago and he was like, “Ohhh shit! You’re Maxo! You’re Maxo!” He’s a cool little weird-ass n***a, but one thing about him is he’s real. He’s a normal n***a, he likes bitches. And that n***a get bitches. Any n***a who can be himself and get bitches, I respect you. I was just in Brooklyn with Joey not too long ago. Father hit me up when the mixtape dropped.

You continue the hip-hop tradition of referencing Home Alone on “Talkin Shit,” what’s the best scene from that film?
The best scene? [Maxo proceeds to reenact the movie’s burglary scene, word for word.]

Were Memphis artists an influence for you? Memphis and Houston are like cousins.
Oh, shit, like got damn Three 6 Mafia and Project Pat? Man, I’m from the south. I didn’t really just grow up on Houston music, I fuck with all that. Juicy J. One of my favorites [launches into Juicy J impression],”It’s slob on my knob / Like corn on the cob.” And then they got that song “Ridin’ Spinners” with Lil Flip.

Do you want to continue building your buzz in the place that raised you or move to one of the coastal hubs?
I mean, shit, you know, anything to better myself. But I don’t feel myself leaving Houston. New York, that shit’s uncomfortable cost too damn much. Cali cost too damn much. At the same time, I do travel back and forth because of my music. I’m doing Maxo Kream.

Millions of streams, big-name features, major press coverage…you’re flying just below wider recognition. What did you want to achieve with The Persona Tape?
Man you know, with this project I just wanted to give something back to the fans. This was just a mixtape, it’s doing good. I’m glad it’s doing good. I strive for all my shit to do good, but it was just a tape. After this it’s going to be more personal, the album is going to everything for me as far as reach. The Persona Tape was just to hold fans over to keep them good. They be complaining like, “Damn! Drop something you f*cking bitch!” I know they just be waiting for the music though. I was having fun with it. The next project will have a storyline, a script. That’s going to be my serious project. It’s dropping this fall. My fans be like, “Where’s the music at you fat motherfucker?” I love my fans.