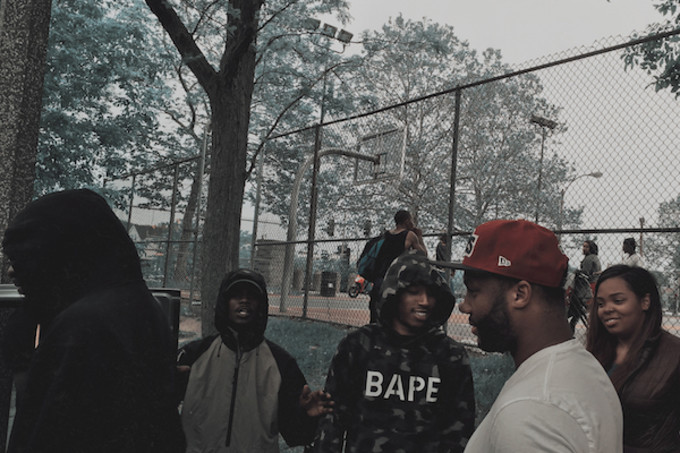 Shit as long as my dogs here? I don’t really think I got a problem.

The random percussive pattern of basketballs slapping against concrete rings out on a calm, overcast Sunday afternoon in Boston’s Dorchester neighborhood, a historic district that is also one of the city’s most dangerous. Doherty Gibson Playground—nicknamed Gucci Park by locals because of the court’s colors—is situated alongside Dorchester Ave, a main vein that runs through a subsection of the area, one where who you know makes all the difference: Fields Corner, Cousin Stizz’s side of town.

“The park is definitely an important spot for me, it’s a big one,” he says while munching on corner store snacks. Stizz invited Pigeons & Planes to visit the home turf which inspired his formative mixtape.

“We all grew up here. I learned all my life lessons here. Just life shit, growing up shit. Being a teenager and finding my way. Learning how to survive. I’ve been coming here since I was 14. I barely spend any time here now because I’ll be working, but back then? All day. Summer fun.”

Dej Loaf’s “Try Me” and a Kendrick Lamar remix of “Pound Cake” soundtrack the gathering. I’ve never visited the park Stizz calls home, but familiar faces abound. A majority of the assembled men and women have appeared in at least one of his music videos, including Lil Mack, a young boy who weaves through the small crowd as comfortably as a cub in tall grass. Some of the men joke with him as his mom makes sure he steers clear of the street. Together, they create a buffer zone for him to run free. It’s a family thing.

“I’ve known these people since we were youngins. I’ve known this guy, Frank, since I was 11. Pistola, Big Leano [Boston artists] always came here. Mad niggas used to chill in the park. We used to get high and freestyle, those are some of my earliest memories with rap. Getting high and saying dumb shit on the track, funny stuff. Outlandish bars.”

Someone talks up their shooting skills from beyond range before airing a half-court jumper. Stizz snickers.

“After they stop shooting around, we can walk around. I’ll show you the places we used to go to everyday.”

“I feel old, man, I’m hurtin from playing ball” a friend interrupts from the inside of a parked car.

The remark resonates with Stizz. “I was just saying that yesterday. We are getting old.”

“Y’all are still young, very young,” another voice chimes in, reminding the twenty-somethings they have a lot of life left. An unidentified car cruising towards the court ends the conversation. 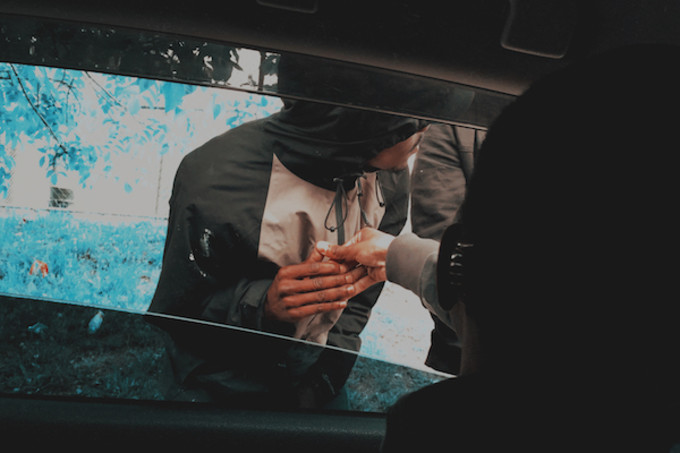 “HEY YO! Who’s in that red Jeep!” Frank calls out.

Everyone keeps calm, but an air of suspicion sweeps over the court. The basketballs stop bouncing for a moment; fortunately, it’s a false alarm. An hour later, as Stizz and his friends sip from Arizonas and handle rolling papers, they explain the concern.

“Any day when it’s nice out it’s crazy,” Stizz says. “The heat brings the aggravation, it drives people. Summertime on Fields Corner, man. It’s a different type of summertime.”

“So many people be driving by here,” his friend says. “This is why we watch out all the time, but we can’t watch everybody. When somebody drives by and sees someone on the court they don’t like, they shoot at the court.”

“Never hits the intended target,” Stizz adds with a shake of his head.

“Yeah, so now everyone is alert. Some people feel awkward but we have to do it. One time we were sitting at the bleachers [a short way past the courts, deeper in the park], smoking over there. We see someone hop that fence, run over here and shoot at the court. Boom, boom, boom. Three people were sitting right there and they didn’t even move.”

“Maybe it’s the cops,” someone else adds, only half-joking. “But there’s not one camera facing over here, so we’re fair game.”

Keda, a courtside regular and longtime friend, playfully imitates Chief Keef’s “BANG BANG” ad lib to break the suspense. He begins to freestyle on the sidewalk. A recurring line, delivered with a wink, follows every offtop verse: “All you need is faith as small as a mustard seed bruh.” The makeshift adage turns into the day’s catch phrase.

“Small as a mustard seed,” Stizz agrees, amused. He looks around to ensure everyone’s tuned into the neighborhood’s latest serving of comic relief. “These raps are so fast forward,” he says to his friend, a toothy grin on his face. He offers adlibs and affirming “yups” between Keda’s bars.

“Oh my god, why is this still going on?” someone asks with a laugh after Keda finishes a couplet about the sun’s hot temperature.

“Aye, you gotta sell that shit to your mind!” he responds, complimenting his own effort.

“You won’t understand these bars until you get to the crib and lay down!” Stizz cracks, losing his composure.

Long after the circle disperses and the Fields Corner tour moves on, Stizz periodically forms a small claw with his thumb and pointer finger to reference the size of a mustard seed. His grin is never wider. Inside jokes are alive and well in this part of town. 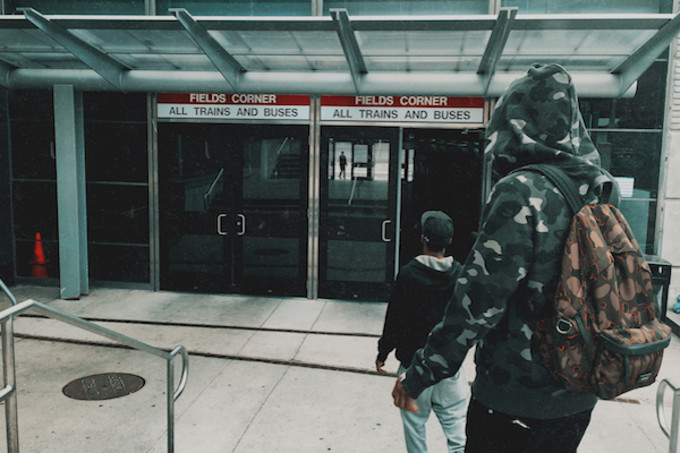 “The Red Line [a part of Boston’s public transit system, the T] is right there, my homies grew up right there. This is the illest place ever,” he says as five of us leave the playground, pointing left and right. “It’s so everything—diverse as fuck. It gets nasty once we get under this bridge, though,” he says. A small bridge arches over Geneva Ave, just a block away from the park. Safety varies street by street. Sirens and the click-clack of trains sliding over tracks accent the late-spring soundscape.

A pit stop at Ramirez Grocery results in replenished Arizonas and Herr’s Ketchup chips. We pass DYC (Dorchester Youth Collaborative), a safe haven for kids that was founded in 1981. Stizz credits the communal space as a crucial part of his upbringing (“We grew up in there. The grow-up spot for all of us, literally”) He struggles to pinpoint a specific memory because there’s so many to sift through.

His friends do most of the talking, trading stories about growing up, women, neighborhood skirmishes. Save for bursts of laughter, a common occurrence, Stizz tends to keep quiet. Suffolk County embodies this character trait. Stizz is a straight shooter. He favors small batches of simple lines that let listeners fill in the blanks. The tweetables he churns out hold true online and on city corners. After a few hours, it becomes clear the economical rap style is a true reflection of his day-to-day mannerisms. 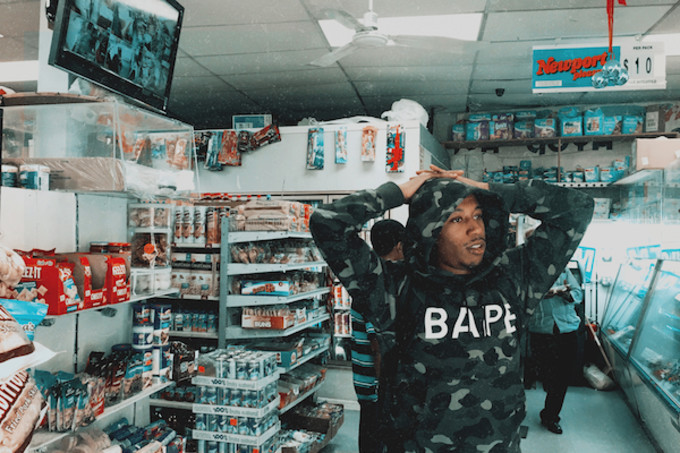 Strolling past the locations he used to frequent, Stizz does have something to say.

“Yo, behind that McDonald’s, near that alley over there, that’s very important,” he laughs. “Behind there, because we used to be cold as shit in the winter, we used to smoke. 48 niggas on two blunts!”

“A long line of niggas,” his friend confirms.

Stizz cracks up before adding some flair to the tale: “A thousand niggas on two blunts. Everybody knew it too man, that was the spot. We were hella young.”

Nearby, a T-Mobile store occupies a retail space once filled by a cheap Chinese dive called Yum Yums. The mere mention of the name sparks another trip down memory lane.

That McDonald’s didn’t escape the debauchery of Stizz and co., either.

“We used to all go there and cause havoc,” he says cheerfully. “We were up to the most. What weren’t we up to? That was everyone. We’d go there to bag, bust plays, roll up.”

“Somebody cops one cup of something, 20 minutes later someone cops another cup. Splits it. No food purchased.” 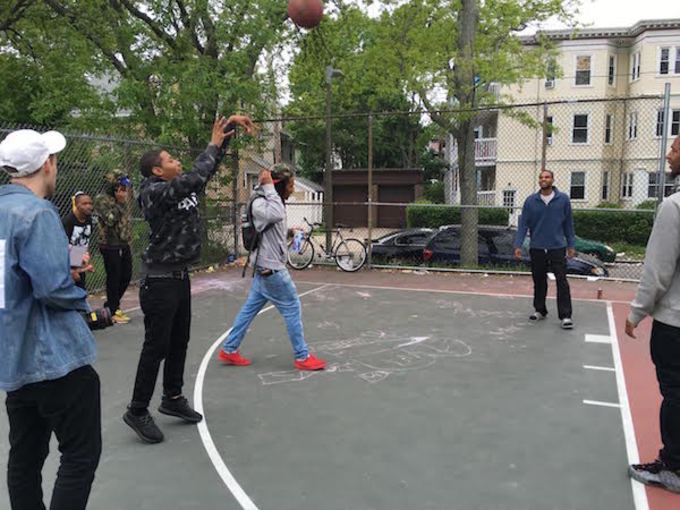 A trip through the hood brings us back to its bedrock: the courts. The section of Boston that inspired Suffolk County, a name that represents a region far larger than Fields Corner, is as much an aura comprised of successes, failures, and brotherhood as it is a physical space. To Stizz, there’s no place more important than Gucci Park, where so many relationships were forged. It’s where he and his friends would gather when trouble brewed and it’s where they’d regroup when the storms passed.

Stizz tries not to dwell on the successes of Suffolk County, even as he immerses himself in the spots that brought it to life. The fruits of his labor have made court attendance a choice. It’s no longer a necessity, but the potential for forward progress to stall isn’t lost on him. There’s not exactly a blueprint in Boston that hip-hop artists can look to as a means of avoiding mistakes. “I just thank God for all the blessings he’s given me. I don’t want to blow this opportunity, so it’s all about work. That’s what it always comes down to: I should be working.”

Since 2014, working has meant a studio session with Roy from Spare Monkey Studios—a staple in the Boston scene who met Stizz through friend and collaborator Michael Christmas.

“He’s the first person who really believed in me. He recorded every single song. He gave me the spot to really build a sound. We built the Suffolk County sound together, it’s his sound as much as it is mine. That’s when I feel most comfortable recording. He taught me how to use my voice, man. My songs were trash at one point. We kept working together until we got there. There’d be no Stizz without him, without anyone on my team.”

Another key player in Stizz’s team, Ian Goodwin, arrives at the courts after we finish our tour. He wants to photograph Big Leano and run a test round for the artwork of MONDA, Stizz’s sophomore tape. If Suffolk County was an ode to the place that birthed him, MONDA is in memory of one of the area’s natives, a tribute to a young boy who recently lost a fight with cancer. Stizz was close to the departed and had the chance to tell him that the Suffolk County follow-up would be named in his honor before he passed.

Stizz rolls up his sleeve and reveals a fresh tattoo that covers the bulk of his forearm. The ink, still fresh and peeling in spots, plays a key role in the cover art for the upcoming release. Goodwin, who has shot every Stizz video to date, snaps pictures after everyone takes a break from heaving 3s. The image—Stizz standing on the court with his best friends behind him—is a fitting continuation of his visuals, which collectively work to peel back layer after layer of a bubble that’s shrouded Boston rap from the rest of the world for so long.

A cloudy afternoon in Cousin Stizz’s Suffolk County confirms one thing, if nothing else: whether the camera’s rolling makes no difference. Fields Corner is Fields Corner, and its people are behind him. Time will tell if the rest of the city follows suit—so far so good.

Cousin Stizz is hitting the road this summer. Tickets go on sale Monday. 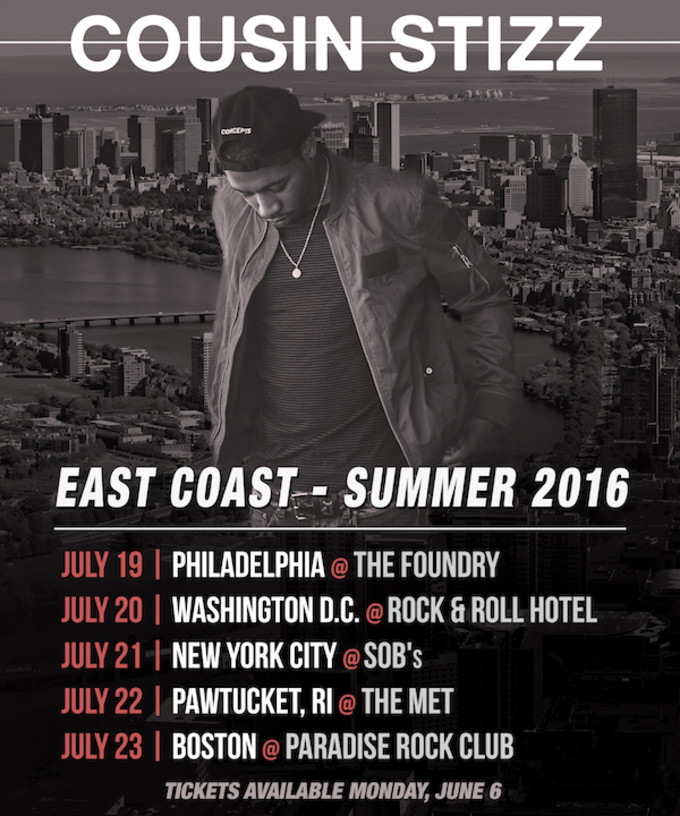