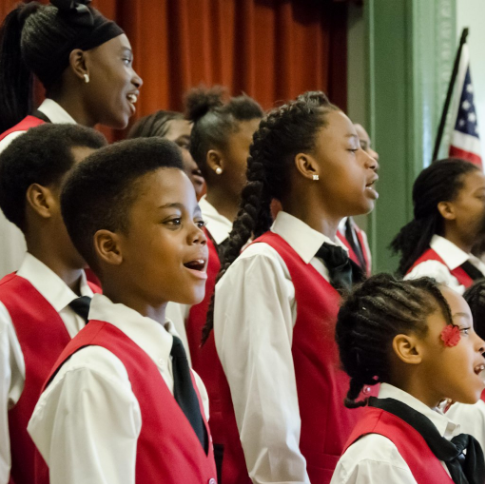 This past Friday Chance The Rapper released his highly anticipated mixtape Coloring Book. The 14-track project features guest appearances from Kanye West, Future, Justin Bieber, Kirk Franklin, Lil Wayne, and Young Thug (among many others), but there’s one in particular that stands out on the very beginning of the tape—the Chicago Children’s Choir.

Formed during the Civil Rights Movement in 1956, the Chicago Children’s Choir serves more than 4,000 children annually throughout several neighborhoods in the city, enlisting adolescents aged eight to 18 into the organization. The choir has traveled across the world performing for everyone from the Dalai Lama and First Lady Michelle Obama to Quincy Jones and Beyonce. Now, the institution has worked with the one and only Chancelor Bennett.

A collaboration between the Chicago Children’s Choir and Chance The Rapper was inevitable—the latter attended Jones Prep College alongside some of the organization’s alumni (Jamila Woods, who’s contributed to Coloring Book and Surf, is an alumna). But it wouldn’t be until Josephine Lee, the Choir’s President and Artistic Director, met Chance after a Chicago Metro performance four years ago, that the idea would start to take shape.

“We met backstage and I said whenever you want to work with the Chicago Children’s Choir, let me know,” Lee said. “And his manager Pat Corcoran was like, ‘Yeah, let’s make that happen.’” Nothing would come of the meeting until recently, when members of the choir got in touch with Chance’s music director Peter Cottontale and backed Chance during a performance at the Chicago Theater.

“Peter and I got connected and he said, ‘It’d be really great if the kids were featured on some of the tracks for the mixtape, which will drop in the next three weeks.’ He asked if we could get in the studio,” Lee explains. She selected 15 singers (including alumni Woods, Isaiah Robinson, and Vasil Garvanliev) from the choir’s top ensemble Voice of Chicago, and accompanied them to the studio to work with Chance.

The kids were super excited and nervous to see him. He’s a rockstar. But then they saw him react to their take.

Ultimately, the group’s contributions made it onto three of Coloring Book’s 14 tracks: opener “All We Got” alongside Kanye West, “How Great,” and “Finish Line / Drown.” “The kids were super excited and nervous to see him. He’s a rockstar,” Lee said. “But then they saw him react to their take. They sang a moment of ‘How’s Great,’ and seeing his response through the glass, it was so sweet.”

Collaborating with the Chicago Children’s Choir is a testament to Chance supporting the city’s ever-growing artistic scene. From working with fellow Chicago artists such as BJ the Chicago Kid, Kanye, Saba, and Vic Mensa, as well as hosting Open Mike events and raising money for the city’s homeless, Chance is using his platform to better his community in more ways than one.

“He’s spotlighting Chicago and staying independent, while inspiring children and telling them, ‘You can do it too,’” Lee said. “His music is happy and hopeful, and we need more of that.”

Chance The RapperPigeons And Planes
Newsletter