Around a week ago, Stitches met face to face with the Game, and suffice to say, things got pretty ugly. After showing up at a Miami club where the Game was he was denied entry, so he waited outside so he could confront the Game. As soon as the Game made his way outside, his manager knocked out Stitches with a single punch. Stitches was also arrested for resisting an officer, marijuana possession, and outstanding warrants. In other words, he had a pretty shitty week.

Now, things seem to have gotten worse, as footage of the rapper getting jumped by his own friends has emerged via WorldStarHipHop. Watch footage of the altercation above, and read what Stitches had to say about the situation on Instagram below.

Yea yea people are going to talk shit like they always do but let you get jumped by ur own friends which u have no hatred towards and let’s see how surprised and shocked ur going to react. At the moment, you don’t know and ur mind can’t understand what is happening ur instinct is to cover up and protect ur self and get away from what’s happening. Then reality hits you. This isn’t about being hard this is about this is about betrayal, and the footage shows it. With that in mind, I want to thank my fans for the support, love and back up thru this whole mess. I won’t let you down, LETS MAKE SOME MUSIC!!!. Fuck the bullshit . This making me more money . Sometime the person you’ll take a bullet for is the one behind the trigger . Smh 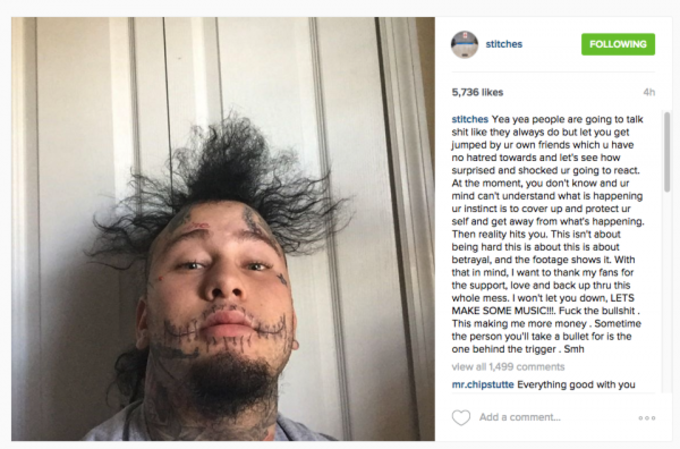