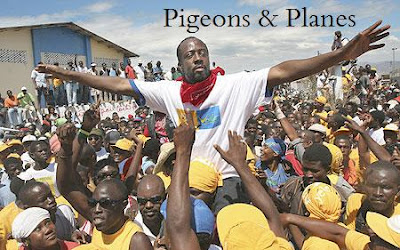 Wyclef gets some help from Timbaland. Only listened once so far but it sounds tight.

Sidenote: Still trying to find a good balance for P&P. I love hip hop, but I also love a lot of other genres. It’s hard to have a balanced blog of new music because the hip hop industry goes so hard. I still don’t understand it. I’m sure some people would say hip hop is just easier/less time consuming to make, but I don’t buy that. I’ve said it before… I don’t understand why other genres don’t put out mixtapes, and why they don’t just pick up their instruments, jam out, lay down some freestyle vocals. I’d love to hear it, and I think it would be great promotion.

Anyways, as much as I love hip hop, I don’t want P&P to fall into the category of ‘hip hop blog’, cause that’s what looks like at times. I’m gonna be slacking for the next week while I’m out of town, but when I come back I’m gonna make an effort to balance this shit out a little more. Doesn’t mean I’m gonna stop posting any hip hop, so don’t worry. Alright, now I gotta get some sleep so I can wake up go to the airport. Peace.