DJ Khaled’s Major Key album has plenty of noteworthy tracks, but there was one song that the internet went especially crazy for: “Nas Album Done.”

The song, which appropriately featured the NYC rapper, set social media on fire for two reasons: First, it suggested Nas’ next album was completed (and hopefully dropping soon); and second, it was musically on point—thanks in large part to the Fugees’ “Fu-Gee-La” sample, which, according to Nas, was all DJ Khaled’s idea.

“He knew exactly what he wanted. He had a couple of ideas, but the one we put out, that was the one he really wanted,” Nas told Complex earlier this month. “[…]I texted Ms. Lauryn Hill to ask her if she was cool, she said she was cool. She signed off on it, she gave me the approval. […] I just wanted to get her blessing and we were good.”

DJ Khaled also wrote a special letter to The Fugees that he shared on Instagram, breaking down the backstory of how he cleared the sample and why The Fugees was such a huge inspiration to him.

#letterTOtheFugees I remember the 1st time I heard the angelic voice of Lauryn Hill singing Ooooh La La La...It was like a voice from heaven. Alongside the genius musician/artist Wyclef and Pras they formed the iconic and one of my favorite groups The Fugees. The Fugees pushed the culture forward and was an inspiration to me as a fan of great music and an inspiration to this day. Dj Khaled feat @nas title of the song is (Nas Album Done! )Just the title alone let's you know it's serious!! And trust me it's serious!!! So I'd like to extend my tremendous appreciation to The Fugees for giving me their blessing with Fu gee La. To Ms. Lauryn Hill I want to say thank you so very much for allowing me to create Nas Album Done utilizing your angelic voice that we sample from fu gee la Thank you for blessing me and fan luv and the millions of fans of yours and The Fugees and music fans world wide. Ms HILL I also want tell u not only am I a huge fan I play the song ZION to my son that's in my queens belly ! I want my son to hear and feel your powerful amazing iconic voice and the amazing love coming from that song ! if I could sing that's the song I would sing to my son so I play it every chance to my son in my queens belly🙏🏽 .. To Wyclef my brother, thank you for always seeing my vision and going out your way to help make this possible. You said it best "We use to be number 10!!!! Now we permanent at 1!!!!!" Thank you for giving me your blessing. Thank u for being my brother we came along way !! I will always remember me u at FULLY LOADED in Jamaica we made history !!!!! To my brother Pras, I seen you the other day pullin off in the wraith!!!! You made time for me and came to the studio to catch a vibe. I appreciate you so much. Thank you for giving me your blessing. I appreciate that!!! Bless up!! I wrote this letter to show u my appreciation for clearing the sample for my rec wit @nas #NASALBUMDONE🙏🏽🔑🔑🔑🙏🏽. #MAJOR🔑 #JULY29 @wethebestmusic 🙏🏽🔑🦁🙏🏽. Oh yeah I'll never forget the show wit all y'all performing at the cameo in Miami wow it was historic !! #MIAMI!!! The promoter was humble lion ! @wyclefjean @ms_laurynhill @prasmichel

Apparently, Hill was more than just “good”; in fact, she seemed completely honored.

On Saturday, the Fugees member sent out a heartfelt note to Khaled on her Apple Connect page, thanking him for his acknowledgement. She said “Fu-Gee-La,” which was featured on The Score, was a special song for her and the rest of the group’s members. She also thanked Khaled and Nas for “blessing up the chune” more than two decades after it was released.

You can read her note below. 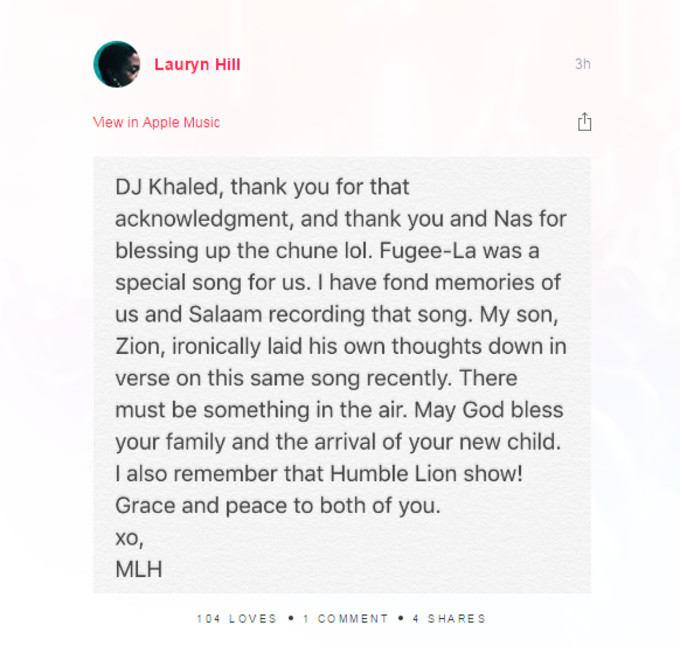