When many people think of Under Armour, that motto is the first thing that pops into their head. But when Sonya Curry, the mother of Stephen Curry, the Golden State Warriors do-everything guard, first met with executives from Under Armour, she didn’t care about protecting a house. She wanted to know if the brand could protect her son.

Sitting in a hotel room in Stephen’s hometown of Charlotte, North Carolina, as representatives from UA and Curry’s team were getting to know each other, Sonya looked right at Under Armour vice president Josh Rattet and asked point blank, “Can you keep my son safe?”

Rattet knew that Stephen and his family were trying to suss out Under Armour. The company was at an inflection point. Even though the Baltimore-based brand had been making footwear for nearly a decade it was still thought of in some circles as only an apparel company. Partnering with Curry was a chance to cement its legitimacy in basketball.

“We don’t enter any category to be No. 2,” Rattet says. “This was a real opportunity for us to put our stamp [in basketball] and say we’re here for the long term.”

“A lot of people questioned my decision because Under Armour Basketball was up-and-coming, but I saw the potential,” Curry says.

Under Armour had amassed an army of talent located around the globe—designers, engineers, quality-control teams—capable of making world-class sneakers that performed on the highest levels. When that army focused on creating a signature sneaker for a player as versatile as Curry, it brought out the big guns, utilizing advanced technology, materials, and designs.

The result is the Under Armour Curry One, and any remaining doubters need look no further than the ridiculous move Curry dropped in his new kicks against the Los Angeles Clippers in early March, dribbling between his legs and behind his back through a sea of defenders before draining an impossible three. 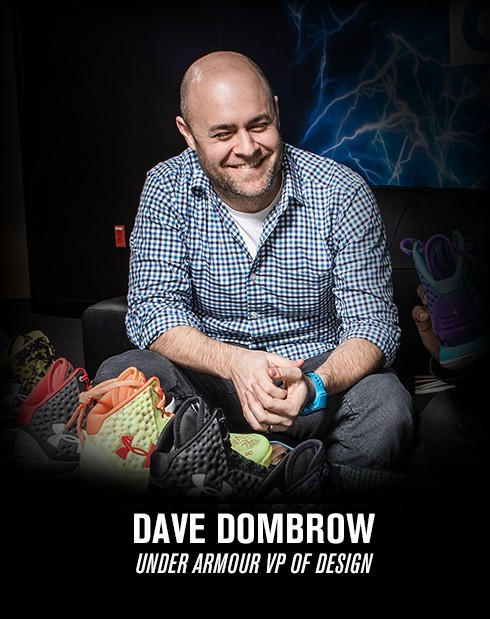 That meeting in Charlotte was more of a get-to-know-you affair. It wasn’t until Dave Dombrow, Under Armour’s vice president of design, and Ron Johnson, a senior product line manager for basketball footwear, visited Curry’s home outside of Oakland that the Curry One truly began to take shape.

A meeting that was supposed to last just a couple of hours stretched to six. The Under Armour team ended up staying for dinner, a memorable feast of gourmet appetizers and flatbread pizzas prepared by Curry’s wife, Ayesha Curry.

Aside from filling his stomach, Dombrow also filled his head with ideas as he tried to soak in as much information as he could about Curry, from his style to his cars to his hobbies. (Word to the wise, don’t play golf against Curry unless you’re looking to take an L.) Dombrow talked to family members and friends to get their insights. All of this helped him get a better sense of Stephen Curry the man that he could then incorporate into the sneaker.

“[Stephen] is the instigator of the story, then we start to write the story and he fills it back in,” Dombrow says. “It is a collaborative process the whole way through.”

“You get a lot of different perspectives and you start to shape the product in a way that incorporates all the different aspects,” Johnson adds. “This guy is much more than a basketball player. I think that’s what the world is seeing now.”

The Under Armour team had already learned a lot from Curry’s experience in previous models like the Anatomix Spawn and the Clutchfit Drive.

“He was so articulate about his needs, even on the past shoes,” Johnson says. “So by the time we were working on the Curry One we already had some best practices in place.”

For Curry, the top priority above all others—above looks, above everything—was performance. And not just for him. Curry made it clear that not only did he want a shoe that worked for him, but one that young ballplayers could have a great experience in as well.

Not that Curry didn’t have opinions about design. At that first meeting at his house, Curry was wearing a pair of SpeedForm RC running shoes, which have a distinct unibody look. He preferred a simple and clean design which hadn’t really been seen in a basketball shoe. Over the course of subsequent meetings, the Under Armour team presented Curry with prototypes and renderings. At one point, there were two variations of the shoe and Curry led the push for his favorite.

“He was really guiding the direction of the shoe on a macro level,” Dombrow says. “We’ve worked with a number of athletes and it’s rare that somebody is so articulate that we partner this much to follow their vision.”

“He didn’t want ‘me too’ stuff,” Rattet remembers. “He wanted stuff that was unique and futuristic and innovative, and that had never been done before.”

The Future Is Now

Doing something that has never been done before is never easy. It’s especially challenging when you’re trying to build a sneaker that addresses the needs of a basketball player that does so many things.

The Curry One required major advancements in cushioning and materials. It also needed to pass the “squeak test,” as Curry stubs each of his feet when he hits the floor. (“If he’s not hearing ‘squeak’ as soon as he steps on the court, it’s not good enough,” Johnson says.)

A perfect storm led to finding the right cushioning. Prior to partnering with Curry, Under Armour had been developing a new compound in partnership with Dow Chemical to be incorporated into other shoes, not just basketball kicks, but it happened to be exactly what Curry was looking for.

“If he slows down and pulls up for a jumper, it’s going to be nice and plush,” Johnson says. “But if he’s pump faking and about to blow past somebody, it’s going to immediately become responsive and a little bit firmer.”

As challenging as it was to develop a new cushioning system, it paled in comparison to what it took to develop a material for the upper that could support Curry and flow with him at the same time.

“We obsess on materials,” Dombrow says. “It’s in our DNA going back to the first shirt that the company was founded on.”

The Anafoam material used on the Curry One is the mashup of a mesh that had been used in Under Armour apparel with a foam used in their footwear. The two are co-molded together to form a textile that offers exceptional support without limiting mobility in any way, as anyone who has watched Curry play this season can attest.

Getting the Anafoam exactly right required hundreds of different trials, with minute adjustments to thickness, foam compounds, and even textile structures. Early versions were too stiff, but eventually the team dialed it in to Curry’s delight.

“The first time he saw one of the early prototypes, he was really excited by it,” Dombrow recalls.

All of the innovations add up to a shoe that is greater than the sum of its parts. It might just be the best-fitting basketball sneaker ever. Under Armour designers didn’t just pay attention to the outside of the shoe, they focused on what was inside as well. The heel panel wraps around the Achilles and fills in the gaps so that the tendon is protected. The heel counter is external to lock down the back of the foot, while still allowing the Anafoam to shroud the heel and provide additional support.

“Every little millimeter [of the foam] is considered,” Dombrow says. “It all goes back to a player’s game and how much support we want when Stephen’s cutting and pushing off.” 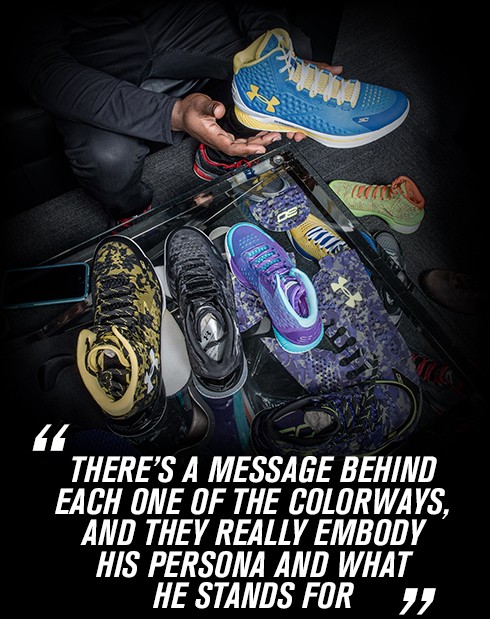 From Dark Matter to Candy Reign

While Curry’s game is reflected in the technology of the Curry One, his life story is told in the various colorways.

“There’s a message behind each one of the colorways, and they really embody his persona and what he stands for,” Rattet says. “Even down to the lace tips, there’s special details that are very personal to him.”

The Curry One officially launched at NBA All-Star Weekend, and he used the game to debut a colorway called Dark Matter, named after a material in space that cannot be quantified, much like Curry’s game. The dark purple print has a camouflage-like appearance that also pops up in other versions of the shoe. The lace tip on one shoe says 1988, the year Curry was born, while the other lace says 1938, the year dark matter was discovered.

For Curry’s home and away colorways he wanted to pay homage to Dub Nation and the Warriors. The blue-and-yellow version has been flying off shelves, which is a testament to just how strong Curry’s following is in The Bay. Inside the tongue is the phrase, “I can do all things,” part of a biblical verse that Curry often writes on the outside of his shoes during games. His unselfish, team-first approach comes through on the laces which are printed with “MMTB,” an acronym for Make My Team Better, and “Lead.”

One of the more attention-grabbing versions is Candy Reign, and it was born out of the Under Armour team discovering Curry’s sweet tooth. In case you ever visit, there is literally candy stashed throughout his house.

“If you do something good, he likes to reward you,” Johnson says. “When Dave showed up with the first rendering of this shoe, [Stephen] pulled out his personal collection of candy and shared it with us.”

Curry also got to give a shout out to his dad, Del Curry, who played 16 seasons in the NBA, including 10 with the Charlotte Hornets. The father-to-son colorway features the Hornets purple and teal and has “30/30” on the front of the tongue to represent Stephen and Dell’s shared jersey number, and each player’s three-point average is printed on the inside.

Those storytelling elements are woven throughout each colorway, from the Underdog version that references all the knocks on Curry coming out of Davidson College, to the MI:30, which is a nod to the secret agent persona that Curry takes on come playoff time.

But there is still one colorway that’s missing—for now.

“Hopefully there will be a championship colorway,” Curry says. “It’s something that we’re working for.”

Development is already well underway on Curry’s second signature shoe. Without giving too much away, Rattet acknowledges, “It’s a complete evolution of his current shoe. It’s a groundbreaking product.”

And the innovations that the Curry One pioneered are starting to make their way into other Under Armour products. The Charged Cushioning has potential applications in running shoes, and the adaptable fit that Anafoam provides could also work in football and baseball footwear.

But last summer, at the Stephen Curry Select Camp in San Francisco, no one was thinking that far down the road. Johnson delivered some finished product and was walking through some of the different colorways, and Curry couldn’t contain his excitement. He was running around showing the different shoes to his friends and family.

“You always remember that guy that you grew up watching and wanting to get their shoe,” Curry says. “To be on the other side of that is a dream come true.”

In the middle of Johnson’s run-through, Sonya Curry stopped him. “Thank you,” she said in a manner that was clearly heartfelt. She had asked the team at Under Armour to keep her son safe, and they had done that. They’d also done so much more.