RELATED: What the Best Men’s Tennis Players Will Wear Next Week at the U.S. Open
RELATED: Nike Debuts the Tech Pack Fall 2014 Collection With Some Help Form Serena, Rafael Nadal, and More 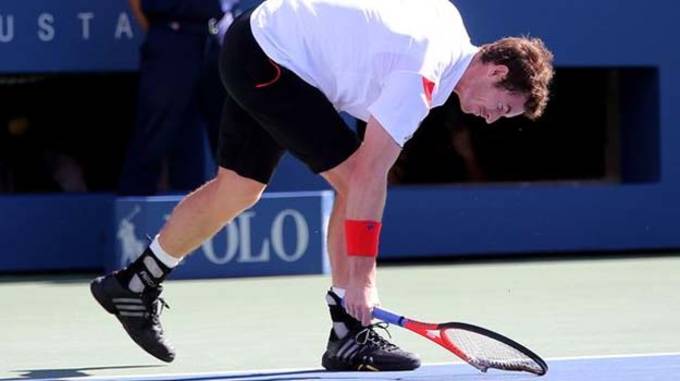 Andy Murray Chokes in 2013 US Open

With a win in this match, Murray would move on to a rematch of last years US Open final with opponent Novak Djokovic. Instead, Stanislas Wawrinka would defer this rematch with a huge upset over Murray. Hence the smashed racket.

Serena Williams Down and Out

After suffering a back spasm in the second set, Serena wouldn’t be the same for the rest of the match. This match would make Sloane Stephens famous.

A usually cool tempered Federer lost his cool in Miami against Novak Djokovic. Federer would lose the decider 4-0, making it his third time that season getting blown out in a final set.

A frustrated Roddick made an early departure from the event with a loss from No. - 31 ranked Kevin Anderson. As the winner of this event in 2008, a disappointed Roddick would not reclaim his title in 2011.

McEnroe was known for his short temper just as much as he was for his tennis skills. Just from looking at the image, it is hard to believe that he won this match. You cannot be serious.

Novak Djokovic Rallies Back for the Win

The match was almost even the entire game, and Djokovic would rally back from a five-point deficit in the final set. Winning wasn’t an easy task as you can see from the smashed racket.

Baghdatis might hold the record for rackets smashed in a single match. The first was could have been expected, the next one not so much. The next two never left their plastic wraps.

Another Day Another Racket Smashed for Marat Safin

Safin breaks a lot of rackets. It is estimated that he has smashed 50 in a singe season and upwards to 400 rackets in his career. This was just another day at the office.

Vera Zvonareva Breaks, Bites, and Kicks Her Racket in Charleston

Opponent Samantha Stosur led the match quickly winning to sets early. Zvonareva rallied back, but couldn’t come out with the win, smashing and biting her racket in frustration. Check out a compilation of Vera's meltdowns below.

Fernando Gonzalez Breaks His Racket in Half in Rome

Above you can see that Gonzalez snapped his racket in half over his knee. Below you can catch the entire play.


Argentina’s Del Potro would lose his cool in the first set, losing in a tiebreaker. He would end up defeating his opponent Giles Muller.

Novak Djokovic Shows His Hate for the Clay

After losing the first set, Djokovic smashes his racket across the clay.

Andy Roddick Asking For It

Opponent Flavio would upset Roddick in the first round. Check out Andy asking for his warning below.

Andre Agassi Shows Off His “Passion” in DC

Andrea Stoppini from Italy would upset Andre in Washington DC. Agassi had this to say in his post-game interview, “Breaking a racket for me has always been a sign of caring about something that you can’t quite get over the hump with… I was very frustrated.”

Xavier Malisse Pulls a “Djokovic” Out On the Clay

Malisse throws his racket down to the ground in a match against Andy Murray. This is nothing compared to his tantrum in the 2005 Miami Masters, watch it below.

Donald Young Gets Beat By Lacko

Donald Young shows his frustration against opponent Lukas Lacko of Slovakia. Young would only win one out of four sets in his defeat.

Mikhail Youzhny Bleeds for the Game

Mikhail Youzhny breaks his racket over his own face in reaction to losing a point. Judging by the blood, this wasn’t his best match. Watch the entire play below.

It wasn’t a memorable McEnroe match unless there was a tantrum and broken rackets. McEnroe didn’t agree with the referee’s call, see how he reacted below.

Paire argued with the referee and umpire, explaining that he would’ve been treated better if he was a top five ranked player. Paire would be eliminated this match.

Why? Rafael Nadal defeats Wawrinka in French Open quarterfinals. Wawarinka would then throw his racket to a ball boy in his loss.

RELATED: The Rackets Used By The 10 Best Men’s Singles Tennis Players Today
RELATED: The Evolution of the Tennis Racket