With Halloween almost here, timelines will soon be flooded with celebrity costumes and, hopefully, no blackface. But one establishment is going out of its way to get into the fall spirit by dressing up as a fictional restaurant from the Eddie Murphy comedy Coming to America.

Redeye Chicago reports that Chicago restaurant the Wiener’s Circle has outfitted their entire look to replicate McDowell’s, which poked fun at its extreme similarities to McDonald’s in the movie (eg: Big Mick vs Big Mac, golden arcs vs golden arches, etc).

“Who’s ever heard of a restaurant dressing up for Halloween?” creative director Brendan Kelly asked. “We’re bringing McDowell’s, from the servers, the cashiers to the exterior.” They're going full out with servers in plaid McDowell’s uniforms, currency from the bank of Zamunda (Prince Akeem Joffer’s native country) on the cash register and a sign that says it is no longer serving all-day breakfast.

Additional gags include a life-sized cutout of LeBron James (who recently split from McDonald’s) with a McDowell’s logo pasted on his jersey, and their signature chocolate shake renamed “Sexual Chocolate” for the occasion. 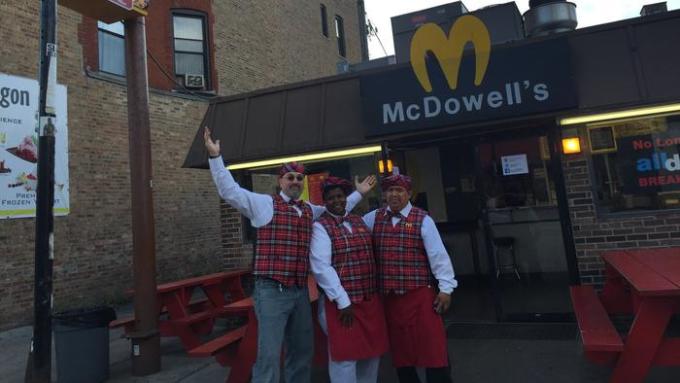