Nick Kroll won't be jumping any sharks for your entertainment. In early December, the comedian announced that the upcoming third season of his Comedy Central sketch show, Kroll Show, would be the last. With story lines that have developed and enmeshed over three seasons coming to a natural conclusion, he felt it best to move on, "maintaining the purity" of his endeavor, rather than "stringing out more seasons" with new, wholly unrelated plots featuring beloved characters like Bobby Bottleservice and Liz G., or with entirely new characters that viewers have no attachment to. Slow clap for creative integrity, please.

Complex recently caught up with Kroll—who highly recommends that viewers watch the series in sequence so they understand all the jokes (you can catch up with the Kroll Show Seasons 1 and 2 DVD or stream episodes on Amazon or Hulu)—and spoke about the future of his characters, what it's been like running a show and collaborating with his friends, and whether he's as concerned about the purity of his other hit show, The League. And after the interview, check out an exclusive clip from Kroll Show's final season.

What were your immediate feelings when you realized that season three should be the Kroll Show's logical conclusion?
It’s a combination of excitement and doing the decision I think is smart and then second guessing it and feeling like I’d made a terrible mistake. But then the subsequent thing of, "No, no, no, that’s what you wanted to do." Whenever you do anything that feels like a major move, I look at it like a haircut, when you’re like, “I really need to get a haircut,” and then you get a haircut and you’re like, "Agh, why did I get a haircut? ‘Cause I wanted a haircut. Oh, OK."

Were there people you spoke to when you first thought of this who helped confirm that you weren’t out of your mind?
Oh yeah. I tend to talk through my feelings. Shout out to all the Complex heads out there who talk through their feelings. People were surprised but then also supportive. As I talked through what my thinking was it made sense to people. It wasn’t a decision made (1) in a bubble, or (2) frantically.

Was putting Kroll Show to bed intended to free you up to do another project with Comedy Central or another network?
No, it was more like freeing up my mental space to start thinking about new stuff. It’s the most fun thing I’ve ever done but it also took up a lot of my time but also my brain space. So creatively, if you speak to most creative people, they’ll tell you, you have to put some things to bed if you want to go make other stuff. Your brain—at least my brain—is not that big. I think it measured the size of a baseball. Most people’s are more like the size of a softball. I got a baseball-size brain. So, I don’t know what I’m gonna do next. I have a ton of ideas and I’m open to collaborating with people. I just was ready to figure out something new.

Speaking of collaborations, Kroll Show allowed you to work with so many of your friends in comedy. Do you think you’ll ever have this kind of opportunity again and how do you think you’ll look back on this experience?
I hope that I keep working with everybody on this show. That’s the scariest part of this, is not ending the show per se but being like, I hope that I get to keep working with all the people that I worked with on the show, because they’re funny—both writers and actors and directors, down to our props guys and our DPs and all the people that got to work on the show, especially this last season, because it was such a well-oiled machine and such a good vibe on set. The goal is to find people who are very good at what they do, and who are also a pleasure to spend an insane amount of time with. I know I have that on this show and I hope that it’s not the last time that I get to work with these folks.

You mentioned the burden of having so much to do on a show that’s yours. How involved do you see yourself being on a show?
I assume that I’ll do something like this again. I enjoy producing and creating, and I like being in charge. It’s partly like, when you’re just an actor, you’re at the mercy of others, of others casting you, writing things for you, which can be fun if you’re lucky enough to be put on an amazing show or in an amazing movie with a great team of people, but it’s a lot harder. And I’m not confident enough to count on that, so in creating it gives you the ability to control the most variables possible.

Do you feel like Kroll Show has set you up so you can run a show whenever you want?
I’m proud of the work that we did and my hope is that everyone who worked on Kroll Show, it will be a credit that people will be like, "Oh, you worked on that show? The word on that show was that it was good." So again, it’s like, if you ask the majority of comedians and actor/writers think, "Everyone will soon realize that I’m a fraud!" The jig is about to be up.

The goal for me is always to do things that will hopefully help you work with the people that you want to work with going forward, like that would hire you or collaborate with you or whatever. We’ll see. I feel like the people who worked on the show had a good time and would hopefully want to keep working with me in some capacity, and I feel confident that they’re all gonna go do cool stuff and hopefully I’ll get to be on their shit.

You’ve said you might return to these characters later on. You completed arcs for them, but were there situations and places you have in mind for them but that didn’t make sense for the show? Do you have any ideas?
Not at this particular moment. If I felt like I had ideas, the big idea for enough of those characters, then I would continue to do the show. But I am open to whatever. As things appear. Or if I’m struck with something. I wish I had a funnier, better answer, but the truth is I loved playing these characters, I’m not sick of playing them, but I just felt like, at the moment I’d told the stories I wanted to tell with them. 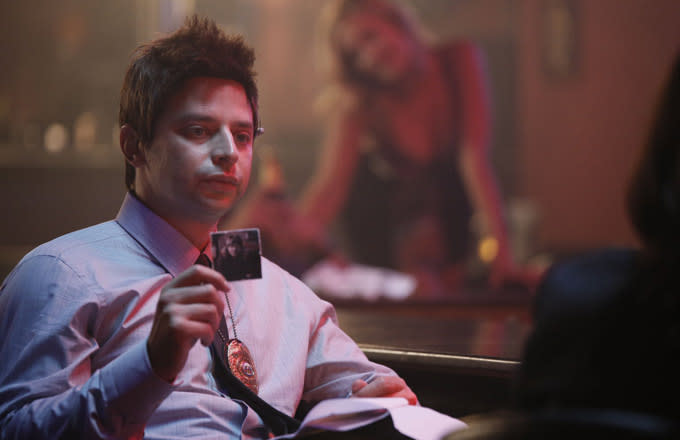 Is there a particular character or costume that you’re going to miss getting into more than others?
I’m not going to miss getting dressed as Liz because being a woman is exhausting. Shout out to all the ladies out there. Men don’t truly realize how hard it is to be a woman. But it’s fun. Once you go through makeup and get into the wardrobe—and we had such great people working in makeup and wardrobe—it made it fun and easy to get into character. Once I got into wardrobe, I felt like, I can do any of them because now I feel like them. Once me and [John] Mulaney get dressed up like George and Gil, or I get into Bobby, or I’m hanging with [Jon] Daly dressed like Rich Dicks, you just fall right into the character and it’s super fun.

You’ve incorporated these characters into your standup. Could you see yourself doing a live show with them?
I’m open to whatever. Who knows. Martin Short, who is the coolest guy around, takes his live show on the road and does Jiminy Glick and other characters and has figured out how he can go from character to character, and that’s awesome. Who doesn’t like seeing Jiminy Glick? He’s the funniest character ever. Jiminy Glick is the funniest character ever. So I’m not opposed to that. Mulaney and I are gonna be doing "Oh, Hello" at the 92nd St. Y, which feels like the world will implode upon itself. Again, I’m open to whatever. If it feels right, if it feels fun, I don’t have any hard and fast rules about anything.

What are the most memorable responses you’ve gotten to the characters after two seasons?
My mom always feel terrible for Ref Jeff, that people aren’t nice enough to him. The best is when people who are sort of like the character I’m portraying love the character. It makes me happy. I’ve had that in various forms. Nothing pleases me more than when a Bobby Bottleservice comes up and tells me they like Bobby Bottleservice. That’s gratifying.

That takes a strong sense of self-awareness.
Or not a strong sense of self-awareness. But it is true. People do have a good sense of humor about themselves, which I don’t think everybody realizes. I have had rich dicks, Liz’s, Bobby’s all talk about how they like the sketches that seem to somehow reflect them. The only group that doesn’t seem to know about it, because they don’t have cable, are the Oh, Hello’s, the George and Gil’s of the world.

They’ll find out at the Y.
Yeah, I hope the George and Gil’s of the world will finally know about the show when we finally appear at the YMCA.

You’ve talked about maintaining the "purity" of the show, and on Kroll Show you can do that because you’re the showrunner. On a show like The League, where you’re a relatively powerless actor, is that a concern for you? Do you worry about your series lasting longer than it should and "jumping the shark"?
I had the ability on my show to say, "I feel like I’ve done the stories I wanted to do." It’s a double-edged sword. I’ve had the privilege of being in The League, and all I have to worry about is being funny and that’s it. Luckily for us, people like the show and like my character and I have to do so much less work than I do on Kroll Show. In that way it’s super fun.

But I feel like it’s with anything. I’m sure you’re writing for Complex, you’re writing this article, which you’re happy to do, but then you’ve got some book or screenplay that you’re working on that’s important to you—not that The League hasn’t been important to me, but when you have everything invested in it, of your time and energy and your name, it just feels different. It’s not necessarily better or worse. But the thing with The League, the cast and creators are such funny, talented people that it’s been a pleasing show to work on, where we feel like a family.

Justin Monroe is a Complex executive editor and lover of sketchiness. He tweets here.