It was in my 10th or so hour of playing WWE 2K15 that I realized something: this game is the Dolph Ziggler of wrestling video games. It's clearly full of potential and fan favorite touches, but its presentation and questionable choices hold it back from being a true main eventer. Unfortunately, this is not the end-all be-all wrestling simulator that fans have been thirsting for, but it comes close in key places. If 2K Games can iron out the flaws, there's no reason it can't become the World Heavyweight Champion next year.

First off, the good: the gameplay updates that WWE 2K15 received are excellent. The much-debated chain grappling, in which players would engage in quick-time events at the start of the match, is a pleasant little mini game that affects roughly 5% of each match. The rock/paper/scissors element of it is frustrating but, again, it’s not a huge deal. Also, you can turn them off if you’d like, so there’s that.

The game seems slower this year, which isn’t a bad thing: every hit connects with power, and pulling off a cool move feels better this year. Reversals have had their window shrunk, so if you want to turn that clothesline into an armbar DDT, you’re going to need to nail the button press almost exactly. It’s rewarding but new players might get frustrated as lower-level wrestlers beat them to the punch every time. Another great addition is the stamina meter, which stops you from spamming finishers when you’ve been in a 20-minute war; you’ll need to wait to build up juice before landing that F5. 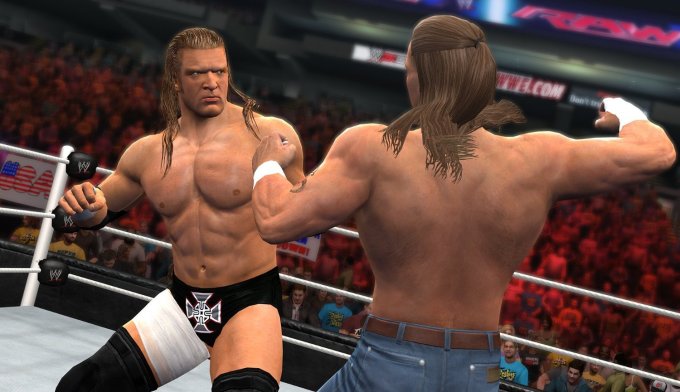 It’s a good thing that the game plays well, because the modes are more of a mixed bag. Showcase mode is a fun if short distraction; while 2K Games has promised DLC for it, the two storylines that come with the game can be knocked out in a short amount of time. The Triple H/HBK rivalry is captured well, but personally, this was not one of my favorite periods of WWE storytelling, so the emotional connection isn’t there.

On the other hand, the Punk/Cena rivalry that the game highlights was what got me back into wrestling after a long hiatus, and it is handled marvelously. From the Pipe Bomb promo to their classic 2013 Raw match, it’s all there, right down to the rabid Chicago fan base during the iconic Money in the Bank 2011 match. This storyline does suffer from the lack of a face-scanned Punk; he looks noticeably worse than every other model in the game. Aside from that, however, it’s a nice trip down recent memory lane.

On the other hand, WWE 2K15's new MyCareer mode suffers from slow progression that keeps it from being all it can be. It’s just too repetitive to be as compelling as it should be; the NXT portion of the game is brought down by the puzzling inclusion of only five real wrestlers (2 of whom aren't even on NXT anymore, and Corey Graves being included instead of Tyler Breeze is a travesty), as the constant barrage of generically named challengers gets stale. 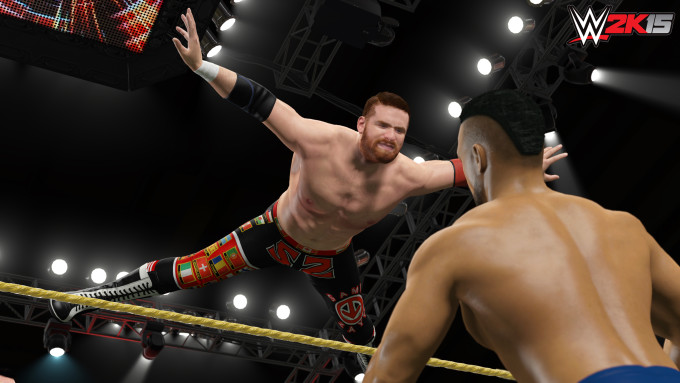 Things don’t improve once you move into the main roster, which has you chasing the title belt...and not much else. I was hoping for more rivalries, more ridiculous backstage segments, and more moments that my virtual WWE superstar would be remembered for years later. Instead, you’re stuck in midcard hell in between title chases, doing matches that real fans would tweet through during the slog that is a three-hour Raw. It would be great if these matches had consequences aside from improving your wrestler's measly rating.

The biggest problem with WWE 2K15, however, is what’s not there. As is customary for games making the leap to next-gen, there is a lot of stuff missing here, specifically when it comes to match types. While it’s not clear whether WWE made them remove matches because they’re no longer current on TV, it’s almost irresponsible that there are no niche gametypes like Inferno matches or one-on-one non-title ladder matches. Hell, there aren’t even Handicap matches, and we all know much John Cena loves overcoming the odds. 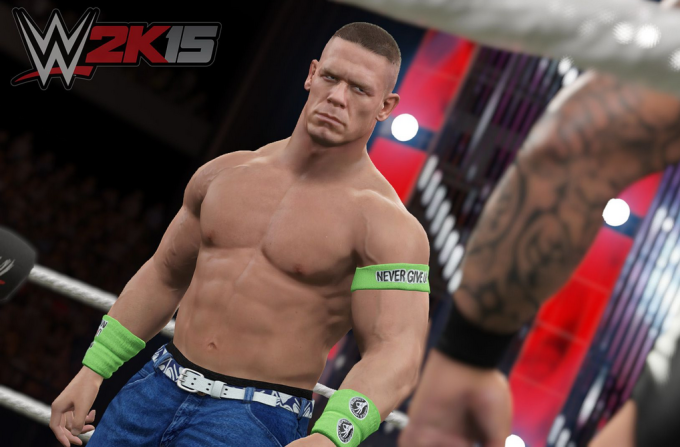 This similar lack of features extends to the roster, which clocks in at around 80 wrestlers, divas, legends, and managers. That’s less than WWE 2K14, which was supposed to be the transition year towards next-gen. Sure, some are coming via DLC, but the lack of, say, Divas favorite Paige on the box (she’s a reward for purchasing the Season Pass) is puzzling.

It’s worth noting that, graphically, the game looks greats and the wrestlers that did make the cut look phenomenal. If only real WWE cared as much about Cesaro as 2K Games does; the Swiss Superman gets the crown for most badass character in the game, as his muscles bulge not unlike his real physique, and his signature uppercuts look brutal in motion.

That’s WWE 2K15 in a nutshell: it looks and feels great, but its puzzling design choices are not what should be expected for a second outing on a new generation of consoles, and they do enough to weigh down what is a fantastically-playing game. MyCareer especially is a letdown, considering how fantastic the equivalent mode is in 2K’s flagship franchise, NBA 2K15. But when it comes down to it, this is still a good wrestling game that solves most of the complaints fans had for in-ring action. Here’s hoping that next year, they work just as hard on the action outside of the squared circle.

Luis Paez-Pumar is a news writer at Complex. He tweets here.

The Most Anticipated Video Games of 2014