Of all the franchises that Hollywood has tried to endlessly regurgitate until they choke, Teenage Mutant Ninja Turtles should be one of the easiest to dismantle and reconceive from scratch. The premise might seem too absurd to connect with mainstream audiences: four turtles are transformed into pubescent humanoid karate fighters (which isn’t quite as catchy) and live in the sewers of Manhattan under the tutelage of their frail rat master. But one of this year’s biggest hits is a movie about a talking raccoon and a sentient tree shooting their way across space, so whatever. The important thing is that the titular terrapins are freaks of nature, and are forced to live underground because their very existence would frighten the public they’ve sworn to protect.

And though they’re heroes in a half shell, they’re also tragically normal kids, cut off from anything that resembles a normal social life. Aside from intrepid reporter April O’Neil (Megan Fox) and a few assorted outcasts, the Turtles’ only connection to the world above them is through whatever errant snippets of pop culture they happen to encounter between fighting the evil Shredder (Tohoru Masamune) and his strictly uniformed league of henchmen, the Foot Clan. Leonardo, Raphael, Michelangelo, and Donatello, while always tethered to the grandness of their renaissance namesakes, are perfect reflections of the world around them. Michelangelo’s “Cowabunga!” catchphrase isn’t just a word that he picked up slinking around the streets of New York circa the late ‘80s—it’s a flimsy bit of kitsch that he hangs onto like a life raft, the only thing connecting him to life as it’s lived in the daylight. He’s like Arielle in The Little Mermaid, all spoons but no prince. Teenage Mutant Ninja Turtles should always be ready for a reboot, because the Turtles themselves are naturally defined by the present moment.

Unfortunately, that's pretty much the only thing that director Jonathan Liebesman’s Teenage Mutant Ninja Turtles gets right, and it gets it right in all the wrong ways. The film pays some quickie lip-service to recent cultural touchstones, careful not to include anything so recent that it begins to feel like a spoof (one flashback sees the Turtles watching Gwen Stefani’s “Hollaback Girl” video in a store display). But the real problem here isn’t how it references music and TV shows—it’s how Teenage Mutant Ninja Turtles is deeply informed by the worst tendencies of contemporary blockbuster cinema, looking back at the summer movie season through a funhouse mirror (minus the “fun”) that only reflects its ugliest features. 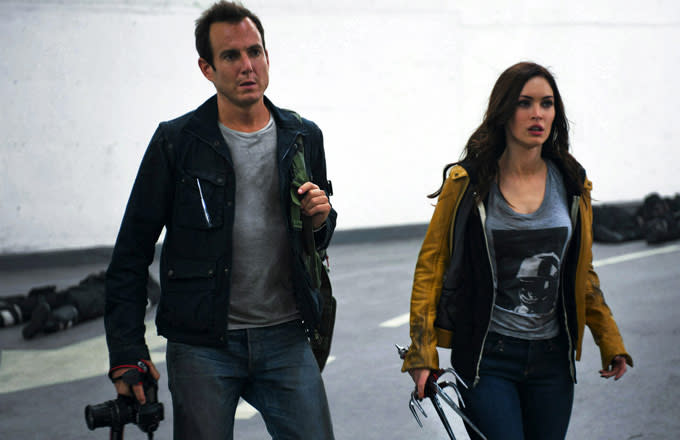 For starters, Liebsman tries to return the Turtles to their pulp comic roots by making this into one of those 'gritty' reboots, but, as is so often the case with the director (see: Battle: Los Angeles, Wrath of the Titans), he can’t commit to the choice. When the film begins, New York City is living under the oppressive toe of The Foot, the streets supposedly so unsafe that literally the only time a civilian is in any danger whatsoever is when they’re used as bait to lure the Turtles out of hiding. To crack this terrible problem, the mayor has contracted local millionaire Eric Sacks (William Fichtner) to help out by doing...something. It’s kind of unclear. But whatever it is, Sacks is definitely not gonna do it because he’s obviously pure evil (remember, he’s William Fichtner; also, he’s rocking the “Nicolas Cage in Next” look, which is never a good sign).

In the grand tradition of The Amazing Spider-Man and its beloved sequel, everything is connected in some stupid way that prevents the plot from doing anything remotely unpredictable. Sacks, it turns out, used to be lab partners with April’s father, who died in the mysterious fire that consumed their research. Many recent films have exploited the idea that inventing relationships is easier than developing them, and that announcing the shared history between characters is easier than making it matter, but few have done so with such cynical disinterest.

These flaws would be easier to overlook if the Turtles themselves radiated with any of the energy that first allowed them to flip into the mainstream. Here, the four brothers aren’t characters so much as they’re overgrown adjectives, their signature colors used as a crutch whenever the script is too lazy to identify them. There’s Donatello (the nerdy one), Michelangelo (the wacky one), Raphael (the one who looks like Bret Michaels), and Leonardo (the one who sounds like a fully adult Johnny Knoxville, because, well, he's voiced by Johnny Knoxville). They all have the musculature of The Rock, move with the unreal fluidity of Transformers, and communicate via the deeply unfunny banter of...Transformers (the hands of producer Michael Bay are all over this thing, with Liebesman exhibiting all of his boss’ volume but none of his vision). The only truly repulsive creation, however, is Splinter, who seems built from polygons left over from the ones used to create Yoda in 2002’s Attack of the Clones.

To the film’s credit, the action sequences that it scrambles between are increasingly coherent, and the last two even have moments where it’s possible to tell whom is doing what (“why” is never really on the table). The performance-captured CG allows the Turtles to do all sorts of cartoonish stuff that was impossible for their live-action predecessors, including one neat sequence where they surf down a snowy cliff.

And yet, so little of the action is motivated by the characters. Everything just happens, and none of it matters. The once-menacing villain Shredder is dropped into the script like a typo, the spikes on his armor his only points. Will Arnett shows up as April’s co-worker/love interest, but the film cares about him even less than you will. The best scene in Teenage Mutant Ninja Turtles is just the Turtles riding in an elevator, beat-boxing and being themselves. It’s the only part of the movie that understands that the Turtles aren’t just defined by the world around them, they also believe that it’s one worth saving.

David Ehrlich is the Editor-at-Large of Little White Lies and a profoundly important freelance film writer. His interests include movies about movies, the New York Rangers, and recycling the same terrible personal bio until he dies. He tweets here.