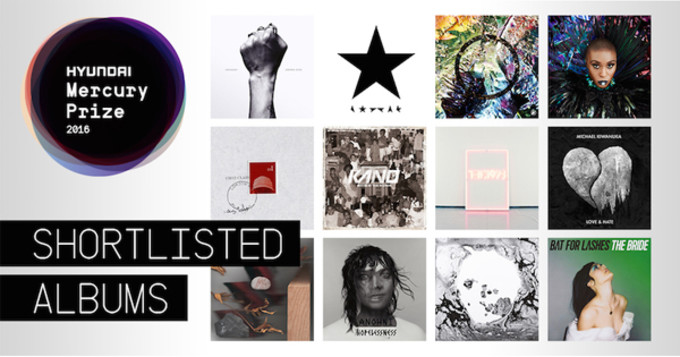 The Mercury Prize shortlist for 2016 nominees has been announced. The Hyundai Mercury Prize honors the last year of British albums, with the nominees chosen by a board of British critics and industry figures, and their list for 2016 is very strong. Including Anohni with Hopelessness, Radiohead’s A Moon Shaped Pool, David Bowie’s Blackstar, and Skepta’s Konnichiwa, there are some undoubtedly fantastic albums up for the prize this year.

The Mercury voting system is changing for 2016 to incorporate fan input, with votes from the public determining one album making the final shortlist which will include five records as chosen by the judging panel. In a statement, the judging panel said, “This is music to make sense of our unsettling times – heartfelt, angry, thoughtful and thrilling. The 2016 Hyundai Mercury Prize ‘Albums of the Year’ are marked by their musical ambitions, unexpected instrumentation and breathtaking arrangements.”

Previous winners of the award include Benjamin Clementine, James Blake, PJ Harvey, the XX, Portishead, Antony and the Johnsons, and Arctic Monkeys among many others. Check out the full shortlist below and have your say here.

Anohni: Hopelessness
Bat For Lashes: The Bride
David Bowie: Blackstar
Jamie Woon: Making Time
Kano: Made in the Manor
Laura Mvula: The Dreaming Room
Michael Kiwanuka: Love & Hate
Radiohead: A Moon Shaped Pool
Savages: Adore Life
Skepta: Konnichiwa
The 1975: I like it when you sleep, for you are so beautiful yet so unaware of it
The Comet Is Coming: Channel the Spirits