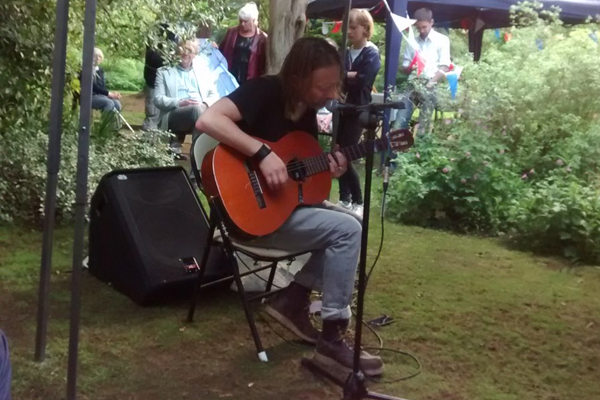 As if to incite jealousy among Radiohead fans everywhere, Thom Yorke played a quaint acoustic set in his neighbour’s garden over the weekend. A fan first alerted people of the tiny performance with a very dad text that he received via Reddit, notifying him that his dad was, “In Oxford at garden party with Suzie’s neighbours, about to hear entertainment from neighbour Tom York of Radiohead!” The fan instantly responded, as any normal Radiohead fan would do, asking his dad to “Cut off some of his hair.”

Playing “Desert Island Disk,” “No Surprises,” “Street Spirit,” “Reckoner,” and “I Might Be Wrong” among others, Thom looked pleased to be performing to such a small crowd. Playing under a gazebo and drinking red wine, a video has surfaced of him performing at the small event. It’s unclear as to how his neighbors managed to get him to play songs in the garden, but they’re certainly a lucky bunch, especially considering the songs that Thom reportedly played there. Every garden party going forward will pale in comparison to this one, so maybe don’t bother putting on any parties of your own this summer.

Watch a short video of Thom playing “Reckoner” below.