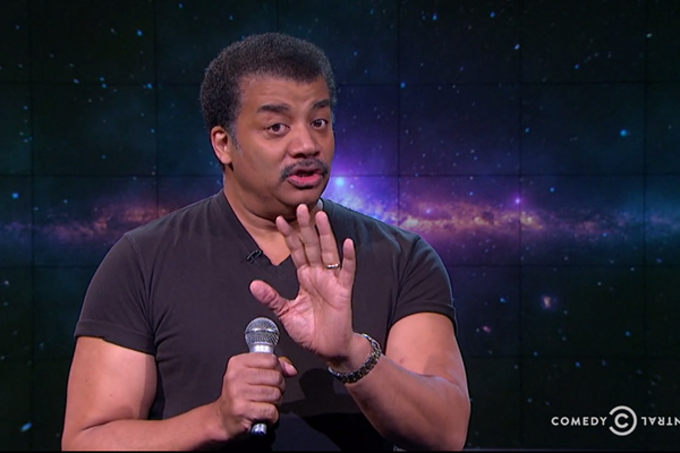 Neil deGrasse Tyson is not done with B.o.B. He joined The Nightly Show and attempted to ether B.o.B and the flat Earth claims with a monologue explaining the principles of Euclidian geometry.

B.o.B. and Neil deGrasse Tyson began their back-and-forth debate/rap beef over the Atlanta artist’s claims that the Earth was flat. Tyson corrected B.o.B.’s theories and made it clear that fans can still enjoy the rapper’s music even though he’s “five centuries regressed” in his reasoning.

B.o.B. then decided to take the beef to music by releasing “Flatline,” a song that dissed Tyson and defended his theories of the world being flat. Tyson fired back with a response diss, courtesy of his nephew Steve Tyson.

In this latest shot, Tyson explains why a tiny person on a giant curved surface, such as Earth, would perceive it as flat before taking a few more jabs at B.o.B. and claims that being wrong when you are a rapper with a large reach is “harmful to the health, the wealth, and the security of our citizenry.” He ends the monologue: “By the way, this is called gravity” as he drops the mic.

Looks like this beef is over. Watch the full episode of The Nightly Show here, Tyson’s monologue comes in at about the 10:30 mark.