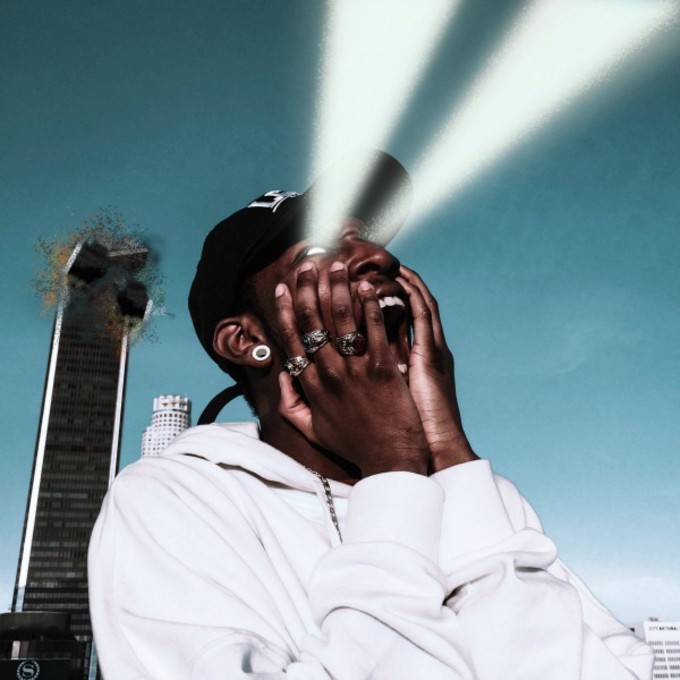 It’s a bright and sunny Saturday afternoon in Los Angeles. It’s not a hot day, but for a New Yorker escaping the November weather back home, this will do just fine. I had heard rumors of how awful L.A. traffic can be, this wasn’t one of those days—I arrived nearly a half hour early at a small sushi spot where I will meet Finding Novyon. Luckily, Novyon and his friends are just as punctual—they arrive just a few minutes after me.

Like myself, this is the first trip to L.A. for the 24-year-old rapper/producer from Minneapolis. Later that evening he will hit the stage to perform in front of a sold-out crowd at the Hollywood Palladium, ahead of Mick Jenkins and Big Sean. They’re playing as a part of Red Bull Sound Select’s 30 Days in LA concert series. At first glance, the lineup seems like an odd pairing, but Red Bull has a knack for making it work.

In a way, the lineup of that show was very similar to the track list of Novyon’s latest mixtape, #TheFoodNetwork. The project easily transitions from bouncy hits to grittier, soul-baring tracks. I sat down with Novyon to discuss his music, how he’s representing Minnesota, and working with longtime friends like Allan Kingdom.

I know your name is actually Novyon, but what’s the Finding part about? What are you trying to find?
I used to have this girlfriend, two or three years ago. When we broke up she said, “You should do yourself a favor and find yourself.” I felt like that was a big transition point in my life, because it was when I wanted to be known as an artist more so than just a rapper. It was around the time that Allan [Kingdom] told me, “You should start making beats, and you should start doing this and that for yourself, instead of just focusing on one thing in your life.”

So you rap and produce? What comes to your mind first?
I make the beat first, if it’s not coming from Travis [Gorman]. But for the most part, I just sit down and make beats. “Lots,” for example, I went home and made that beat in maybe ten minutes, just the bass line. As I was making the bass line, the lyrics just came to my head. What I’ve been doing lately is structuring the songs around my lyrics.

I heard that “Lots” wasn’t originally meant to be on #TheFoodNetwork, and now it’s become the lead single. How do you feel about the reception of the track?
It’s funny because when Travis was like, “We gotta put this on the album,” I was like “Nooo!” [Laughs]. I’m so much more in-depth than this. But when he told me that, I knew it was gonna be big because he’s the pickiest person on the planet.

Our music styles are completely different; he likes Atmosphere, MF DOOM, Flying Lotus, and all that kind of stuff. I like Future, Lil Wayne, Gucci Mane, Drake, and shit like that.

So for him to tell me, “You should make more songs like that,” just made me realize this was gonna be way bigger. I think the reception from it, it’s been cool. It’s give or take, it’s not something that I would’ve ever wanted to do, or to be the first song to get noticed by. I think it does a lot for Allan too, because I feel like right now a lot of people don’t take him seriously because he’s so different, so me being able to give him a song that’s getting big also kinda gives him the clout to dabble in darker, grungier sound as well.

There are a lot of dips and peaks on #TheFoodNetwork, and “Taste Testin’” pretty much comes out of left field. How do you even begin to describe your sound?
Versatile. What I’m going for as an artist, I wouldn’t want anyone to ever describe it, just to give it that mystique. If someone were to say, “Oh, I’ve been hearing about Finding Novyon lately, what’s his music like?” The only thing you’d have to say is, “Go check out his music.” In a sense, it goes with my name. Finding Novyon, he could make trap music with Sonny Digital, or he could make soulful music with Travis Gorman, or anything. I’m all over the board.

It’s very eclectic, does that have anything to do with the title #TheFoodNetwork?
In Minnesota in the past year and a half, the only people that have really been put on a national scale are thestand4rd. So in the past year, we’ve just been grinding it out and doing shows—maybe two or three shows a month, doing as much as we can without any help from anybody. Allan and Bobby Raps have known me for a very long time. Allan is my best friend.

When thestand4rd thing happened everyone was really doing their own thing, and weren’t really around each other like that. In that time period, I met Travis, Devon, and The Rotation. When me and Travis started working together, we were throwing names around and he came up with #TheFoodNetwork and I was like, “Damn, we’re eating right now.”

Do you guys watch The Food Network a lot?
I like watching Top Chef or Hell’s Kitchen. I feel so much more sophisticated.

You were talking earlier about how your “Jordan year” has been a come up year for you. A lot of new doors have been opening up for you this year, what’s been your favorite or the most memorable moment so far?
Honestly, my favorite moment for me this year was going to New York for the first time. I feel like if I didn’t go to New York I would not be in this mindset, or even be here [Los Angeles]. Off of that one trip I met so many people. I’m pretty sure all the people that are working with me now and are pushing for me, have been watching me since then. It kinda made it like, “Okay, this kid is a good person and is actually about business.” It was my first time, and being able to perform there for the first time—it was really awesome.

I read before that when you recorded #TheFoodNetwork you were in a darker mindset so there’s grittier tones to it because you were watching your friends go out and meet their goals while you were still at your job. But now that you’re meeting your own goals, how do you think that’s going to change the sound of the next project?
Me being here is just going to make me work harder. I feel like I still haven’t done anything, all this great shit is happening but it’s still just the beginning. Everyone’s always like, “Oh my god, congrats!” and I’m like, “What are you saying congratulations for?” [Laughs].

I have done anything yet, I could die today. I could completely fuck it up, and have nobody like me or something. It makes me feel good to know that I’m in a position where I get to prove myself. I feel like my next project will be even harder.

Do you feel like your creative process has changed at all?
If anything it’s sharpened. The past two months I’ve been put in situations where I’ve just been put on the spot in front of people that I don’t know, like, “Here’s a beat, here’s a huge studio—make something!” To anybody that doesn’t really do this shit, they’d probably be scared as fuck, or intimidated or think about stuff too much. But since we’re just used to doing that—I’m used to rapping in front of [Travis’] mom, saying the worst lines in front of her [Laughs].

I think you can do both.
Me and Sonny [Digital] were talking about that the other day. He was like, “Man, I’m so tired of working with artists that only wanna talk about one subject.” We made four songs this week and all the songs are about different things, and he was like “See, that’s why I like working with you. You’re not afraid to go outside of the box, to talk about other stuff, to say personal shit.” You can still make it sound like what people want to hear.

Sonny knows of Allan and Bobby. Bobby and Sonny are really close, just to be there and be like, “Oh these are my friends!” and have him be like, “Damn, I’m already looking at Minnesota anyway.” He was like, “You guys are a secret stash.”

For the rest of the country, you guys are pretty much representing Minnesota. That’s all we really know, it’s kind of like you have all this power and responsibility.
Yeah, thats true but I feel like that’s the funny thing about it. When me and Allan were coming up, nobody back home really looked at us. It’s so ironic now. Especially Allan, he’s holding the state on his fucking back right now, and doing very well. It’s so in us, that there’s not even any pressure. I feel like we represent a state of mind more than anything. Us coming up, obviously Minnesota is gonna be looked at, but I feel like we represent the young kids of America. 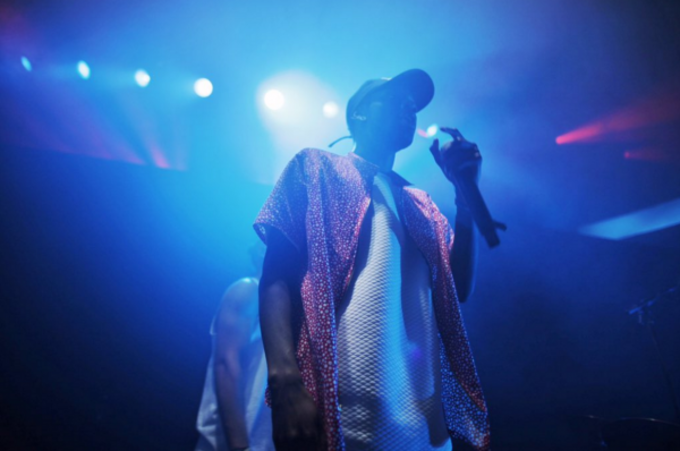 What do you want new listeners to learn about you from your music?
That I’m in this for longevity and that I’m not fucking around. That’s it [Laughs]. A lot of people have been asking me that, like what do I want to be in music? And I feel like I have the best vision of what I want to be, I wanna be how Lil Wayne was when he was coming up in the 2006-2008 era, but I also wanna be like Drake with unstoppable hits—tackling both pop and underground. Now, lyrics wise, I’m gonna be my total self and not sound anything like either of them but I just want that work ethic.

At this time next year, what are you hoping is different and that you’ve already accomplished?
I’m actually gonna have a professional team, because I’ve just been doing everything myself until now. Now being here and seeing that everybody’s hitting me up and all the people are coming to me, I actually have to sit down and use my brain to plan shit out. I need somebody to help me with that. So by then I’ll definitely have a professional team. And I wanna be doing bigger shows.