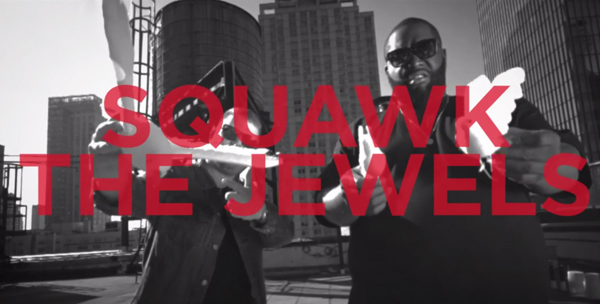 Killer Mike and El-P recently performed as Run the Jewels alongside TV On The Radio on The Late Show With Stephen Colbert, offering a fantastic performance of “Angel Duster.” Now, Colbert has included them in a sketch for his show, too, “announcing” that he’s signed the unstoppable duo for a multi-album deal, starting with Squawk the Jewels. As far as obvious jokes pertaining to the recently completed remix album Meow the Jewels go, this is a pretty good one.

Starting with a bird-based remix album before going on to detailing more ridiculous ideas, such as Couple Arguing Outside a Party the Jewels, the sketch escalates and escalates. The duo promise that they’ll be releasing Run the Jewels 3 after they’ve completed all of these projects, although they’ve warned that it won’t be until, say, 2029. As hilarious as all these ideas really are, let’s hope we get that next album a lot sooner than 2029.

Excited to announce that I’ve signed @runjewels to a multi-album deal! #LSSC https://t.co/lZMUwWvMP3