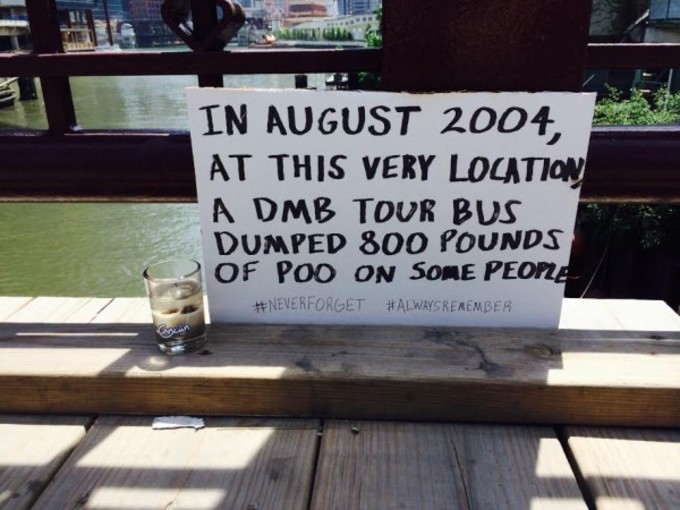 The bridge is a relatively small one. Its body is fairly short and narrow, and it is not nearly as busy as some of the nearby bridges that pump pedestrians, trains, cars, and buses into the heart of downtown Chicago. This bridge sits tucked away from the rest—off the mainstream radar—and receives little attention at all.

This bridge’s obscurity is in all likelihood the reason that, in August of 2004, the driver of a tour bus for Dave Matthews Band decided to stop on that bridge and empty the septic tank from the bus directly into the river below.

The rest of the story is something out of a Saturday Night Live sketch. While the bus was pumping 800 pounds of liquid waste (poo) into the river, a Chicago architectural tour boat passed underneath. About a hundred passengers on the boat were drenched in the remains of Slim Jims, protein bars, cornish hens, and whatever else people on tour buses eat. No one was injured, the driver received fines and probation, and life went on.

But almost eleven years later, this story still comes up whenever Dave Matthews Band is mentioned in Chicago.

But almost eleven years later, this story still comes up whenever Dave Matthews Band is mentioned in Chicago. It’s a stain on our city’s rich musical history, and we still haven’t been able to completely move on. I decided to take a trip to the bridge. After all, I was a Dave Matthews Band fan for many years of my life. I had to go see Poo Bridge.

I grew up in rural Indiana, a mile away from a venue that DMB would play twice a summer. In high school and when I was home from college, going to concerts was pretty much the only thing to do. I smoked a lot of weed and loved to act like a drunken idiot, and such behavior was warmly welcomed at a Dave Matthews Band concert. Becoming a DMB fan was a no-brainer.

Fast forward to June 2015. I’ve been living in Chicago for three years, and I now listen to real music like Young Thug and Chief Keef. I’m walking across Poo Bridge trying to imagine what that bus driver was thinking. I mean, you can clearly see any boats coming in either direction. There are also so many other places better suited for 800 pounds of poop—a sewer being the most obvious option.

I start thinking about all those poor people on the tour boat. They were there with friends and family, visiting a beautiful city and taking in all the sights. Instead, they were shit on by a bus.

Did the bus driver not see the boat? Was the poop coming out with so much velocity that he couldn’t turn it off? The bus really couldn’t hold it for a few more miles?

I realize that there are two logical answers to what really happened. One, the driver simply did not give a fuck. An act with such blatant disregard is a result of him straight up not caring about anything. His whole life he has been shitting on haters, and that faithful day in August 2004 was no different. He just let it fly. Thug. Life.

Or, maybe this bus was just acting out what it witnesses every single night. A belligerent human stumbling around, packed to the brim with Coors, beef, and whiskey, defecating immediately whenever it has to. This bus was hammered.

His whole life he has been sh*tting on haters, and that faithful day in August 2004 was no different. He just let it fly. Thug. Life.

The thought of it all was overwhelming. Visiting a place with such rich history always has a powerful effect on me, especially when there is musical significance involved. In New York there’s Strawberry Fields or Adam Yauch Park. Fans still regularly visit Graceland, Abbey Road, the Elliott Smith Figure 8 wall, and Kurt Cobain’s house. There’s musical history in every corner of the world, and—though maybe not quite as significant as other locations—Poo Bridge is a part of that.

Using accessories common to any Dave Matthews Band fan, I paid tribute—I lit a “Cancun” souvenir candle with a Van Halen (not Van Hagar) lighter, and left it by a sign I stuck in the bridge. I also poured out a 16 oz. Red Bull GRC Limited Edition Military can into the river to signify just one of the 800 pounds of liquid waste (poo) that was spewed onto water and flesh over a decade ago.

Check out some pictures and a video below.

“Standing on a bridge, watch the water passing underneath. It must have been much harder when there was no bridge, just water.” These lyrics from the DMB song “Funny The Way It Is” were stuck in my head as I left the bridge. Yes, crossing a river with no bridge would be a great challenge, and dumping liquid waste (poo) onto people would be nearly impossible. Unless of course, they had some sort of poo catapult or something.

As I walk away from the bridge, I see an architectural tour boat coming around the bend. I wonder if the passengers knew the brave people who sat in those seats before them, or if they wanted to become part of Poo Bridge’s legacy themselves. Maybe it was my turn to continue the story of the bridge. With some coffee, cigarettes, and five minutes, maybe I could be part of this bridge’s history.