Bergen is a historical Norwegian municipality with an internationally competitive petroleum industry, known for its colorful medieval wharf and the still waters of its harbor. If you travel by light rail about 20 minutes south from its center, you emerge at the terminus of a long, winding road in a much quieter town by the name of Fantoft. Follow this road up by foot another 15 minutes and you pass by neighborhoods of little mansions stacked across the slope of a rising hilltop. Keep moving, and you appear in a clearing that eventually gives way to a forested path carpeted by several layers of mud and fallen leaves. At the end of this path is a gorgeous medieval stave church, or rather a replica of one: Members of the early Norwegian black metal scene burned the original building down in 1992.

On a mid-November morning, hikers and their dogs flit in and out of the hilly expanse, grasping on trees to keep their balance and trying not to slip in the mud. Many of them are either ignoring or coming back from seeing the impressive wooden structure, which was originally built in 1150, at the center of all this natural beauty. Norway is a Christian nation well known for its unusual churches, constructed out of timber instead of limestone in the Middle Ages, many of which do survive to this day. The wooden edifice of the replica recedes into the thousands of years of old growth surrounding it, and yet one cannot help feeling as if the church is as much a work of careful craftsmanship in its own right as a wooden gravestone demarcating the real thing.

I had heard that fans of black metal can sometimes be seen haunting the grounds of Fantoft. As the first such attack of many that came to define black metal’s political core, its burning has become essential to the lore of the original scene. But on that morning, I was the only one in sight. (You can always spot a fan of black metal: Look for the spidery white logotype on a faded black shirt and his unhappy sneer.) What would they have come for, anyway? To pay their respects? For a genre of music doggedly committed to an anti-establishment ethos, that would be unthinkable. Perhaps they would have come to see the moment black metal peaked, for a little more than a year after the arson, black metal as an ideological concept had all but disappeared.

Not long after lunchtime, darkness has already settled over Norway, and everyone has retreated inside. Nevertheless, Norwegians have for centuries made the best of it. One long-standing tradition is to fill interiors with the light of little candles, such that even every table in their version of Starbucks has a dancing flame at its center. One evening, in another November several years ago, Norwegians hunkered down around these flames while watching a continuous seven-hour broadcast of the train ride between Oslo and Bergen, in the first instance of what came to be called “slow TV.” I learned the appeal on my own train ride along that same route: sun rising over grassy hills, greens and browns giving way to an all-consuming blizzard that lasted almost until my arrival.

It is in this environment that black metal took root. Old, cold, and full of trolls; a reaction as much to the quiet evenings that start so early in cozy pubs as to the preponderance of new wealth. One of my hosts, in Oslo, explained that once Norway struck oil the country has been kicking back ever since. Black metal musicians were never so content. They cut themselves on stage and breathed fire and composed odes to murder and gore. A vocalist of the band Mayhem, a young man named Per Yngve Ohlin, thought the world was a dead place through which his ghost was being telegraphed. He was rumored to have buried his clothes in the ground in order to smell like rot, and he wore on his face a thick white paste and black makeup that was later known as corpse-paint, a practice which became so popular that it practically defines the visual aesthetic of the early Norwegian scene. Ohlin, who called himself Dead, committed suicide by first slashing his wrists and then firing a shotgun into his skull. When he was found, by Mayhem’s guitarist, “souvenirs” were taken, including photographs and pieces of the body. One of the photographs, depicting Dead’s obliterated skullcap, made it onto a pseudo-official Mayhem release in 1995. By then, however, that same guitarist, who went by Euronymous, was himself already dead. 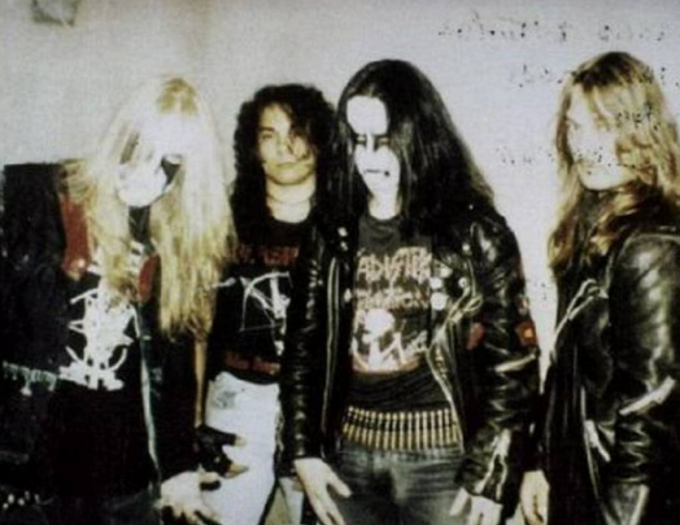 What is black metal? It may be more instructive to say what it is not. It is not death metal, that speedy chug-chugging explosion of noise. Black metal prefers to drag measures out for maximum consideration, and on a much higher register of bestial shrieks and overdriven treble. It is not always affiliated with modern National Socialist movements, but it can be, and most listeners are more than willing to tolerate neo-Nazi bands because black metal is supposed to be purely about the music. Ideologically, black metal espouses individualism, nihilism, and anti-consumerism, like some kind of Satanic Thoreau. It is dark and hateful because the battle to uphold artistic integrity in the face of late-stage capitalism will always be a losing one.​

When we receive black metal in the U.S., we are looking into black metal’s future, getting a glimpse of how it evolved out of violence and anomie into music so palatable that bands often debut tracks on NPR. But I wanted to understand how black metal bands today reconciled those murky origins with the genre they champion, and so I was on my way to Bergen to catch the second night of Blekkmetal, a one-off music festival. The organizers aspired to recreate the aura of the early-’90s scene and had booked legendary bands to play, including the reunited Old Funeral and the long-running Enslaved. I worried upon arrival that the festival would be too cute for its own good, coyly winking at its attendees, who as it turned out were in on the joke. The fear was realized as bands emerged on stage through wraparound velvet curtains, and though the music was deafening, fierce, and hateful, it was met with polite applause and horn salutes. Men in their late 30s gathered around to take group selfies. Thurston Moore was there.

The only people taking it seriously were the bands themselves. Hoest, who formed his band Taake in 1993, donned full corpse-paint and looked ready to go to war. Taake was scheduled to perform as the headliner, but Hoest was invited out for one song by another band to perform guest vocals, where he and his glistening bare chest were met with giddy cheers and more horn salutes. Helheim, another band dating to around the same time, beamed a succession of moving images onto the wall behind the stage; some added to the mesmerizing effect of the music, but others were less successful. One was a crucifix engulfed in fire, as promising a symbol of black metal as any, except that, like an animated GIF doomed to repeat ad infinitum, the cross was never actually consumed by the flames. The effect of the cross withstanding destruction was clearly unintentional, but it brought to mind the stave church at Fantoft, resisting all these many years to stay ashes.

The record store still exists today, although it’s now home to a lookalike called Neseblod Records. Nearly every inch of its walls is covered in some kind of black metal paraphernalia, mostly vinyl sleeves and posters, but also flyers and T-shirts and art donated by some of the original musicians. Mayhem, Darkthrone, and Burzum, Varg Vikernes’ solo project, are given special billing, comprising several rows of records. One can buy a 23-year-old Darkthrone record signed by Fenriz, as if black metal had frozen in time. “Come visit our black metal basement,” a sign outside advertises. On the evening I traveled there, I was the only visitor in the store. Without a word, I descended into its basement, where black metal acquired its taste for the shocking. But it turned out to be nothing more than a small cavern, where the air was thin and chilly, with stacks of records strewn this way and that, and the words “black metal” written on its furthest wall in fading black paint.