Nicki Minaj and Taylor Swift engaged in an unexpected back-and-forth on Twitter today after Swift took issue with Minaj's Tweets about being snubbed from the MTV Video Music Awards "Video of the Year" category. Minaj got a nod in the "Best Female Video" and "Best Hip-Hop Video" categories for "Anaconda" but rightfully felt left out of that coveted "Video of the Year" grouping. For reference, nominees in the biggest category of the night include Taylor Swift herself, Beyonce, Ed Sheeran, and Mark Ronson.

Minaj criticized MTV for the decision on Twitter earlier today, raising the possibility that her status as a Black female artist consistently relegates her to so-called urban categories like "Best Hip-Hop Video." "If your video celebrates women with very slim bodies, you will be nominated for vid of the year," she wrote. Swift took obvious offense, taking the Tweet as a personal slight, writing, "I've done nothing but love & support you. It's unlike you to pit women against each other. Maybe one of the men took your slot."

If I was a different "kind" of artist, Anaconda would be nominated for best choreo and vid of the year as well. 😊😊😊

If your video celebrates women with very slim bodies, you will be nominated for vid of the year 😊😊😊😊😊😊😊😊😊😊😊😊😊

@NICKIMINAJ I've done nothing but love & support you. It's unlike you to pit women against each other. Maybe one of the men took your slot..

Minaj fired right back, letting Taylor know the Tweets weren't directed at her at all. "Huh?" Minaj Tweeted. "U must not be reading my tweets. Didn't say a word about u. I love u just as much. But u should speak on this." She added soon after, "@taylorswift13 I'm still confused as to why u just tweeted me when I made it abundantly clear…"

Taylor seemed to back down in her own response inviting Minaj to share her win if "Bad Blood" takes home the award.

@NICKIMINAJ If I win, please come up with me!! You're invited to any stage I'm ever on.

Still, the Nicki vs. Taylor episode obviously spilled out onto Twitter and Solange showed some support by retweeting one of Minaj's main Tweets.

They're not missing the point, they're just attempting to overshadow the point. Oldest trick in the book. https://t.co/Y4dt1vKk6C

Kim Kardashian ​also seemed to join in (maybe accidentally) by Tweeting out one of her recent Vogue photos with an attached, "Imma let you finish but..." apparently alluding to Kanye West's infamous acceptance speech crash in 2009. Kim quickly deleted the Tweet and went on to claim that the reference was accidentally poor timing. 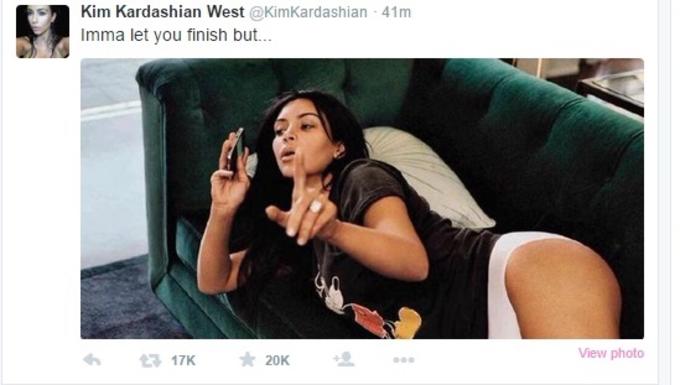 I'm not trying to shade anyone! That's not my style! I just thought that caption was perfect for that pic! Changing the caption now! #ironic