Like many of you, I came up in an era where college was supposed to put you on a guaranteed path to, at the very least, a living wage. My parents believed in their hearts that they were preparing me for the real world as they drove me to SAT prep classes and gave sober lectures on frugality. Everything they taught me presumed a) one source of income, and b) a guaranteed source of income for their college graduate (to be).

They focused on teaching me the important things, like jotting down expenditures in the top of my checkbook. Not once would it have crossed their minds to teach me how to tactically deliver a rent check so that, while technically turned in on time, it would be too late in the day to reach a bank, thus netting me an extra 24 hours to somehow stuff enough cash into my account to avoid an overdraft. Not once have I had to futz about with shorthand checkbook accounting. I have, however, played that rent check shell game more times than I’d care to admit.

While chasing the dragon of financial stability in my post-college years, I stumbled into a number of grimy Internet back-alleys that offered ethically and legally gray methods of pulling in extra income. Many of these ventures were exploitative (Mechanical Turks). Many were fruitless (signing up for focus groups). Many were potentially dangerous (Craigslist gigs). Most, however, were just too inconsistent to act as a reliable buffer between the regular and dollar menus.

But then I found an oasis in the desert. 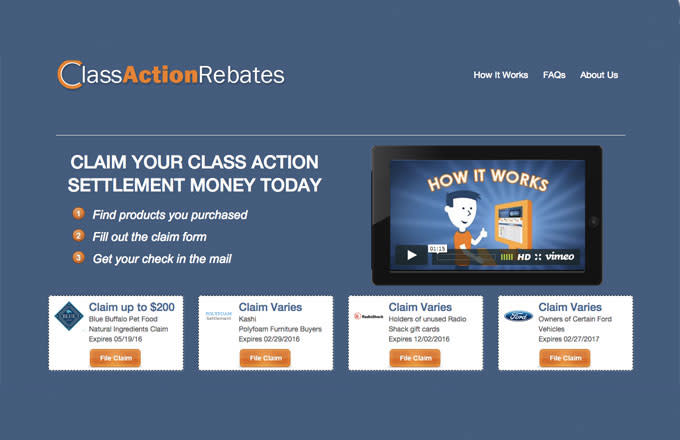 ClassActionRebates.com is a website so stripped down that, at first glance, it seems like a scam. Most of us who have come of age alongside the Internet have innate bullshit detectors that allow us to navigate the click minefields of torrenting a file or dismissing a pop-up that urges you to clean your “infected” computer. The splash page of CAR (as I’ll refer to it from now on) trips the alarms with aesthetics alone. But after a few minutes of poking around without a malware boogeymen jumping out to scare you, you can begin to see the site for what it truly is: a minimalist list of suits waiting for those who qualify to pounce and take the money, lest it go left on the table by the uninformed (or supremely lazy).

There are other websites that collect news and updates on ongoing class action suits but none are quite the easy-access cash grab portal that CAR provides.

For the uninitiated, a class action is a type of lawsuit where a group of people are collectively represented by an individual. If Company X has wronged 100,000 people, it makes more sense to have just one of the wronged appear in the courtroom than the whole lot. Furthermore, it keeps the legal system uncluttered to bundle a number of the same suits into one package, rather than have individuals bring their cases to the court one by one. As we are nothing if not a litigious nation, this breed of lawsuit is a primarily American beast.

An empirical study of class action settlements by the American Bar Association found that in 2006–2007 alone, district judges approved 688 settlements to the tune of roughly $33 billion dollars. After legal teams took their $5 billion cut, the classes were left with $28 billion. If every person in America was involved in these cases, each and every one would be getting around $88 dollars. That’s a new pair of Roshe Ones you’re owed.

No class action case has received more press in recent years than the ongoing one against Volkswagen for an emissions test cheating scandal that affected millions of vehicles worldwide. While scores of consumers are joining a suit against the German auto company, individual U.S. states are filing their own suits in what will likely go down as a historic, multi-pronged legal battle.

When I first discovered CAR, what struck me immediately was the simplicity with which I could add my name to a claim. I’d always imagined joining a suit involved getting a letter in the mail and filling out a bunch of paperwork. Possibly even having to put on a shirt and tie and set foot in a courtroom. I couldn’t have been more wrong.

Yes, there were options to print out claim forms, but most visitors to CAR are likely taking advantage of the links to individual case’s online claim forms. Dive into one case, and a few clicks later I’m checking off some boxes about the Naked juices I purchased back in 2008. There was an option to file with receipts and an option to file without for a reduced settlement. I chose the path of least resistance. I didn’t care if the packaging had made it seem like those juices were health products, they still tasted good to me. But this site was informing me that, despite my overall satisfaction with the product, I had actually been defrauded and was entitled to real world compensation.

Weeks later, after I’d long forgotten about my late night visit to the site, I found a check from a law firm in my mailbox. I opened it up, perplexed at who was paying me and why. I stared at the $25 check for a while before the source of my sudden good fortune dawned on me. 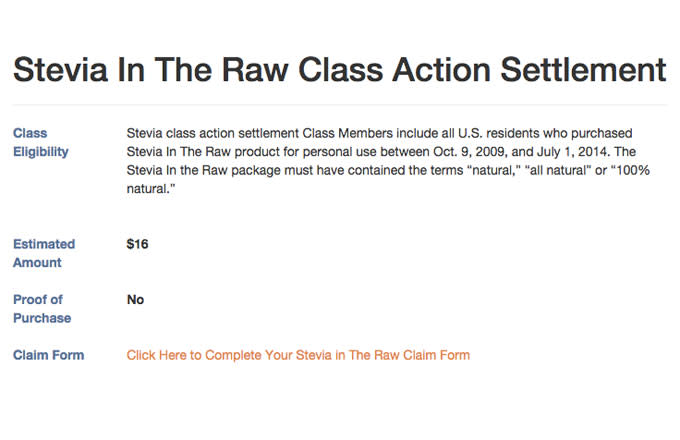 I spent the following months intermittently checking in on CAR when I had time to kill. If I saw something I was qualified to join, I was signed up a minute or two later. By my estimations, since I discovered the site about 18 months ago, I’ve been paid out on 10 different cases to the tune of roughly $280. One check came in at a whopping $75, but that was an outlier. Most were paltry, one even as low as $7. Still, I’d earned a tidy little sum. Not life changing by any stretch, but as I’d, at most, sunk in no more than half an hour into applying for these surprise checks, I wasn’t complaining. I was making $560 an hour with this gig, after all.

I had so many questions, though. How could this golden goose keep laying eggs? What was the site’s business model? My largest question focused on the lack of proof needed for me to get paid out on these claims. Like any sane person, I wasn’t in the habit of holding onto gas station receipts for protein shakes I’d purchased in college. What was to stop me from just lying and swooping in on every receipt-unnecessary case out there?

Enter Jonathan Selbin, one of the partners at Lieff, Cabraser, Heimann, and Bernstein, a law firm based in San Francisco. Selbin and the firm specialize in class action suits and he promised to clear up any worries I might have.

In addition to making it abundantly clear that not only would filing fraudulent claims on the site be risky, illegal, and SO not worth it (facing jail time over a $20 check?), he also expressed concerns that if enough people took advantage of such an easy claim system to make fraudulent claims, and the major companies caught on, they’d likely stop cooperating with these cases altogether and just duke it out in court.

This isn’t to say Selbin discouraged use of the site. On the contrary, he found that the Millennial savvy and/or cynicism that might prevent us from fucking up our computers might also be preventing us from collecting on legitimate cases. It’s easy to throw out an unsolicited letter on the grounds that it might be phishing. But maybe we’re throwing out free money, too.

“Young people think they’re only going to get 19 cents or there’s too much work,” explained Selbin. “But these cases settle for hundreds of millions, if not billions, per year. Sometimes the payout is a $50 check, sometimes it’s a couple thousand per person.”

So, with a class action lawyer’s blessing, I’ll continue to pop in on the site from time to time and line up some cash surprises for future me. And, if you’ve got a legitimate claim, you should too. Go get your money. You can thank me for the extra walking around money (months) later.