I can't even look at his face without feeling a burning repulsion in the inner depths of my belly. I mean, there are a lot of random celebrities I irrationally hate (ugh sorry Ron Livingston, James Van Der Beek, Natalie Portman, et al.) but James Franco has committed too many offenses for this hate to be brushed off simply as "irrational." And I'm afraid it's too late for him to mend things. We've officially reached past the point of no return.

I'm not sure where things went wrong, because Freaks & Geeks was great (though Franco had little to do with its greatness), and I was admittedly intrigued when he was that token "Who's that hot guy?" in the Spider-Man series. (I honestly wish he had just been crystallized in that "Pie so good" scene.) Pineapple Express was hilarious too, and I wasn't even aggressively rolling my eyes when he played a gay man opposite Sean Penn in Milk. I guess there was no single breaking point. Rather, this has been a long deterioration in the works, a journey towards eventually becoming the single most insufferable man in Hollywood. Sure there are worse actors and worse people, but insufferable is the word that epitomizes Franco, the film industry's human gag-reflex.

The thing about James Franco is, he's the greatest poser of our time. He bills himself as this Hollywood Renaissance man (he's an actor—of TV, film, and stage—and also a director and writer and poet and painter and photographer and film critic and novelist and grad student and musician in a band called Daddy, oh my!) but is he actually good at any of these things he claims as skills?

First let's look at what's he's best known for: acting. Franco has had a busy career, but not necessarily a good one—though perhaps his never-idle IMdB page has tricked some of us into believing it was. Good roles for him are far and few between, like when he played the Britney Spears-belting, RiFF RaFF-inspired, cornrow-sporting rapper Alien in Spring Breakers (so weird and so perfect). Though everything James Franco does always annoyingly borders on performance art, whatever performance art-like character he brought to Alien worked perfectly in Harmony Korine's modern masterpiece—a rare win. And then the gates of annoyance crashed open when Franco took on director-writer-actor duty of adapting William Faulkner's As I Lay Dying, posing himself as that pretentious, faux-intellectual Literary Bro we all try to avoid at parties (YOU KNOW THE ONE). Speaking of literature, pretty sure Franco was personally attacking me when he took a selfie with an Elena Ferrante book and almost ruined the entire Neapolitan series for me: 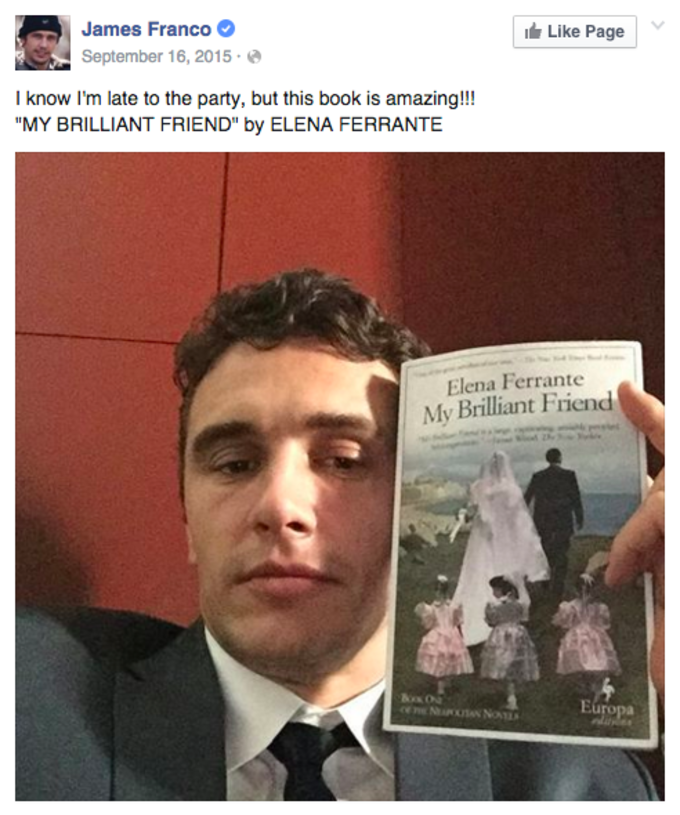 But it didn't stop there—James Franco decided he would become a writer. There's the short story he wrote about "Lindsay Lohan" for VICE, which was mildly aggravating but mostly avoidable. But then he started becoming even more unbearable—dare I say problematic—when he pulled shit like Straight James Franco Interviews Gay James Franco, as if posing as a homosexual was a brave (?), unique (?) performative art piece. Try to unpack the excerpt below:

Straight James: Let’s get substantial: are you fucking gay or what?

Gay James: Well, I like to think that I’m gay in my art and straight in my life. Although, I’m also gay in my life up to the point of intercourse, and then you could say I’m straight. So I guess it depends on how you define gay. If it means whom you have sex with, I guess I’m straight. In the twenties and thirties, they used to define homosexuality by how you acted and not by whom you slept with. Sailors would fuck guys all the time, but as long as they behaved in masculine ways, they weren’t considered gay.

It's long been rumored James Franco is gay, but so what? What was this piece proving? That he has "gay tendencies" but don't you DARE think he likes to sleep with men? As if that wasn't already terrible enough, Franco started doing this double-personality thing as a series, like when Boy James Franco interviewed Girl James Franco, this time putting on his Feminist Pants to prove that he's what, super self-aware? In the interview, Girl James Franco chastises Boy James Franco for only directing Faulkner and Steinbeck adaptations full of white dudes, as if writing out those offenses absolves him from actually doing them. By the way, god forbid he ever does a "White James Franco Interviews Black James Franco" because I swear to god I WILL throw my laptop out the window. If this is some long publicity stunt for The Deuce, an upcoming '70s porn drama in which Franco plays twins, it's certainly not making me want to watch it.

Last fall, he even got a column over at Indiewire where he regularly reviews films as James and his "reverse self," Semaj (again pretending to be two people, what the fuck). James Franco, now a FILM CRITIC? But in twin form? Just stop. What pisses me off about Franco is that his fame has granted him access and authority to so many fields even though he consistently remains mediocre at best. His writing is shit, his directorial/writing efforts have been flops (his Faulkner adaptations The Sound and the Fury and As I Lay Dying received 22% and 41% Rotten Tomatoes ratings, respectively) and in a review of Franco's photography exhibition, the New York Times wrote, "[Franco] remains embarrassingly clueless when it comes to art." Though I can't imagine it was more embarrassing than this poem he wrote and recorded for Obama:

He was also apparently a terrible student (he was notoriously caught sleeping all the time) and was allegedly responsible for getting an NYU professor fired after receiving a D in his class, a.k.a. not receiving celebrity treatment. But then he'll write an essay like "Should I Go to Grad School" as if he were the scholarly authorative voice on education. Hmm.

The last straw was when it was announced this month that he would be directing the film adaptation of the insane, viral Twitter story about and by Zola. This "stripper saga" is truly a stranger-than-fiction tale that, unsurprisingly, got a movie deal. But how could it go to James Franco? Like, after everything Franco has plagiarized and appropriated, he'll take Black Twitter too? Oh hell no. After his performance in Spring Breakers, the eerily similar story of Zola may feel like a natural fit for him, but 1) this isn't, and shouldn't be another Spring Breakers and 2) James Franco is directing, which is a lot different than if he were being directed by someone like Korine.

The easy solution here may be "James Franco should just stick to acting"—like he'd EVER listen to such an advice—but even that seems like a dangerous suggestion. His filmography is mostly a long list of garbage, and his acting is often one-note and unreliable. Even Sony was convinced James Franco's terrible acting "ruined The Interview." It's arguable whether The Interview could have been saved by an able actor, but Franco is responsible for spoiling recent works of some old-school auteur directors. Last year he starred in Wim Wenders' Every Thing Will Be Fine, the filmmaker's career-worst. He also got to work with fellow German director Werner Herzog in the upcoming Queen of the Desert alongside Nicole Kidman, and while the film's terrible reviews from last year's AFI Fest mostly blamed Herzog, Franco was said to be "passionless"—a typical description of the actor's performance.

Now James Franco is in a new Hulu limited series 11.22.63 (which premiered last night), a Stephen King adaptation in which he plays a high school teacher who travels back in time to stop President John F. Kennedy's assassination. Along the way, he falls in love and, of course, complications arise. It's an ambitious show—to jump from modern-day to the '60s and create two wildly different worlds is no easy feat—and though it's hard to tell from the pilot if it will have longevity, many are impressed by its promising premise. Sadly, what mostly ruined the show for me was having to sit through James Fucking Franco, now too tainted by his past missteps to be appreciated for when he does make a right move (11.22.63 is undoubtedly one of the better James Franco projects of late). It's come to the point where his extracurricular activities are so agitating that basically anything he does just bothers me. He's a virus, or some opposite-day King Midas.

So is it too late for James Franco? It seems too harsh to tell the guy not to do ANYTHING, ever—even I won't do that. What could work for Franco is if he were to lay low for a while (like, a very, very long time) and maybe even take some acting classes in the meantime, and then be SUPER selective about his movies. He tends to go H.A.M. adding to his filmography, which decreases the overall quality of his projects. But he has proven he can stumble upon a good moment or two, and he should look for that Spring Breakers magic again. Even if he's doing this whole thing as a stunt, we're all getting tired of it. But most of all, isn't James Franco tired? Maybe he should take a long nap.