Back in September a study predicted that 2015 would be a grim year for race relations in the United States. Largely thanks to a string of violent police shootings of black men and teenagers, the most recent of which was the murder of 17-year-old Laquan McDonald in Chicago, it should come as no surprise that a new poll by the Wall Street Journal and NBC News shows race relations are at their worst since 1995.

"This month, only 34% of Americans believe race relations in the U.S. are fairly good or very good, down from a high of 77% in January 2009, after the election of Barack Obama as America’s first black president," WSJ reports. The figure is the lowest it's been since O.J. Simpson was acquitted of murder in Oct. 1995. 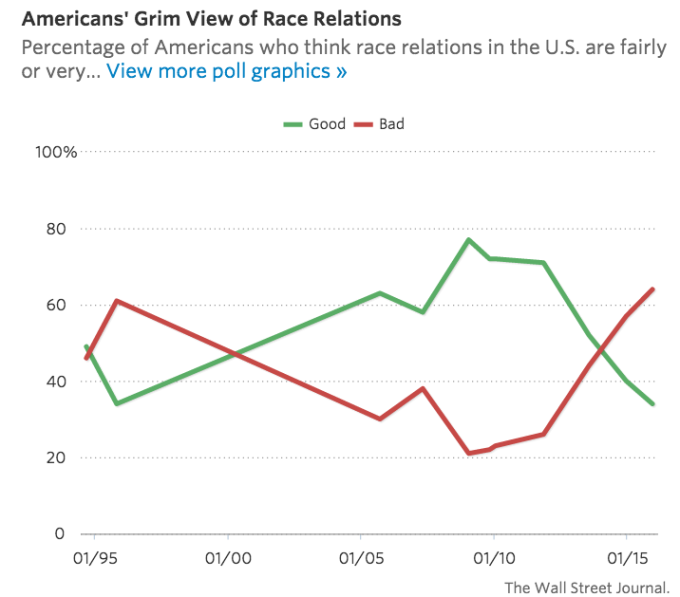 Low opinions of race relations persisted across the board, with 33 percent of whites, 38 percent of Hispanics, and only 26 percent of African Americans saying race relations were "very" or "fairly" good. The poll also highlighted differences in political ideology—22 percent of self-reported Democrats said the debates and protests of police brutality was one of the most personally important news events of the year, while only 7 percent of Republicans said the same.

Race relations have been under scrutiny for several years; in fact, 2014 was one of the most racist years to date. It's sickening how little things have changed, but given our current political climate, it's not altogether surprising.