Because I'm sad and I hate myself and I never get to spend Thanksgiving with my family, this year I decided to spend the weekend before America’s most gluttonous holiday watching a terrible slasher movie called ThanksKilling. I had heard about it at a party a few months ago and the pitch was too weird to pass up: "A possessed turkey terrorizes five college students during Thanksgiving break." And plus, being a horror fan, I welcome any reason to Halloweenify other holidays. ThanksKilling really is as bad as it sounds though—no, worse. And yet, the film, released in 2009 and about a murderous turkey named Turkie (I know), somehow must have become some sort of cult holiday staple, because it warranted a fucking sequel. (Weirdly, the second movie, released in 2012, is called ThanksKilling 3, while ThanksKilling 2 does not exist.)

Since the real Thanksgiving has a more horrific origin than the one we like to remember at the dinner table with our families, I suppose watching a horror movie is the most appropriate. ThanksKilling delivers, in that it is truly, truly horrendous.

I should have known what I was getting into when I saw the poster, which states loud and clear, "Warning! Boobs in the first second!" and yet I was still shocked when, in the first second, a pair of breasts started bouncing on the screen. The film opens on 1621—"moments after the first Thanksgiving"—and for some reason a pilgrim woman is running away with her blouse open. Of course, she gets chased by our demonic turkey and dies, while Turkie cackles in a gruff voice, "Nice tits, bitch." (I can't make this up.)

Feature
The Best Horror Movie Every Year Since ‘Psycho’

But anyway, after being laid to rest for over 500 years, this turkey gets summoned back to life via the disturbance of a Native American artifact (of course). It happens via some dog pissing on it, which makes Turkie shoot out of the ground where he was buried and yell, "Aw fuck, I'm pissed!" (There is an incredible amount of wordplay in this film, by the way.) He then kills the dog ("an axe-ident," he calls it) and then his owner, whose blood he promises to "drink like cranberry sauce." As you can tell, the screenwriting here is really something else. By the way, let's just pause to appreciate this photo of the man behind the movie who also voiced Turkie—Jordan Downey: 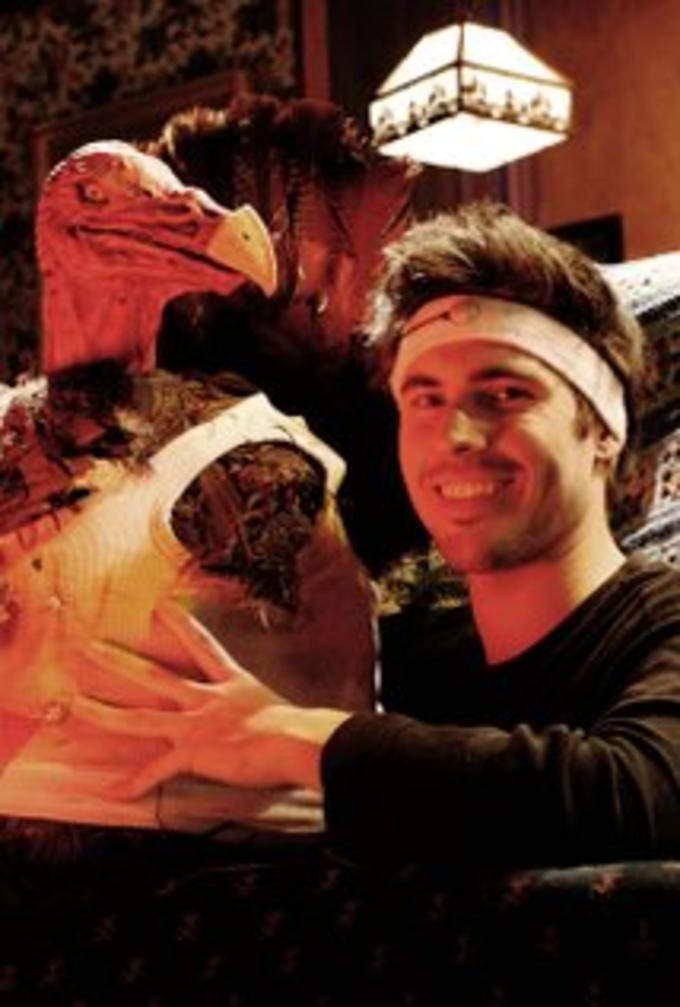 The college kids are on their way to prude girl's house, who happens to share the same name as me (Kristen), when their car breaks down. They're forced to camp in the middle of nowhere, which leads to the telling of the Turkie urban legend, and then Kristen saying things like "I'm a little beaked out—err, freaked out." Nice. I kind of purposely blacked out at this point, but here's the gist of what happens next: Kristen runs into Turkie, realizes it's not just an urban legend, and the kids make their way to Kristen's house. And then the Thankskillings begin. The first of the friends to die is... you guessed it! The slutty friend! It happens by a completely unnatural turn of events, which is that she just randomly starts fucking a guy we have not yet been introduced to. While the dude gives it to her from behind, Turkie kills the guy and fucks the girl himself (DON'T ASK ME HOW), and says, "You just got stuffed!" before murdering her too. Horrified yet?

Turkie, of course, doesn't stop there. He wants to kill the rest of the gang, so he wears one of those disguise glasses and visits Kristen's dad, convincing him that he is one of Kristen's friends. He asks if Turkie is a "midget friend" which is kind of a rude thing to ask someone! Kristen's dad obviously deserves to die, and he does, and then Turkie pulls a Leatherface by carving off his face and wearing it in order to trick the kids. YOU WOULD THINK THAT WOULD NOT WORK BUT—SURPRISE—IT DOES.

Literally NO ONE notices that Kristen's dad is just a turkey wearing his face, even though his face is literally ATTACHED BY A STRING, he still has the body of a goddamn turkey, and he is now SEVERAL FEET SHORTER than her actual dad. Look how happy Kristen is to see her dad. I literally cannot: 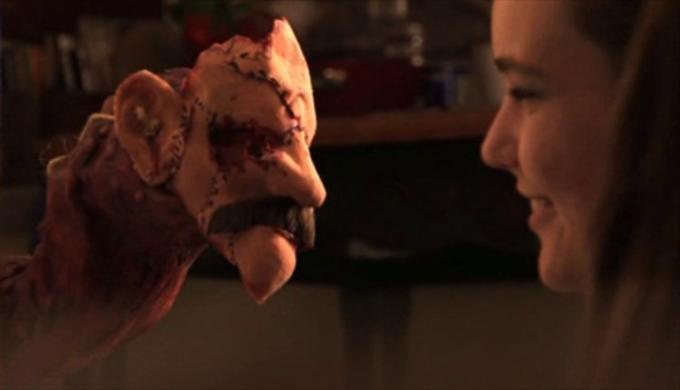 A series of horrifying killings follow, with fat horny guy "accidentally" eating the turkey (because he's fat and hungry, so of course he randomly picks up a turkey on the street and eats it) which makes Turkie burst out of his stomach yelling the infamous tagline, "Gobble gobble, motherfucker!" Suddenly there are homoerotic undertones as nerdy guy laments his death, and then goes into a strangely romantic flashback montage of them feeding each other ice cream and skipping while holding hands. The kids then find out that the only way to kill Turkie is to burn him at the stake, which they accomplish—or so they thought. Thinking they defeated the evil turkey, they go back inside to casually watch a movie and continue their Thanksgiving festivities, even though KRISTEN'S DEAD DAD IS STILL LYING ON THE FLOOR, WITH HIS FACE CARVED OFF. No one cares and no one bothers to clean it up or call the police. Everyone is terrible.

After an hour of eye-fucking Kristen and jock boy finally IRL fuck in the last minutes of the film, leaving nerdy guy as the third wheel. This is when Turkie comes back (because he survived in radioactive waste matter???) and beaks the guy in the ass. He then pecks the jock to death too. Kristen is left as the Final Girl, yells "PECK ON SOMEONE YOUR OWN SIZE" and then supposedly defeats Turkie... but considering a ThanksKilling 3 exists, we know this is not true. God, what a waste of my time.