A young dude is dragged through a meatlocker by this cool goth girl. They end up in a huge underground space where a horde of people are dancing to a remix of New Order’s “Confusion.” Suddenly the young man—who for whatever reason is wearing a beret—spots a droplet of thick red liquid on his palm. It’s blood, obviously, and before you know it the rave-goers are drenched in the stuff; gallons and gallons shooting out of overhead sprinklers.

It’s a scene right out of a movie. Blade, to be specific. But I didn’t understand the reference when my boss approached my desk a few weeks back. “Eric,” she started. “Do you want to cover this blood rave for us?” “Yes,” I immediately replied, oblivious to what exactly constituted a blood rave, but amused enough by the pairing of “blood” and “rave” not to refuse. “I would love to attend a blood rave.”

A quick Google search informed me that the event was part of a series of events hosted by BBQ Films to give life to some cult classics. “BLADE RAVE” was BBQ’s latest effort, and the invite promised a night of debauchery—headlined by Crystal Method, an electronic duo featured on the soundtracks of some of the Blade sequels—intended to closely mirror the opening scene from the 1998 film. Directed by Peter Norrington and written by comic book genius adaptor David S. Goyer, Blade stars Wesley Snipes as the titular character, a man with superhuman powers who spends his days hunting down vampires. His latest target, Deacon Frost (Stephen Dorff), is a formidable foe, and the film sees Blade not only hunting him down, but learning more about his mysterious past.

I’ve never been taken by comic books, or comic book film adaptations, and I’ve certainly never identified strongly with any sort of fandom. But this was the appeal to “BLADE RAVE,” an evening that promised everyone else the chance to connect with a world they adored. I, on the other hand, had no relationship with the film, with New York’s Comic Con—happening the same weekend of the event—or raves. I had skipped that stage in my adolescence. Instead, I intended to go in blind, with an open, but cautious mind. 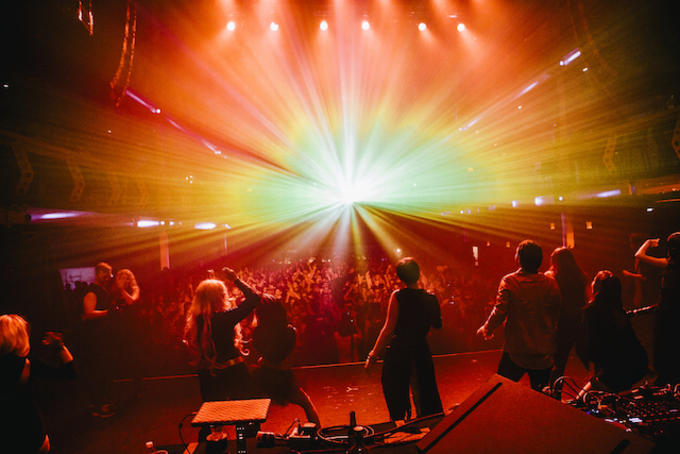 After all, “BLOOD RAVE” was to be my great ethnography, my opportunity to delve into the lore so many people in this goddamn universe find alluring. I was going to dance, drink, get my face made up, and, if I was lucky, get soaked with a healthy dose of synthetic blood. So early last Friday, I began to anticipate the Instagrams, Snapchats, and condescending tweets I would cultivate about “BLOOD RAVE” and the “purebloods” (as the VIP guests were affectionately named) who were attending. It helped that my "pureblood" status—a press perk—allowed me to watch the whole thing from the second floor.

I arrived to Terminal 5 (earlier associations with the venue: James Blake and HAIM) really early, deciding to go directly from work. Anyway, I was sporting a sweatshirt and black jeans, and immediately on checking in, knew I was out of my element. Surrounding me was a line of fans, all waiting for doors to open. Some were bloody and bruised, others wore black clothing and vampire fangs, but the most dedicated, at least in my opinion, boasted full on Buffy the Vampire Slayer vampire makeup. The cheap ‘90s kind and one of the aspects of the supernatural series I enjoyed most.

The dance floor was deserted when I finally walked in, but it was still early so I made my way directly to the second floor, where I was greeted by a bar, a bunch of tables with stools, and a row of makeup artists who were there, in my mind, just for me. After getting a whiskey ginger, which I quickly finished, I sat down for Sara, one of the makeup artists who was truly responsible for the great time I eventually found myself having.

“So do you want vampire makeup?” she asked. I eyed a couple of other people being made up and wasn’t really down with that vibe. Sara could sense this and decided to make me a victim. She applied a generous amount of dark blush under my eyes before moving on to my forehead. I didn’t know what she was doing, but we had been chatting for a bit now, and I had full confidence in her abilities.

When I looked at the mirror she placed in front of me, I saw a large bloody gash eating up my forehead. “You look like you just got into a really bad bar fight with a vampire,” she told me. “Perfect,” I thought, and proceeded to find good lighting so I could send a photo to my mom and a Snapchat video to some buddies. Even though I hadn’t seen Blade, I was fully immersed in the experience by this point. It was something I realized after a man with blood splattered all over his chin grinned in my direction. 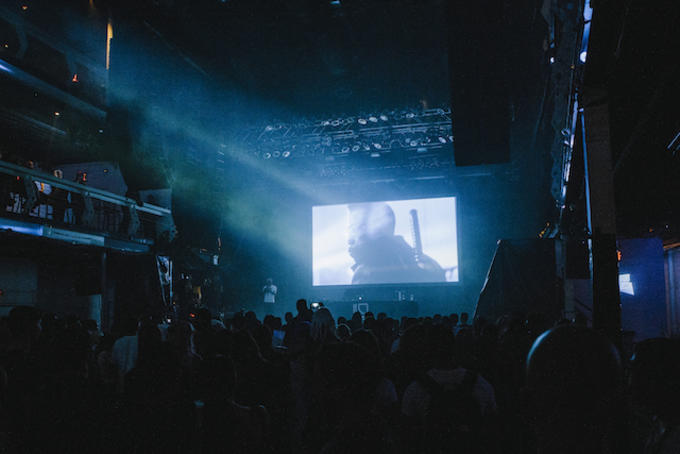 The friend I had invited showed up just around the time things started happening. A bunch of costumed figures and one really hot, not-so-costumed dude made their way onstage to kick off the night. They announced the lineup, played out a scene that I found strange, confusing and funny, and hinted at the “blood” part of the evening, the reason, let’s be honest, that most were in attendance for. Then everyone proceeded to dance.

Meanwhile, I got a beer, and escorted my friend to Sara, who gave her two very real-looking cuts on her cheek. Since I was there, and reveling in my look, I asked Sara to make me look worse. I thought a bite mark on my neck would be sexy and cool, but Sara didn’t have the tools and ended up making a huge, infected wound using paint and cotton. I looked awful and loved it.

We continued to drink, take photos, and eventually made our way to the rooftop, where BBQ was hosting a screening of the film. We talked to some other fans, a couple who were enamored with Sara’s handiwork, and got a few more drinks. Meanwhile, downstairs, scenes from Blade were being reenacted and everyone seemed to be really into it. We didn’t join in, but we were patient, anxiously waiting for the denouement.

It was pretty late when it happened. A bunch of people working the event approached the dance floor with spray machines and coated the crowd with some real-looking blood. I had learned earlier in the evening that the blood was a specific recipe, a non-toxic, odorless concoction that was fine in your eyes and mouth—although I saw a few people toss their booze after some of the stuff got into their drinks. 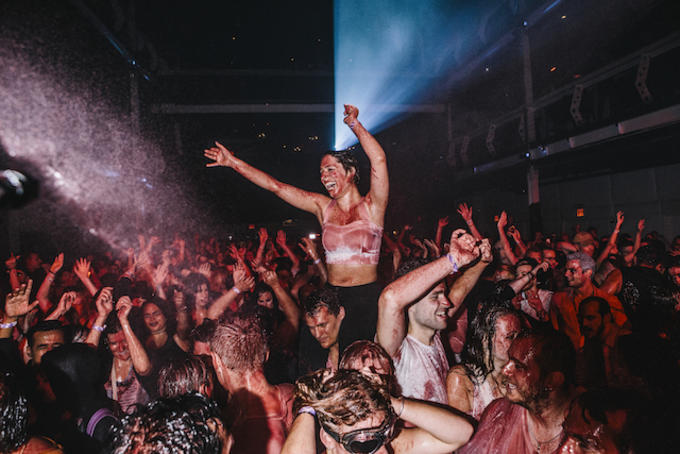 I was surprised just how much of the stuff BBQ Films brought. Everyone was soaked head to toe, the floor was coated with a thick red sheen, and although the rave was in full swing before, there was something freakishly intoxicating about the ordeal. Everyone danced faster, moving their hands through their hair and stripping off their wetter layers of clothing. I saw boyfriends carry their fanged girlfriends on their shoulders, heard screams (of joy, I assumed), and relished in the fact that I was safe, able to watch it all from above.

By the time we left I still knew very little about Blade, but that didn’t bother me. I played along, observed a ton of people who really seemed to be in their element amongst all the gore, and had the confidence—in my drunken stupor and with a horrifyingly made up face—to leave my number with the attractive bartender, who, by the end of the night, was probably the only person to go home clean.