“Geniuses are always branded as crazy,” Pablo Emilio Escobar Gaviria says in an episode of the new Colombia-filmed and based Netflix show Narcos, from creators Chris Brancato (Hannibal, writer of Species II), Doug Miro and Carlo Bernard. Escobar was the craziest motherfucker on the planet when he controlled the Medellin Cartel in the ’80s and early ’90s, before his [Spoiler Alert] 1993 demise. Throughout 10 engrossing episodes, the bilingual Narcos uses fictive dramatizations and real life events interspersed with archival footage to depict Escobar’s life, from his rise in the late ’70s to his escape from his self-designed prison in 1992, with a high death toll of political figures, cops, and his own men.

But you're probably already pretty familiar with all that.

The world has always had a fascination with the man who made the Forbes Billionaires List seven times (Silicon Valley and Walter White have nothing on this guy), and had so much money he had to bury a lot of it. He left a bigger dent on society than any other drug lord or cartel, giving the media endless fodder in the process. In the past couple of decades, several movies, TV shows, and docs have been made about Escobar, and more are in the pipeline. So why is pop culture so obsessed with el jefe? Even if you found him to be a deplorable person—he was—he loved his family (this makes him relatable), loved animals (apparently not cats, though), gave money to the poor (his was dubbed “Paisa Robin Hood”), and became a self-made businessman who accrued a shit-ton of dinero selling drugs—something your local weed dealer will never amount to.

Those aforementioned qualities probably don’t make up for him paying the M-19 communist group to take siege of the Palace of Justice and torch 6,000 files on him; or using his “Robin Hood” angle to get elected to Congress as a means to seek immunity. And his ability to generate enough violence to bend the world to his will and inveigle the government to abolish extradition to the U.S—“better a grave in Colombia than a cell in the U.S.,” Escobar said—which they did in order to curtail the violence and stop the police bodies from piling up. If you were dumb enough to speak ill of him, he’d order a hit on you. He had the outspoken Minister of Justice Rodrigo Lara Bonilla and the pro-extradition presidential candidate Luis Carlos Galán assassinated, and according to Narcos, Escobar whacked one his own men to death with a shovel. Despite those volatile characteristics, he was smart and crafty and got away with an impressive amount until it inevitably caught up with him.

The cat and mouse game Escobar enacted with the DEA and Colombian government certainly makes for riveting television. As Narcos points out, the inexorable narco-terrorist was bigger than GM, and in 1989 he helped Americans consume 660 tons of cocaine—no wonder nobody remembers the ’80s. During the war on drugs, he built his own palatial prison/fortress—with pool tables, video games and hookers—called La Catedral or “Club Medellin;" he owned a lot of hippos; he sparred with rival cartel, the Cali Cartel; he kidnapped and then killed revered journalist Diana Turbay. All of this sounds absurd, but as a Narcos title card reads, “Magical realism is defined as what happens when a highly detailed, realistic setting is invaded by something too strange to believe. There is a reason why magical realism was born in Colombia.” As fantastical as some of these events seem, they actually occurred.

Like The Wire and The Americans, Narcos uses different perspectives to weave its historical tale, showing the stories of real life DEA agents Javier Peña (actor Pedro Pascal, aka Game of Thrones’ Oberyn Martell) and Steve Murphy (the Macaulay Culkin-resembling Boyd Holbrook), President Cesar Gaviria (Raúl Méndez), Escobar himself (Wagner Moura), and the Colombian National Police and Search Bloc, who spent years on a bin Laden-like manhunt to kill him.

If you’re a history buff, you may be confused with the nonlinear unfurling of events, which seem to jump around a lot. For instance, in episode eight, it begins with Diana Turbay’s kidnapping (1991), shows Escobar’s apartment complex, Monaco, exploding because of a car bomb (1988), his cousin being killed (1990) and then ends with Escobar going to prison (1991).

With Escobar’s larger than life persona, not everything has to be accurate, though. For many people, their Escobar point of reference is tethered to seasons 3 and 4 of Entourage, when Vinnie Chase squeezes into a fat suit and stars as the gordo Escobar in a straight-to-DVD movie called Medellin. In watching the awesomely satirical trailer, it’s the kind of movie Hollywood and moviegoers live for: romance, explosions, bad Spanglish. (Somebody, please actually make this movie.) Escobar: Paradise Lost, a film that actually did get produced, was released in June in the U.S., starring Oscar-winner Benicio del Toro as the menacing Escobar who mentors Josh Hutcherson (Peeta!), a guy who visits Colombia to surf but instead he falls in love with Escobar’s niece and gets embroiled in the family business.

In other films, Escobar was demoted to the sidelines and instead made cameos, including in 2001’s Blow, based on the life of Medellin Cartel member George Jung, played by a flaxen-haired Johnny Depp. The documentary Cocaine Cowboys gave Griselda Blanco, a Medellin Cartel member who was just as vengeful as Escobar (don’t betray a bitch), her due while only briefly mentioning Escobar. For those of you asking why Blanco hasn't been given the Escobar treatment, be patient—there’s a movie about her on the way. 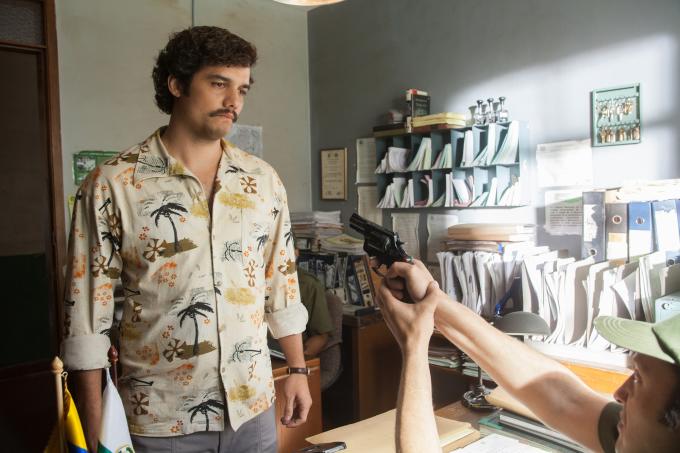 Hollywood likes to make movies about the drug and mob worlds, because they’re filled with violence, amoral behavior (see: Scarface, Goodfellas​, and everything else) and an array of fascinating characters that lived a pimp lifestyle but eventually met their comeuppance in prison or death. The ’80s were the height of the drug war, something that continues in Mexico with El Chapo and the like, but Hollywood likes to glorify these tales—which is one reason Narcos is so compelling. From Escobar’s early days of smuggling cigs, booze, and weed to masterminding the cocaine labs in the middle of the South American rainforests to establishing the first narco-dedicated routes from Colombia to America, we love epic sagas of people like Escobar who rose from nothing and eventually owned 800 haciendas—it’s kind of the American dream.

The inverse of deifying the violence depicted in these films and TV shows is the grave aftermath of what Escobar left behind, in his son, daughter and wife. The son, Juan Pablo, was 16 when his father died. In the 2009 doc Sins of My Father, the film chronicles Juan, who fled to Argentina and changed his name to Sebastián Marroquín. He emotes what it was like to have Escobar as a dad, and then he meets with a couple of the sons whose fathers Escobar had brutally murdered. In the film’s trailer, Juan Pablo explains what he learned from his dad: “The most important one is that if I want to live I have to do the opposite from him.”

Are more biopics about Escobar’s tyrannical reign necessary? Probably not. But Escobar's life contained multitudes, making it possible for there to be an endless stream of projects made about him. Hell, an entire film about Escobar’s hippos or his affair with reporter Virginia Vallejo​ would be worth watching. Oh, the latter's already in the works with Penelope Cruz and Javier Bardem. Well then, how about a comedy called Club Medellin, focused solely on Escobar (Seth Rogen, perhaps?) throwing insane parties at his prison crib?

All kidding aside, what Narcos does different—and best—from any other film or TV representation of Escobar is it analyzes the complicated war from all sides, showing the gray areas, the villains and heroes, which all seem to blur together. As Murphy’s voice overstates at the end of episode eight, “There’s one thing I’ve learned down here in Colombia: Good and bad are relative concepts.” It’s up to the viewers to decide whether Escobar was a villain or a hero (25,000 Colombians did attend his funeral). If Escobar were still alive, how would he feel about all of the scrutiny of his incredible life? Eh, I’m sure he’d smoke a joint, and relish every minute of it.